The Romanesque tympanum was the ultimate artistic achievement of the early twelfth century. After the triumphal arches of Late Roman Antiquity, large scale monumental sculpture was absent from Europe for more than six hundred years before being dramatically revived in the final decade of the eleventh century, when the great Romanesque church portal reliefs were begun.

The Romanesque world viewed reality and art as being imbued with multiple layers of meaning. The function of the great portal relief sculptures was to combine these layers into a single richly symbolic form which would act as a conduit to guide man to the essential truth. 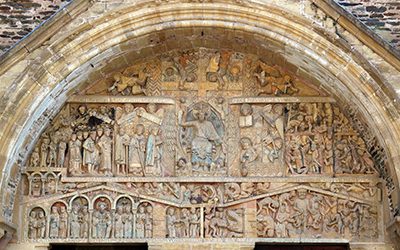 The Romanesque Tympanum of Conques

The Romanesque tympanum of Conques was created in the first half of the twelfth century and its size and quality at this extremely remote site are a testament, both to the power of the cult of a saint’s relics and the importance of the pilgrimage to Compostela. 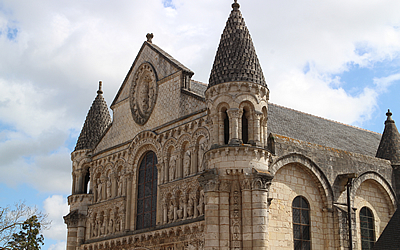 The Romanesque Facade of Poitiers: Notre-Dame-la-Grande

The western facade of Notre-Dame is perhaps the most elaborately carved of all Aquitanian churches and its iconographic programme was intended as an epic celebration of the role of the Virgin Mary in the narrative of Christian salvation history. 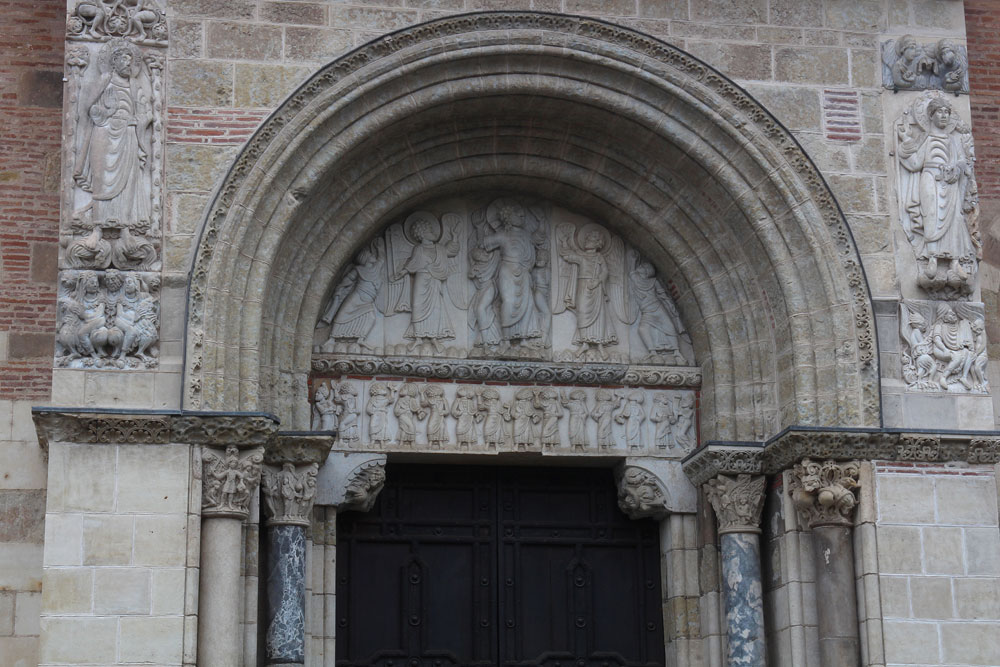 The Porte Miègeville was so named because it was at the end of the street which connected the great suburban basilica of Saint-Sernin to the centre of Toulouse. Every element from the tympanum, the lintel, the spandrels and consoles down to the four capitals which surmount the columns either side of the doorway, were combined to form a complex yet coherent visual discourse on the theme of the Ascension.

The Romanesque Tympanum of Saint-Etienne de Cahors depicted the Ascension and the martyrdom of Saint Stephen. The Ascension was the favoured theme of the first portal sculptures which emerged from the sphere of influence emanating from the Burgundian abbey of Cluny at the end of the eleventh century.

The Romanesque Tympanum of Beaulieu-sur-Dordogne

The Romanesque Tympanum of Beaulieu-sur-Dordogne is a key work of twelfth century monumental stone sculpture. One of the principal monasteries of the Cluniac Order, the abbey of Saint-Pierre de Beaulieu was situated on the banks of the Dordogne river. Strategically positioned on the Compostela road, it was a key point of passage between the two regions of the Limousin and the Quercy.

The Romanesque Tympanum of Moissac

The south porch tympanum at Moissac is one of the most sublime achievements of Romanesque art. A transcendental mysticism had entered Latin Western Christendom from the East in the ninth century. At the centre was the Divine One, immobile and eternal, surrounded by a Celestial Hierarchy and Cosmos that was in a state of continuous movement.

The Romanesque Tympanum of La Lande-de-Fronsac

La Lande-de-Fronsac lies fifteen miles north east of Bordeaux on the northern banks of the Dordogne river on the Tours Road to Compostela. Its portal relief sculpture is singular in being the only monumental representation of the first theophanic vision from the Book of Revelation in Romanesque sculpture. 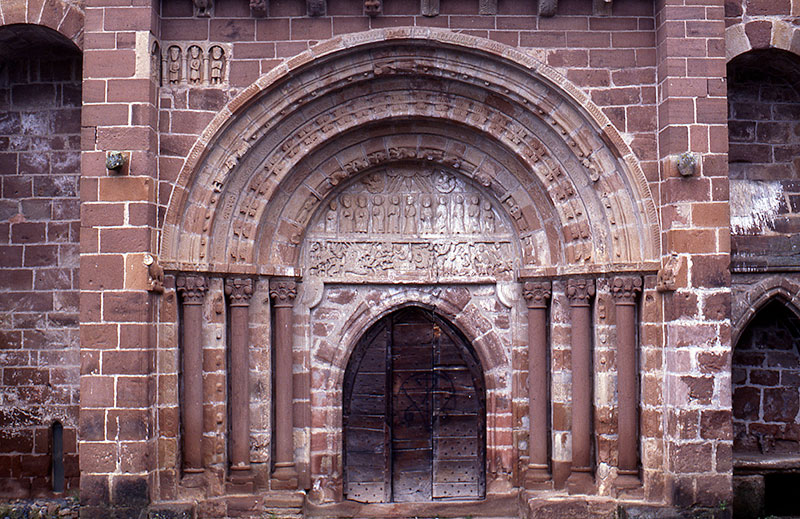 The tympanum of the church of Perse at Espalion features a dramatic carved Romanesque relief. Located above its southern porch entrance and carved in the distinctive red sandstone in which the whole building is constructed, the theme is both singular and perplexing. The subject combines the Effusion of the Holy Spirit with the Resurrection of the Dead and is unique in Romanesque portal sculpture. 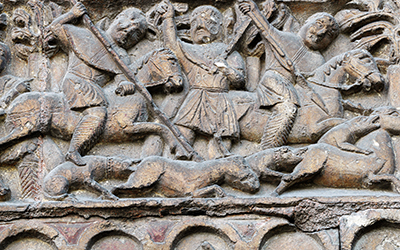 It was not uncommon for the reliefs on the facades of Romanesque churches to reference the efficacy of the saintly relics within. The most striking example may be be that of Sainte Foy at Conques. The same is true of Saint Ursinus of Bourges, albeit in a more oblique manner.

The Transfiguration: Tell the vision to no man, until the Son be risen again

The tympanum sculpture of the Transfiguration at the Cluniac priory church of Notre-Dame de la Charité-sur-Loire in Burgundy is the only large scale Transfiguration in twelfth century Romanesque sculpture, apart from the putative remnants now situated above the Platerias Portal at Compostela.

The Temptation of the Lord was the subject of one of the sculpted reliefs over the south transept entrance to the cathedral of Compostela. The iconography of the reliefs on the double tympana of the Puerta de las Platerías at Compostela was intended as a direct thematic extension from the scenes of the Expulsion from Paradise on the north portal.

La Puerta de las Platerias: The Tympanum of the Instruments of the Passion

The Compostela Tympanum of the Instruments of the Passion formed part of a broader symbolic narrative. Thematically, the portal reliefs of the south transept entrance of the cathedral of Santiago de Compostela follow directly from those of the Porta Francigena.

The Romanesque Tympanum of the Chrismon of Jaca

The Romanesque tympanum of the Chrismon of Jaca differs radically from the figurative sculptural ensembles which emerged at Toulouse and Compostela by the nature of its deeply allegorical and quasi hieroglyphic style.

The Chrismon of Aragon

Images of the Crucifixion are rare in large scale Romanesque sculptural ensembles. In the Church’s militant period of the Crusading era, a more triumphalist symbol was to be preferred. In northern Spain, this was conveyed in the form of the Chrismon and is frequently found, most particularly in Aragon and to a lesser degree in Navarre.

The Romanesque façade of Saint Gabriel de Tarascon presents at first a rather enigmatic prospect. The architectural forms are composed of stylistically disparate elements. The sculptural work seems disconnected with no discernible coherent iconographic theme.

In the canon of eleventh and twelfth century sculpture the Romanesque façade of Saint-Gilles du Gard on the Compostela Road is remarkable and stands significantly apart from its contemporaries. The façade of the abbey church is the largest sculptural ensemble of Romanesque art in the whole of the Languedoc region.

Depicted on the sculpture above the doorway is the Old Testament narrative of the Offering of Isaac. From the Visigothic church of San Pedro de la Nave near Zamora to the capital relief at Jaca, this subject seemed to hold a special fascination for the  Christians of medieval Spain.