The Ascension was a central theme in monumental Romanesque sculpture. It was the subject of the sculpted relief, completed in 1115, of the central portal of Cluny abbey, the largest church in medieval Christendom. The design was a simple one: Christ in a mandorla supported by a pair of angels.

The Romanesque world viewed reality and art as being imbued with multiple layers of meaning.

The function of the great portal relief sculptures was to combine these layers into a single richly symbolic form which would act as a conduit to guide man to the essential truth.

The first portal reliefs which emerged from the Burgundian sphere of Cluny made use of a motif which originally had its source in Roman funerary art.

This was of the funerary apotheoses carved onto antique sarcophagi, depicting the head of the deceased enclosed in a circular frame held aloft by two winged figures, signifying assumption into a paradisaical afterlife. 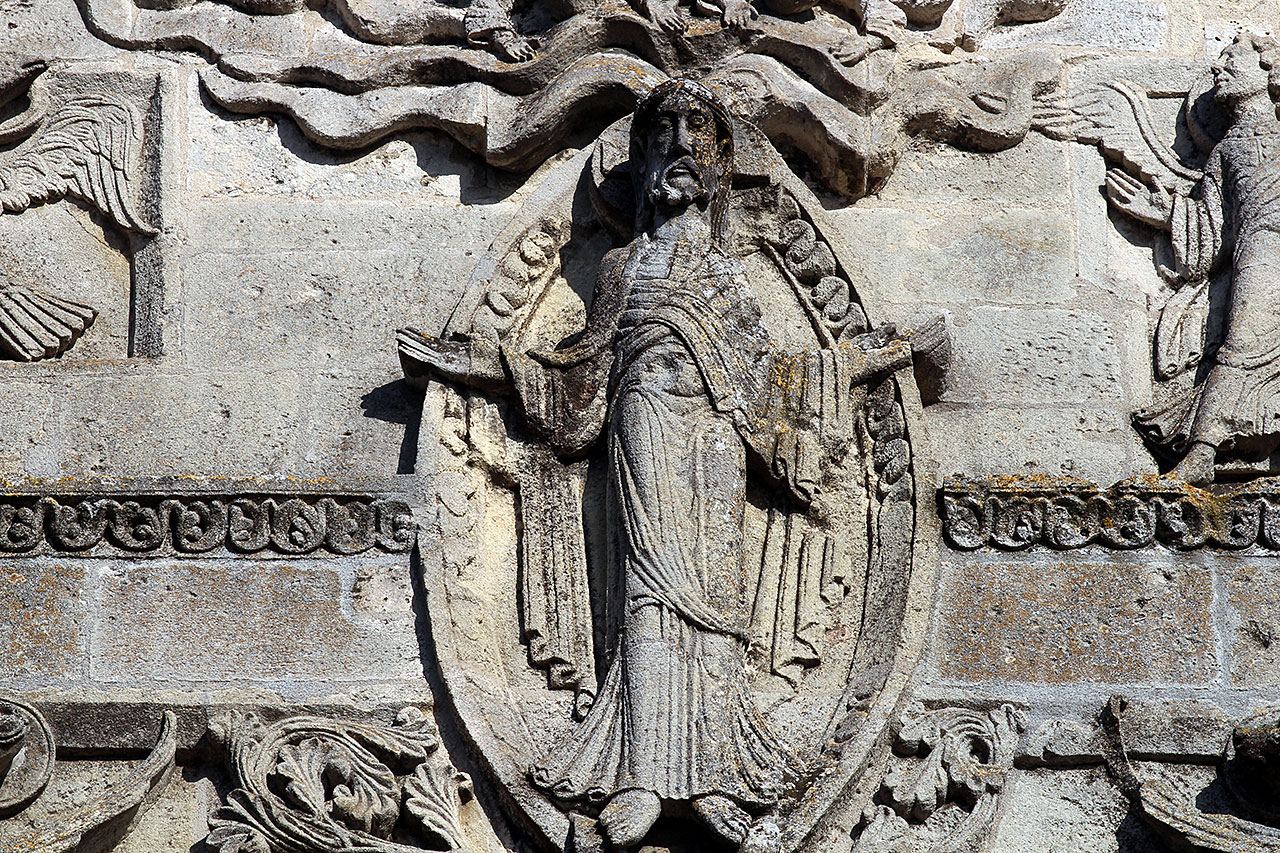 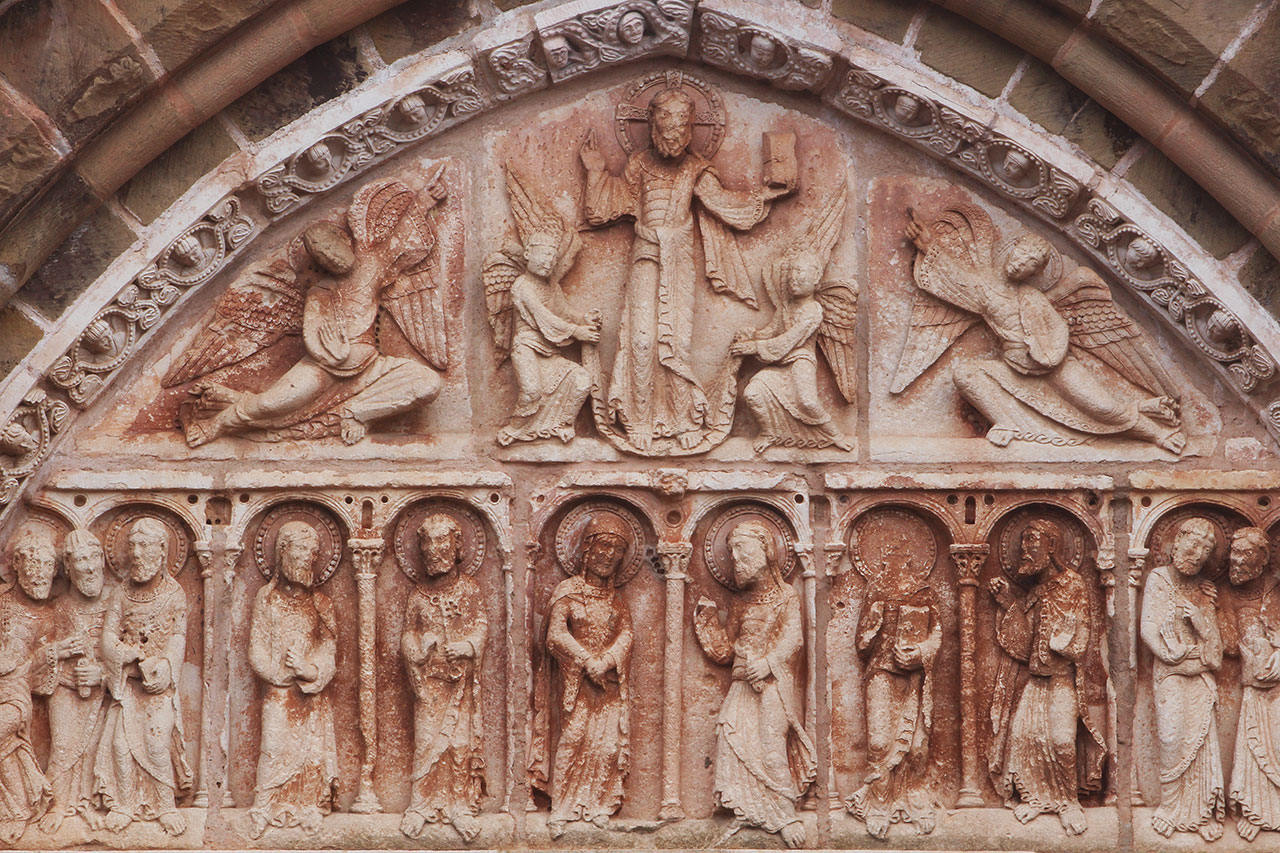 The reliefs of the Burgundian monasteries depicted Christ in a mandorla representing the celestial realm, supported by a pair of angels. This was an image of the Ascension.

Early Christian commentators had seen the Ascension as a prefiguration of the Second Coming. This arose from the account in the Acts of the Apostles whereby, two men dressed in white appear to tell the disciples that Christ will return ”in like manner”. Attributes associated with the Apocalypse were incorporated, in particular with the addition of the Four Living Beasts.

Traditionally, a second register was included showing the Virgin Mary and the Apostles. These latter additions were necessary to symbolise the human dimension of the theophany by representing the Incarnation and the Bearing of Witness.

According to Gregory the Great, “Our Saviour, as it is written in the scriptures was not taken by a chariot like Eliah or carried by angels. He who created all rose to Heaven by his own force”. However the Romanesque depiction of the Ascension became the dominant theophanic image during the second half of the eleventh century up until the middle of the twelfth.

It found a multitude of forms and was not intended as a simple literal depiction of the event described in the New Testament. Its true function was to act as an iteration of the Neoplatonic metaphysics which had reached the West from Byzantium during the course of the ninth century and which had later been taken up by Cluny. Accordingly, it was proposed that man had acquired the capacity to grasp, at least partially, the Divine Nature in the same way as the angelic orders.

Odilon de Mercoeur, fifth abbot of Cluny had written in the early eleventh century, “the angels of the Ascension appeared in white garments because the human race which had been covered by the dark because of a mortal blindness had merited, by the Grace of God to wear the garment of eternal joy and acquire angelic dignity”. 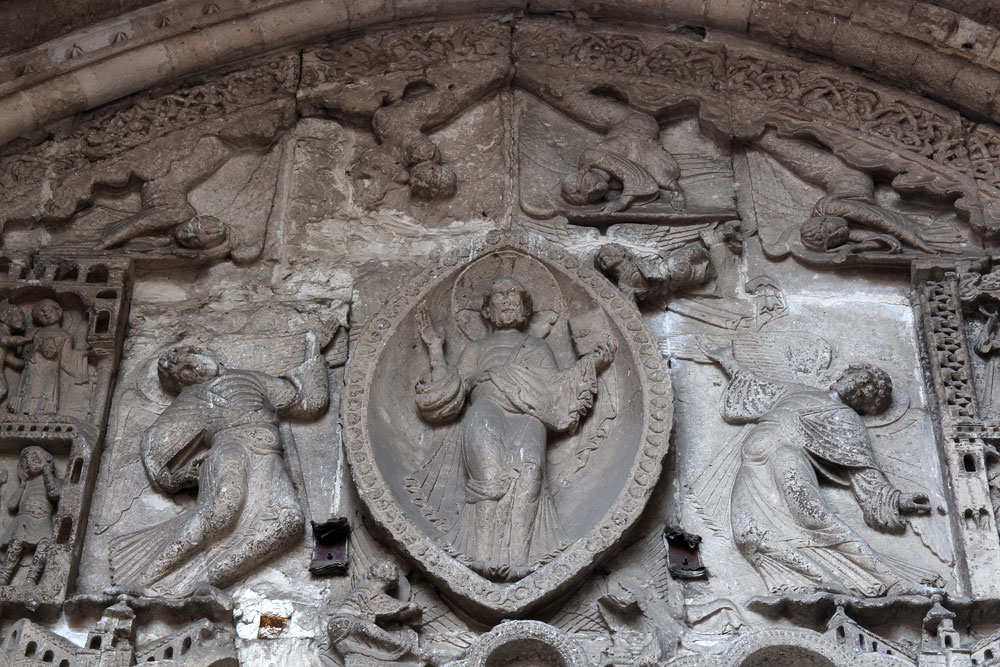