The angels, they also doubted

The Porte Miègeville was so named because it was at the end of the street which connected the great suburban basilica of Saint-Sernin to the centre of Toulouse.

The stone carved relief ensemble above the entrance was perhaps the first fully realised Romanesque monumental work and has been dated to the first decade of the twelfth century. The portal sculpture is carved out of white marble. 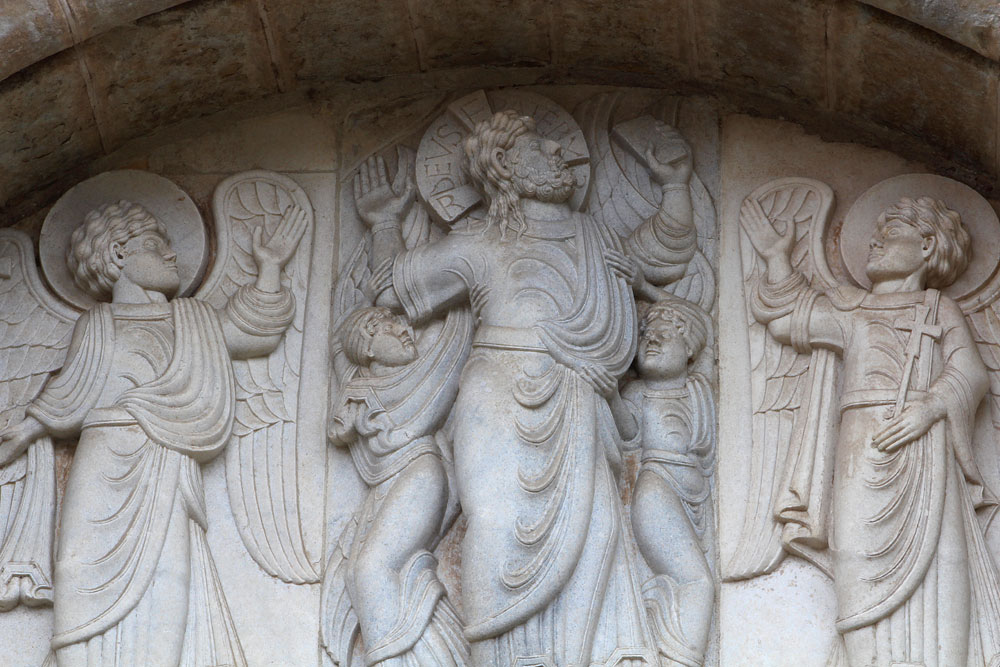 Paul the Silentiary, a sixth century Byzantine poet, when describing the newly built Hagia Sophia at Constantinople, wrote that white marble was a “visual signifier of the sacred”. The white marble of Toulouse was intended to represent the omnipresence of God.

Every element from the tympanum, the lintel, the spandrels and consoles down to the four capitals which surmount the columns either side of the doorway, were combined to form a complex yet coherent visual discourse on the theme of the Ascension.

The Miègeville tympanum shows a very human Christ being physically supported by a pair of seraphim. This type of portrayal of the Ascension had been largely abandoned from the fifth century to be replaced by a more stylised, frontal image of Christ enveloped in a mandorla.

The change had reflected the Trinitarian concerns in the wake of the Arian controversy and the formulation of the Nicene Creed which had led to a greater emphasis on Christ’s divine nature.

However, the theme of the Miègeville sculptural programme is taken from an exegetical tradition derived from early Greek writers and which had been transmitted to the West by Ambrose of Milan. These authors interpreted and amplified Psalm Twenty-Four as a prophetic text describing the Ascension. 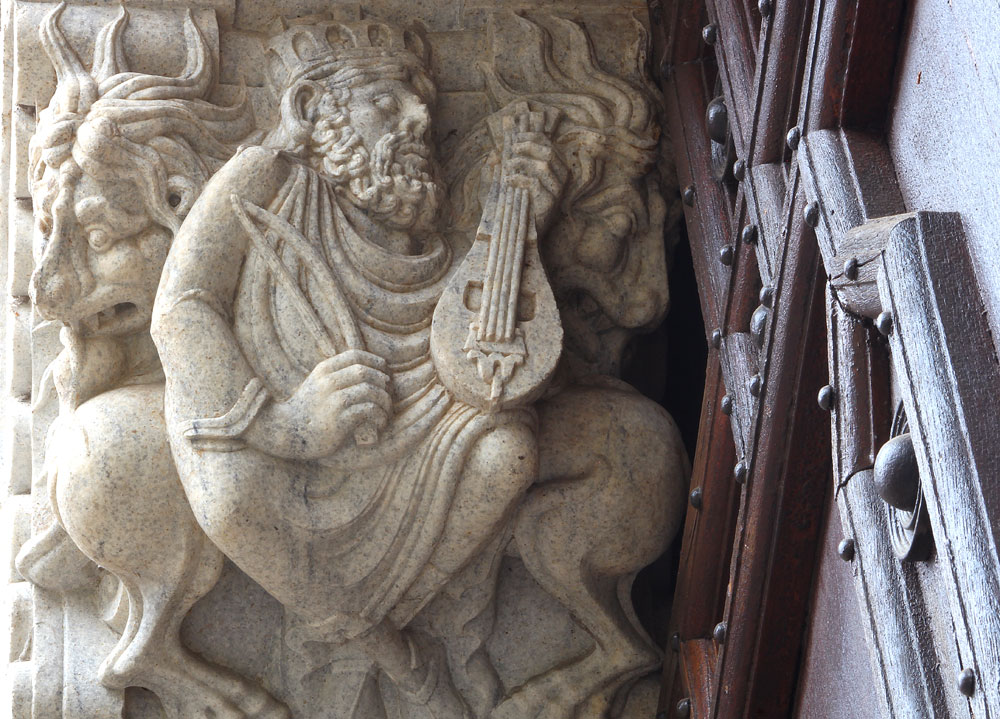 The carved console image of King David, credited as the Psalm’s author, on the upper left of the doorway is an indication of that connection.

The Psalm asks, “Who shall ascend into the hill of the Lord?” answering that it will be the “King of glory”.

There is then a repeated refrain of  “Who is this King of glory?” and calls for the Gates of Heaven to be lifted to allow him passage through.

Ambrose and his predecessors proposed that as Christ rose from earth, he was not recognised by the angels of Heaven because of his human form. 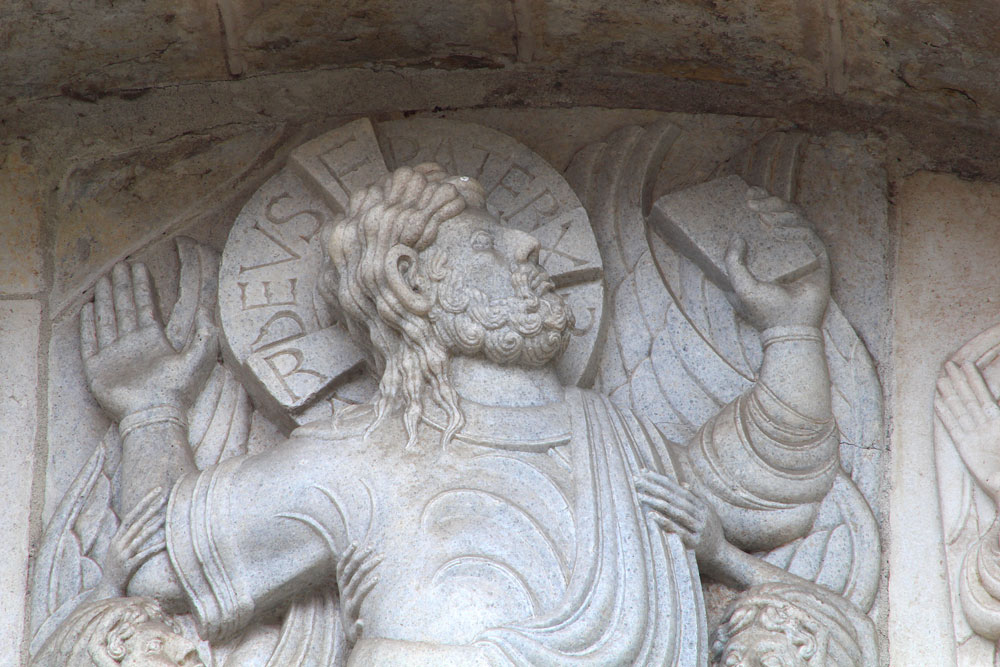 “The angels, they also doubted when the Christ resuscitated, when they saw that the flesh ascended from the earth to the heavens”, wrote Ambrose.

Taking his cue from the Psalm, Ambrose continued, “They said then: who is this King of glory?” The halo surrounding Christ proclaims him Rex, as well as Deus and Pater.

That the angels of Heaven, themselves, had failed to recognise Christ’s divinity at the immediate moment of his passage from the terrestrial to the celestial made the miraculous nature of the Ascension more evident. 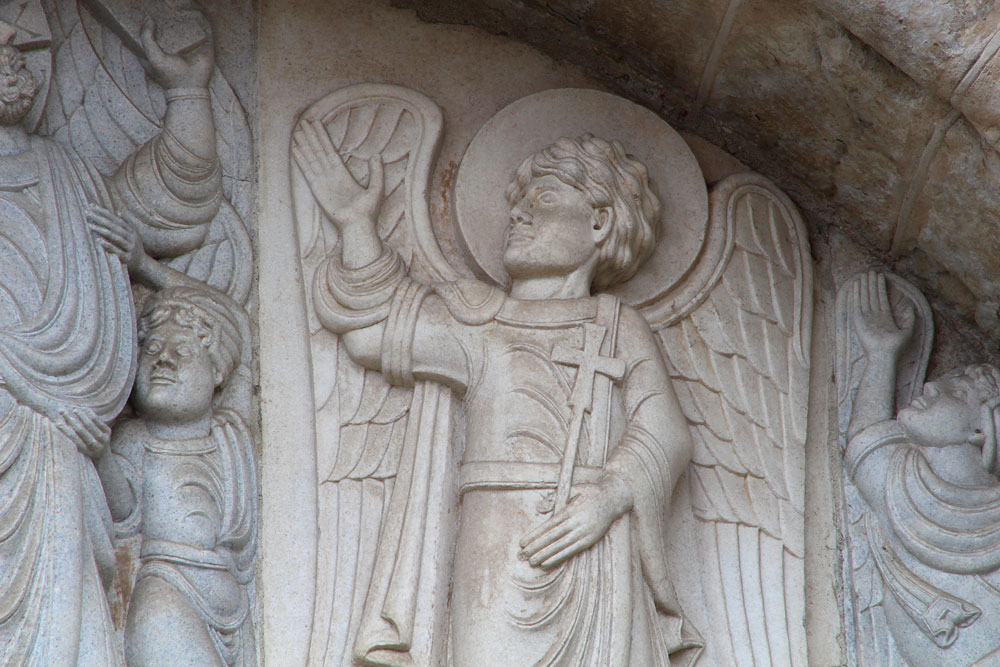 It also emphasised the notion that Christ was the first to ascend from Earth to Heaven and the first to be transformed from the human to the spiritual, paving the way for the future redemption of humanity.

The sceptre bearing angels of the Miègeville tympanum represent Christ’s escort, who according to Gregory of Nazianzus, call out to the angels guarding Heaven and “command that the doors raise their lintels to receive him who is grown in stature by the Passion.”

Throughout the rest of the sculptural programme are elements which reinforce and expand this interpretation of the Ascension.

The console opposite King David the Psalmist, depicts two shepherds who have dominated a pair of lions, a familiar symbol of Death. 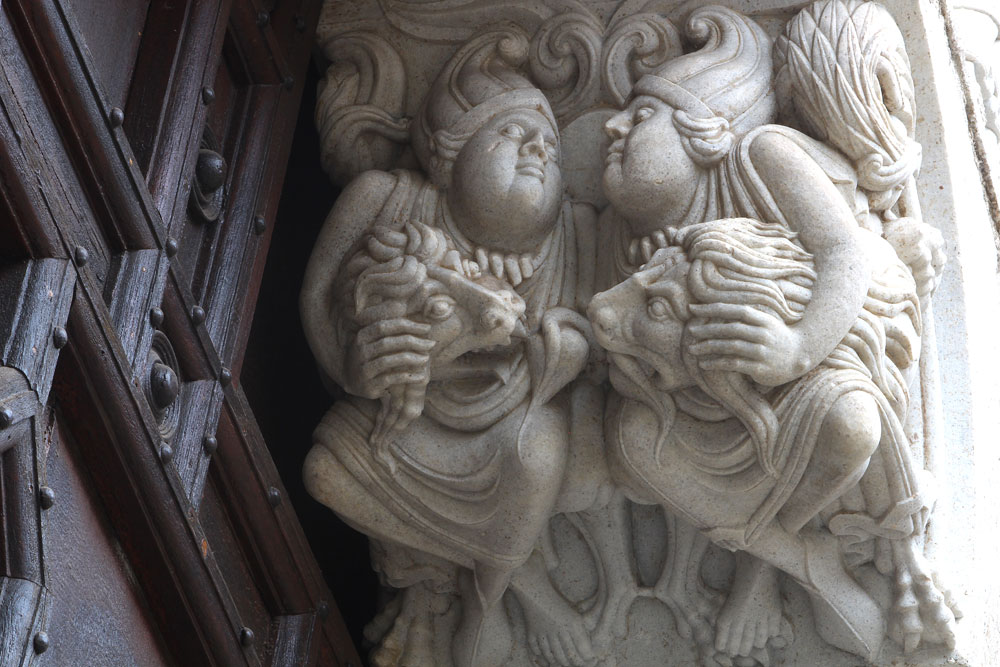 They each have one foot shod, the other bare. These so-called monosandaloi were known throughout the Classical and Celtic worlds as figures representing a transition from one state to another as in the case of the Ascension above them.

The narrative arc of the sculptural programme begins with the capitals on either side of the doorway.

Adam and Eve are expelled from Paradise and an angel guides Adam away from Eden to be separated from direct contact with the Divine and condemned to mortality.The angel who bars Adam from the Gates to Paradise is intended as the antithesis of the angels of the tympanum who call for the Gates to be reopened. 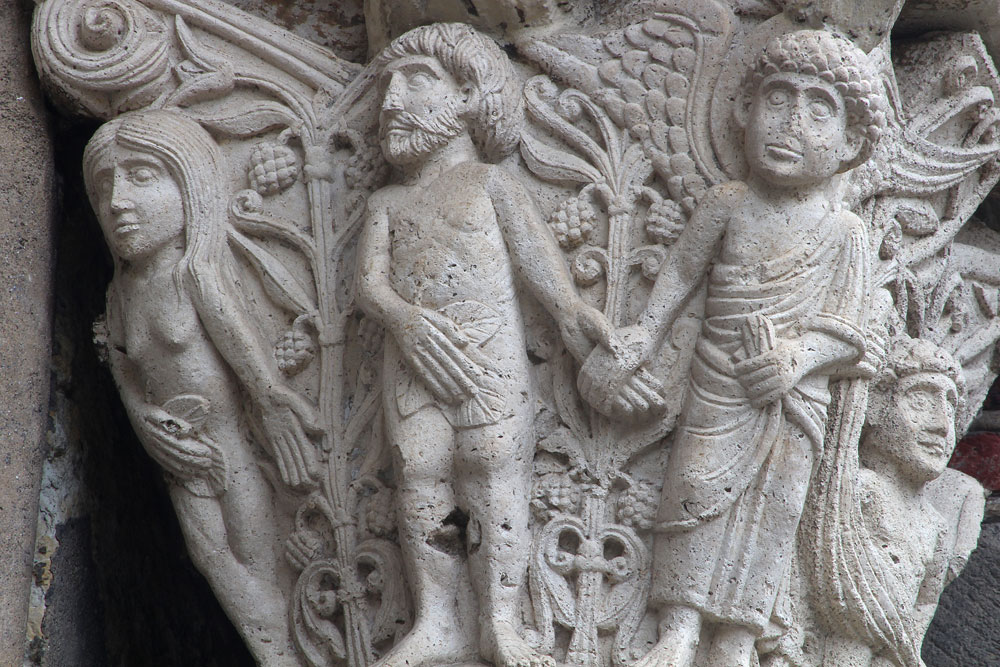 Immediately to the left of the angel, a naked figure holds a billowing drapery. Such figures were familiar from Roman sarcophagi where the cloth represented the vault of Heaven. At Miègeville, the deflated drape suggests the temporary abeyance of Grace and Salvation.

This capital is paired with the Massacre of the Innocents, a prefiguration of Christ’s sacrifice and Passion, the necessary prerequisite for this Redemption. 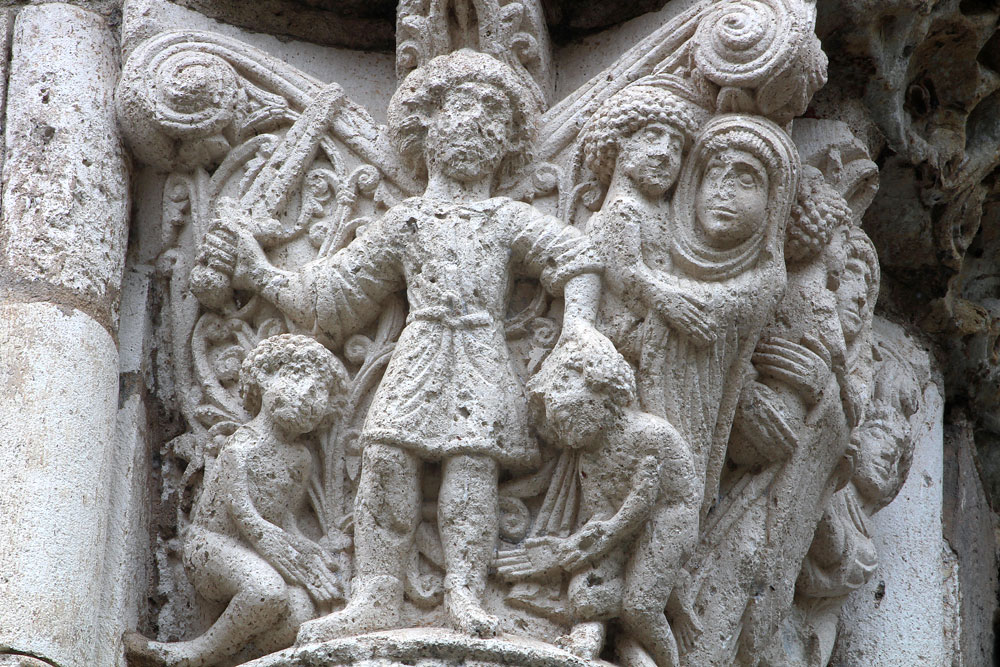 A reused sarcophagus forms the lintel and shows the apostles gazing up heavenwards. At each end are the angels reminding them that the Ascension was a prefiguration of the Second Coming.

To the left an angel holds up an open scroll to which he draws the attention of the apostle who stands adjacent.

At the far right the second angel points to a closed book, while the apostle turns away in a gesture of refusal. 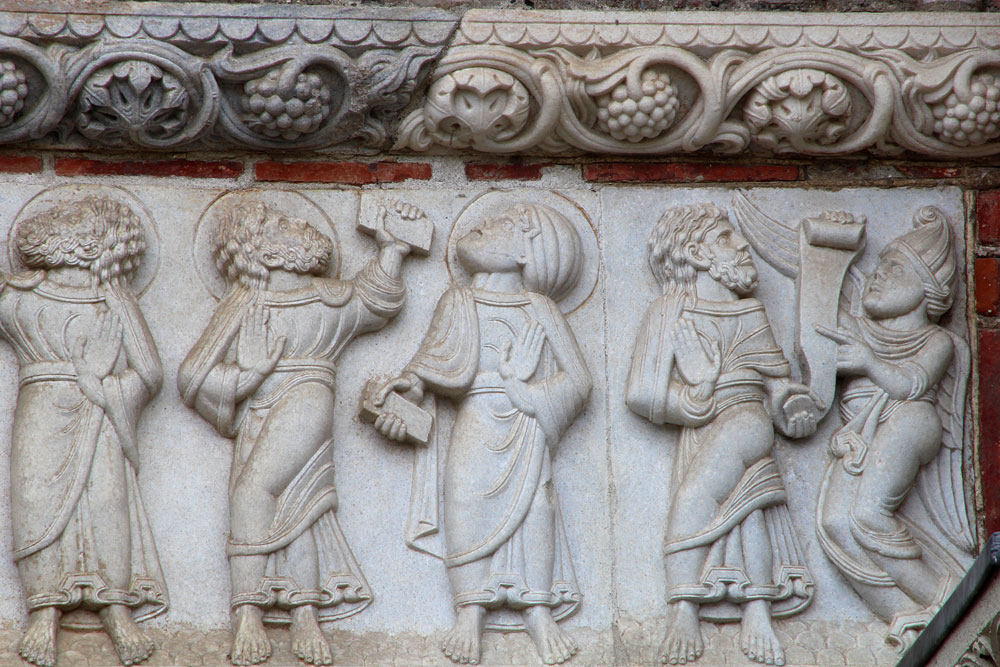 The Old and New Testaments. Time before and time after the Incarnation, the closed book the hidden mystery of the Second Coming, a reference to Matthew Twenty-four, “But of that day and hour knoweth no man, no, not the angels of heaven, but my Father only”.

On each side of the tympanum are a pair of spandrel reliefs of apostles, Peter and James the Major, who express the Mission of the Apostles which is implicit in the lintel depiction of the college of the apostles at the Ascension.

The spandrels are placed over pedestals, each of which depicts a form of heresy relevant to the general theme of the sculptural programme. Beneath James, Montanus, one of the most celebrated of early church heretics. 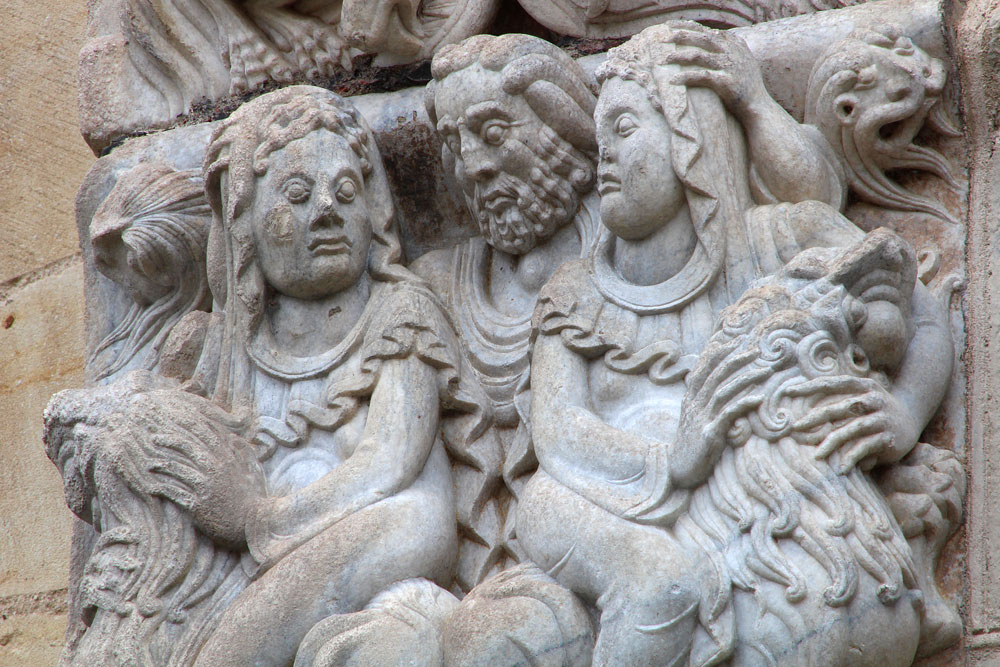 A priest of the cult of the Goddess Cybele who had converted to Christianity, along with his two female disciples Priscilla and Maximilla, Montanus claimed to be a prophet. The two acolytes ride lions, a reference to the goddess Cybele’s iconographic attribute.

Symbols of Death, the lions which appear elsewhere on the Miègeville portal are dominated and subject. The exception is the Montanus pedestal, where Priscilla and Maximilla mounted astride their animals represent Death unvanquished, an opposing polarity to the triumph over Death of the tympanum.

Saint Peter stands over a pair of lions and below him is the pedestal which contains the figure of Simon Magus being consoled by two demons.

A parodic antithesis to Christ’s Ascension, Simon Magus had claimed the supernatural powers which would enable him to fly. The inscription next to him reads, “Confounded by his magical art, Simon is defeated by his own weapons”.

The relief of Saint James shows him framed between two sprouting trees.

This iconography is at odds with his typical attribute of the scallop shell, however it is duplicated on the Puerta de las Platerías at Compostela with which the Miègeville Saint James bears such a striking similarity. 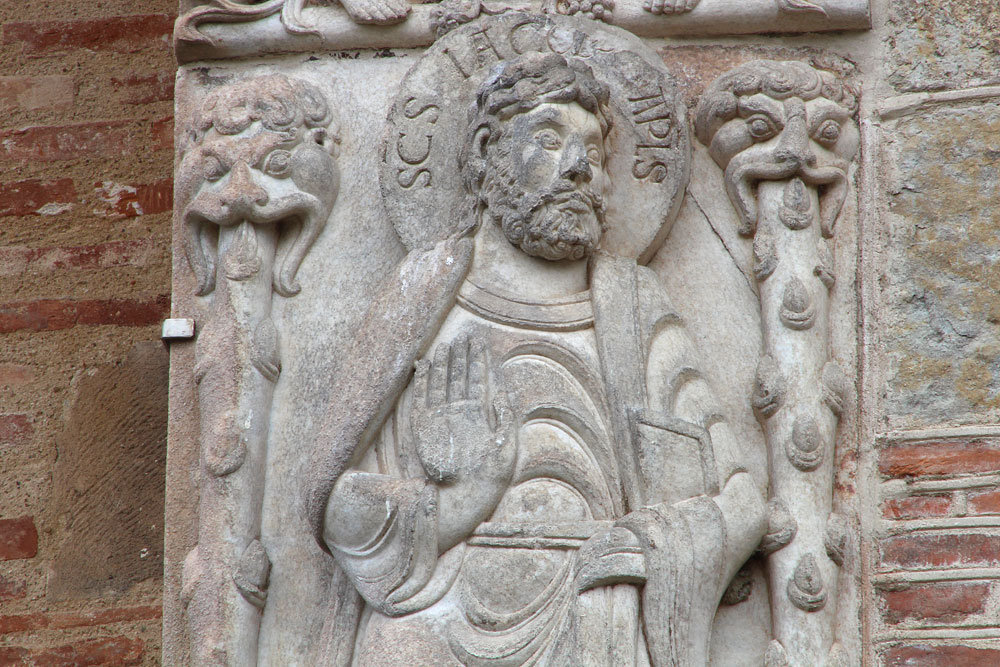 The relief of Compostela was intended for a programme dedicated to the Transfiguration on Mount Tabor and the Miègeville James reprises that most significant element of James’ identity.

Opposite is the figure of Saint Peter, also present at the Transfiguration. He bears the keys to heaven and flanked by the standard of the Church and the Eucharistic vine.

Saint-Sernin’s pivotal place in the Compostelan universe is powerfully affirmed by these spandrel reliefs, Saint Peter and Saint James, Rome and Compostela and the two evangelisers of the West.

Saint-Sernin had resisted Cluny’s attempts to absorb the Tolosian shrine into its federation as it made a concerted attempt to dominate the pilgrimage roads to Compostela in the 1080’s. Despite a number of reversals, the canons of Saint-Sernin had managed to keep control.

The programme of the Miègeville portal is distinctly different from the sculptural ensembles to be found in the Cluniac centres elsewhere in the south-west of France, at Moissac, Beaulieu, Carennac and Cahors, which all bore the heavy imprint of the Burgundian style which emanated from the mother abbey.

Further along the pilgrimage road an almost identical Ascension as the one at Toulouse is featured on the triptych porch relief of the Puerta del Perdón at San Isidoro de León which was an important reliquary shrine, similarly maintained by canons under the Rule of Saint Augustine.