The Romanesque Facade of Poitiers: Notre-Dame-la-Grande

According to legend the church of Notre-Dame la Grande at Poitiers had been founded by the Roman emperor Constantine.

This may have been the inspiration for the imperial equestrian statue which had once dominated the south porch entrance, although such depictions were not exceptional on the exteriors of Romanesque churches of Aquitaine.

However it was the western facade of Notre-Dame which drew the attention of visitors to the shrine. Of all Aquitainian churches it was perhaps the most elaborately carved and its iconographic programme was intended as an epic celebration of the role of the Virgin Mary in the narrative of Christian salvation history. Dominated by two registers of arcades whose figures represent the Apostolic tradition of the Church, the western end is surmounted by a triangular fronton bearing an image of Christ.

Surrounded by the Tetramorph and a motif of clouds and stars, this figure standing in a doorway set within the vault of the heavens is one of the most dramatic images of the Christ of the Second Coming in Romanesque art. 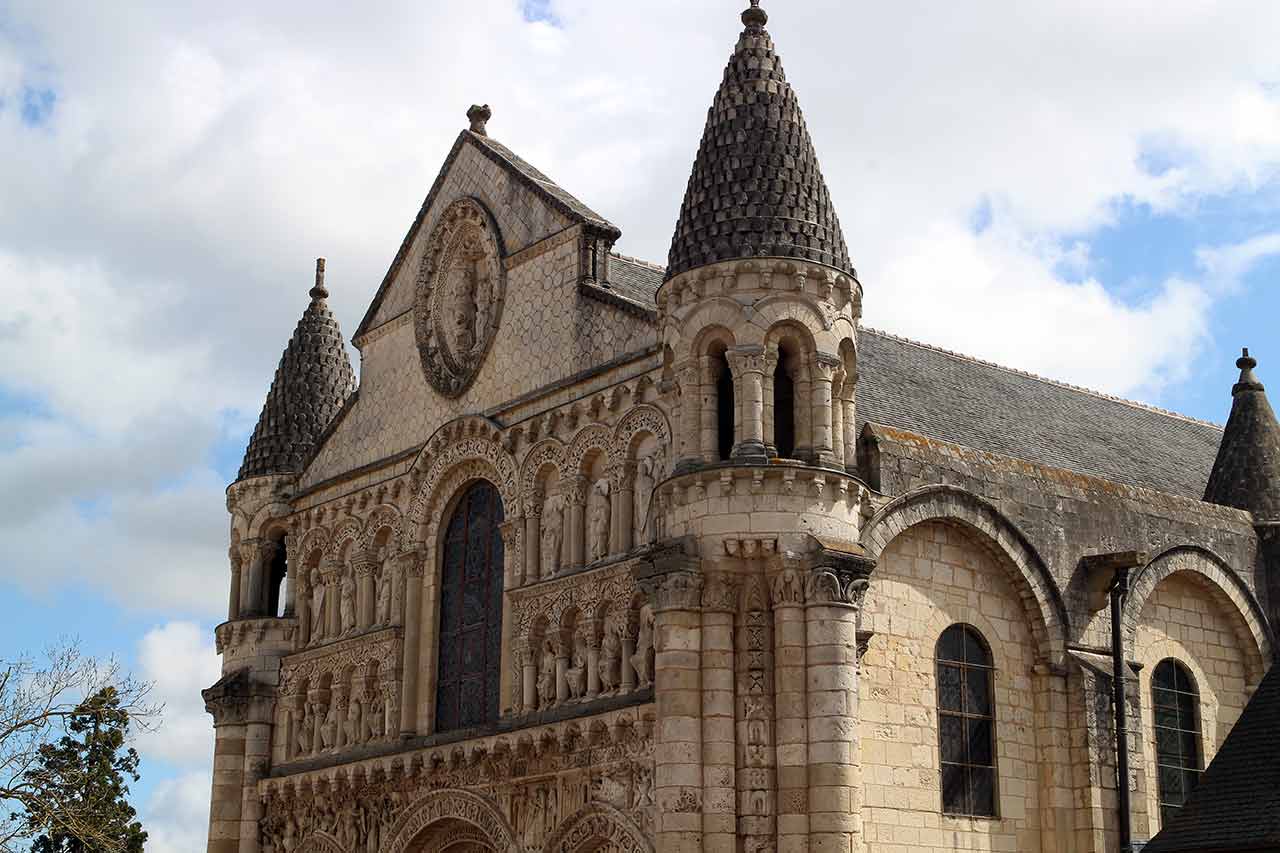 FROM THE FALL TO THE INCARNATION

At ground level a central doorway featuring four bands of archivolts with richly carved voussoirs is situated between a pair of blind arcades each containing a second pair of arcades. 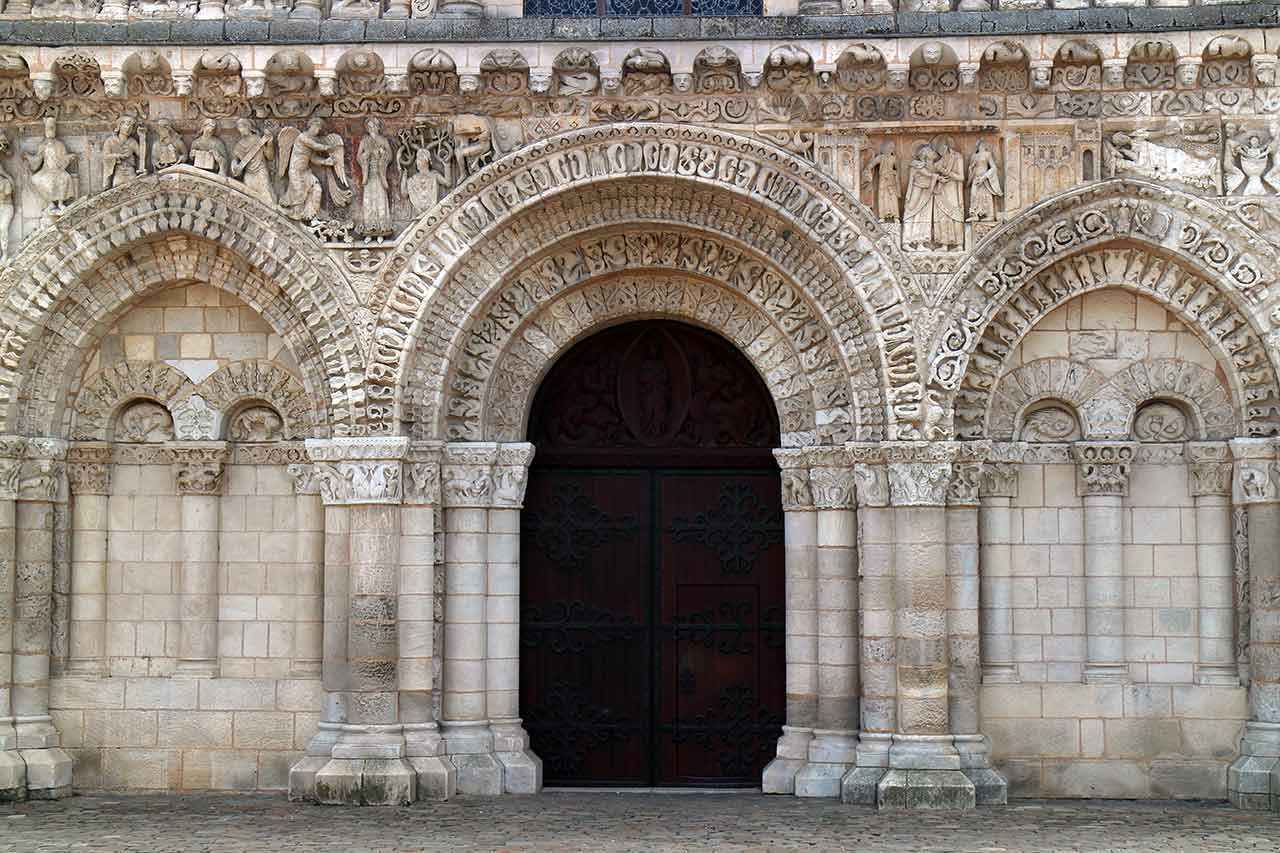 The archivolts rest upon twenty columns surmounted by carved capitals so that the façade at this level presents a dizzying array of bestiary figures.

Dividing this region from the arcades of the Apostles is a horizontal frieze which lies at the heart of the sculptural programme of Notre-Dame La Grande.

Beginning with the Fall, the scene of Adam and Eve by the Tree of Knowledge at Poitiers bears an inscription: “The crime of Eve brings to Man the origin of his affliction”, a declaration made all the more pertinent by the context of the theme of the façade’s iconographic programme which is the intervention of the Virgin Mary as the New Eve in the history of human salvation

From the Fall to the Incarnation the frieze is punctuated by two large-scale representations of the Annunciation and the Visitation and is an affirmation of the decree of the Council of Ephesus of 431 that stated that the Virgin was the Mother of God.

Furthermore, the iconography is derived from a number of very disparate but related sources whose purpose was either to prove or emphasise the verity of the Incarnation and the human aspect of Christ’s nature.

THE PROPHETS OF NOTRE-DAME LA GRANDE

To the right of Adam and Eve is a series of Old Testament figures; Daniel, Jeremiah, Isaiah and Moses.

Before these however, there is a crowned figure seated on a throne and whose inscription announces him as Nebuchadnezzar Rex. It was this king of Babylon who had been responsible for the destruction of Jerusalem and the deportation of the Jews into exile. For numerous commentators including Isidore of Seville and Raban Maur, Nebuchadnezzar followed the typological model of the Devil and yet according to tradition, the Babylonian king was the first Biblical figure to prophesy the future Christ.

This derives from the story of the Fiery Furnace from the Book of Daniel when the king saw, instead of just the three youths he had ordered to be cast into the furnace, a fourth whom he described as “Like the Son of God”.

The inclusion of Nebuchadnezzar on the frieze, alongside the prophets would be anomalous except that the façade of Notre-Dame is in fact the depiction of a medieval liturgical drama known as the Procession of the Prophets which featured among its cast the Babylonian king. 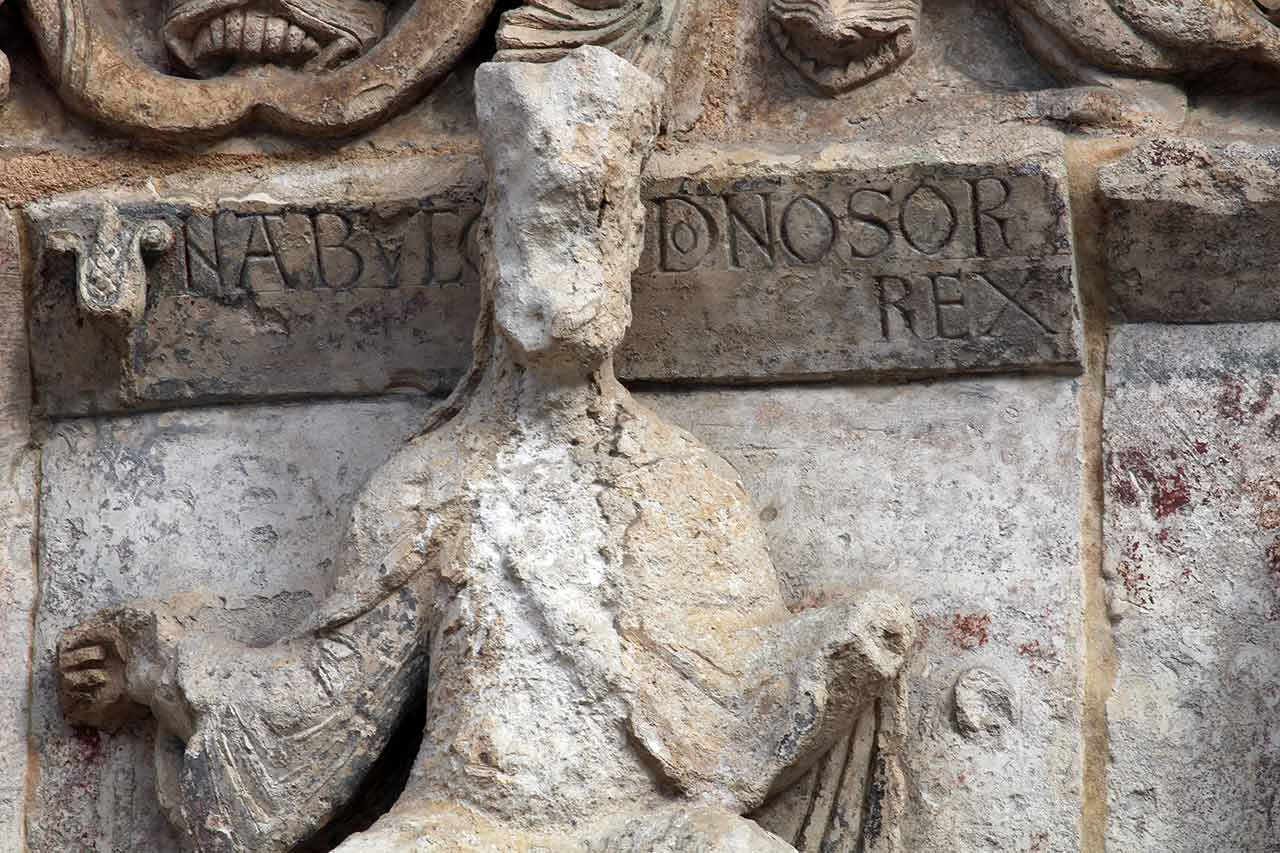 The Procession of the Prophets originated at the abbey of Saint Martial at Limoges and was derived from a tradition which went back to the fifth century. 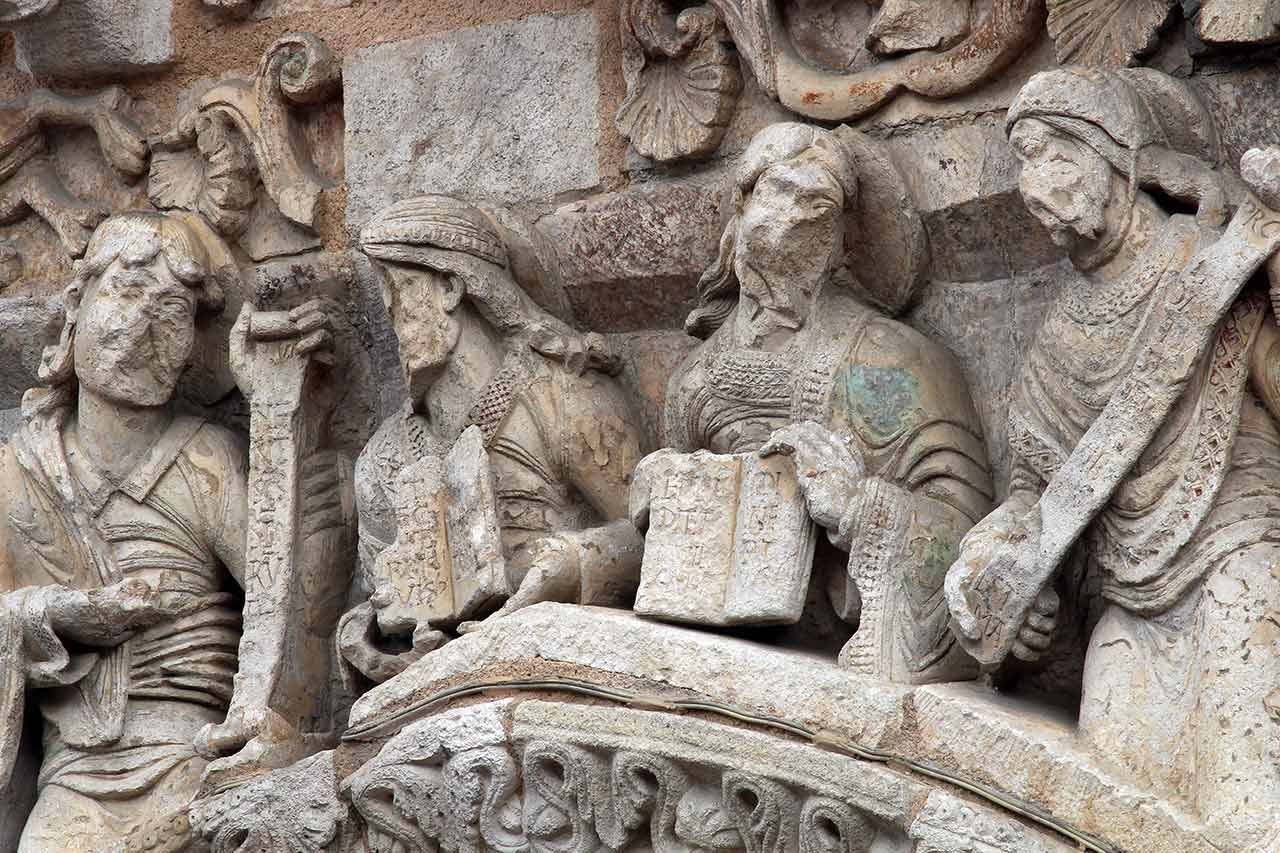 In the liturgy, the service was led by a cleric representing Saint Augustine and a range of witnesses were called to testify to the veracity of the Incarnation.

The drama was originally intended as a refutation to Jews, Pagan and Arians who refused to accept the Incarnation and its significance and it was traditionally performed on Christmas Eve.

The Pagans were addressed by the testimony of Nebuchadnezzar who admonished them that he had witnessed the prefiguration of the Incarnation in the Fiery Furnace.

All the Old Testament figures depicted at Poitiers; Daniel, Jeremiah, Isaiah and Moses make their appearance in the Procession drama where they address the scepticism of the Jews. The inscriptions on the phylacteries and codices held by the prophets of the relief sculpture refer directly to their predictions of the Incarnation.

The texts were drawn from the Old Testament and the non-canonical Book of Baruch and followed the exegetical readings of early Christian writers, principally Tertulllian.

THE INCARNATION OF NOTRE-DAME LA GRANDE

At its midway point, the frieze is interrupted by the rising outer edge of the main entrance arch. This separates the narrative into two distinct segments. On one side are the prophecies of the Incarnation which includes Eve, a prefiguration of the Virgin, and on the other is the Nativity itself.

The large-scale depiction of the Annunciation falls within the group of figures assigned to the prophets and the Old Testament. The Virgin is presented between two figures. On her right is Gabriel the archangel, effectively also a prophet of the imminent Incarnation.

To the left the patriarch Jesse is identified by the branches sprouting at the head, his striking figure refers to the inscription on the book held by the adjacent figure of Isaiah, that from Jesse would come a stem from which a branch would grow. Pointedly this was the very same text used in the drama of the Procession of the Prophets which had been identified by Tertullian as a prophecy of the Incarnation.

The presence of Jesse and next to him King David the Musician are there as reminders that Jesus was born of the human lineage of the Tree of Jesse and of the line of David, according to the genealogy described in Matthew and Luke. 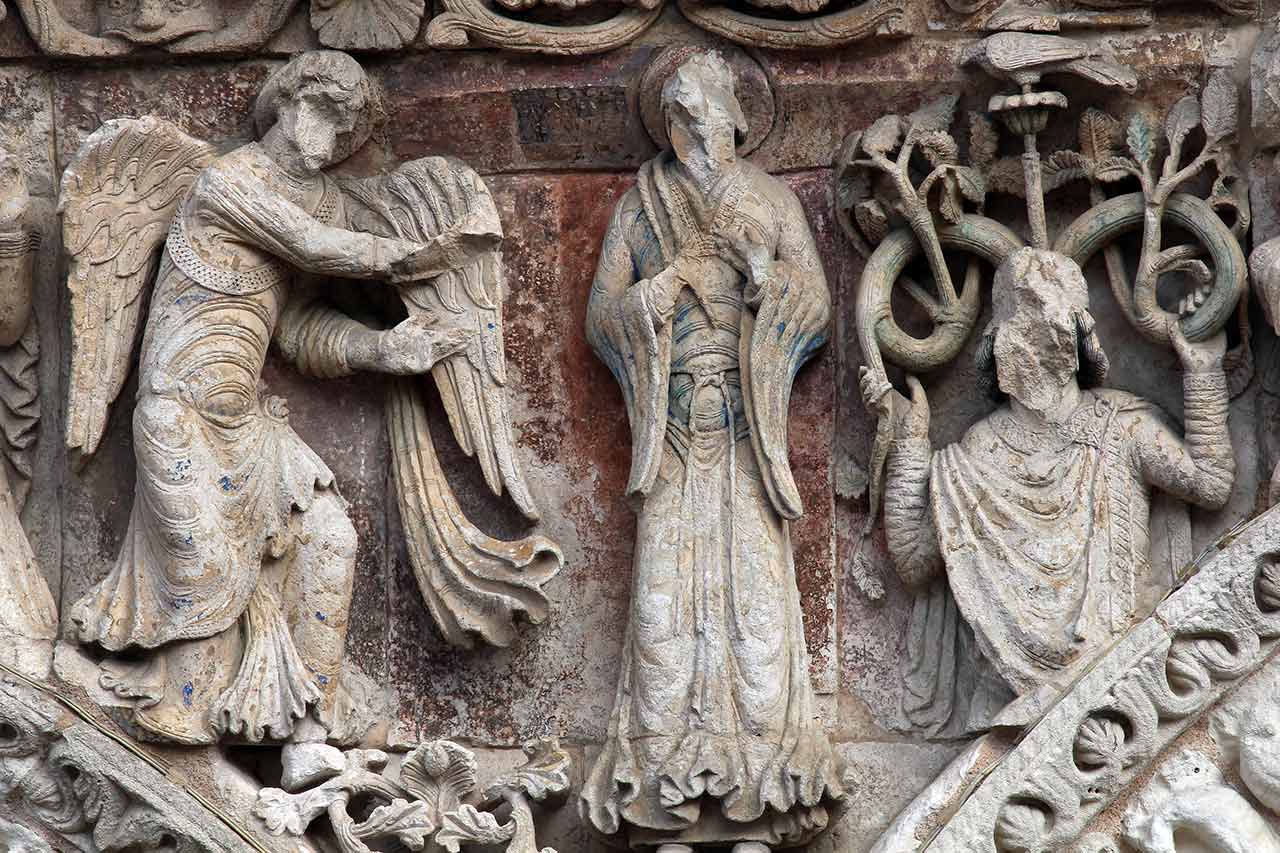 In the adjacent spandrel is a depiction of the Visitation. Forming a symmetrical pendant to the Annunciation, Elizabeth is shown caressing the belly of the Virgin, a pose designed to draw attention to her role as first witness to the Incarnation and fulfillment of the prophecies of the Old Testament figures which preceded. 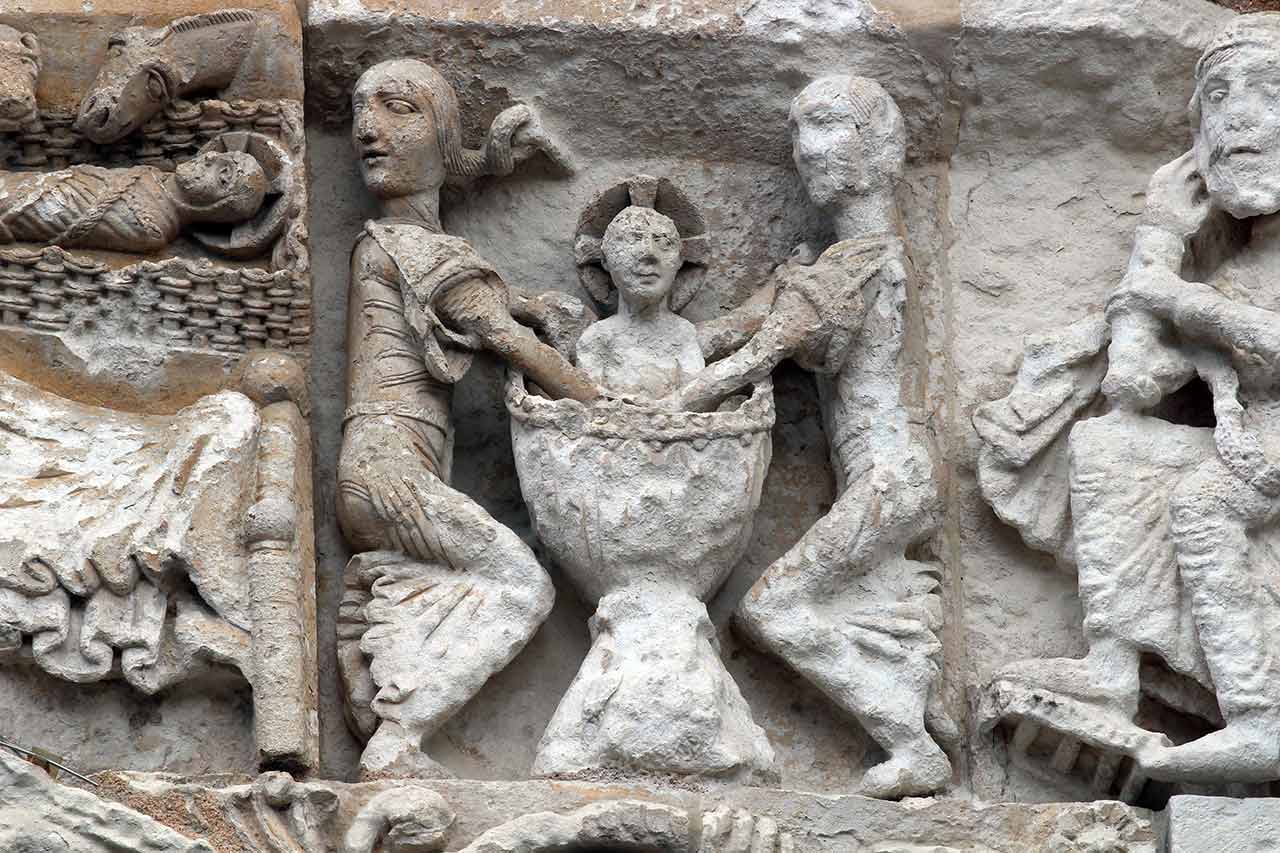 From Nazareth, depicted in the buildings shown next to Mary the narrative segues to its inevitable culmination, the Nativity itself.

The Virgin is shown prostrate on her bed, exhausted by the ordeal of childbirth and her arm extended in proclamation towards the infant in the crib.

The depiction of the manger drew upon a prophecy from seventh century Merovingian France known as The Book About the Origin of the Blessed Mary and the Childhood of the Saviour  which purported to be written by the evangelist Matthew, “Then was fulfilled that which was said by Isaiah the prophet, saying: the ox knoweth his owner and the ass, his master’s crib. The very animals, therefore, the ox and the ass having him in their midst incessantly adored Him”. The attribution to Isaiah was once more intended as a pointed reminder of the inherent veracity of the preceding prophecies.

The Nativity is immediately followed by a depiction of the Bathing of the Infant Jesus, a narrative detail mentioned in none of the Biblical texts, it was rarely featured in the Latin West but again served to reinforce the human aspect.

The infant Jesus is adorned with a haloed crucifix. The bath itself appears both like a baptismal font and Eucharist chalice, creating a correspondence between the Nativity, Baptism and the Passion.

Beneath the scene of the Bathing there is the image of a basilisk whose tail is turned into a vegetal motif with a flower adjacent to its head. Death overcome, the flower representing Resurrection and the Promise of eternal life.

With its series of prophetic figures and Nativity figures, the frieze was intended to perform the function of emphasising both the human and the divine nature of Christ and the inevitable teleological force of the narrative from its point of origin, the Fall to its culmination the Incarnation.

JACOB WRESTLES WITH AN ANGEL

Below the seated Joseph attending the Nativity scene is a pair of wrestlers, seemingly locked together in an embrace whose nature is hard to distinguish.

An inscription which accompanied the scene long ago became undecipherable however the image of the wrestlers at Poitiers has iconographic antecedents in depictions of the Genesis story known as Jacob wrestling with an angel, most notably on an early sixth century Syriac manuscript. The actual text refers not to an angel but someone who appears as a man and whom Jacob believes to be God.

Adam and Eve occupy the same space at the northern end of the façade as Jacob and the Angel and Joseph at the southern end. The one symbolising the disjunction between Man and God and the other, the conjunction of the Divine and the Human. Joseph, himself it was said was of the line of Jacob, representing once more the human aspect of the Incarnation.

Given the emphasis on the humanity of the Virgin and the Infant Jesus in the preceding images, the two wrestlers becomes a symbol in microcosm of the theme of the whole façade of Notre-Dame, the conjunction of the Divine and the Human. 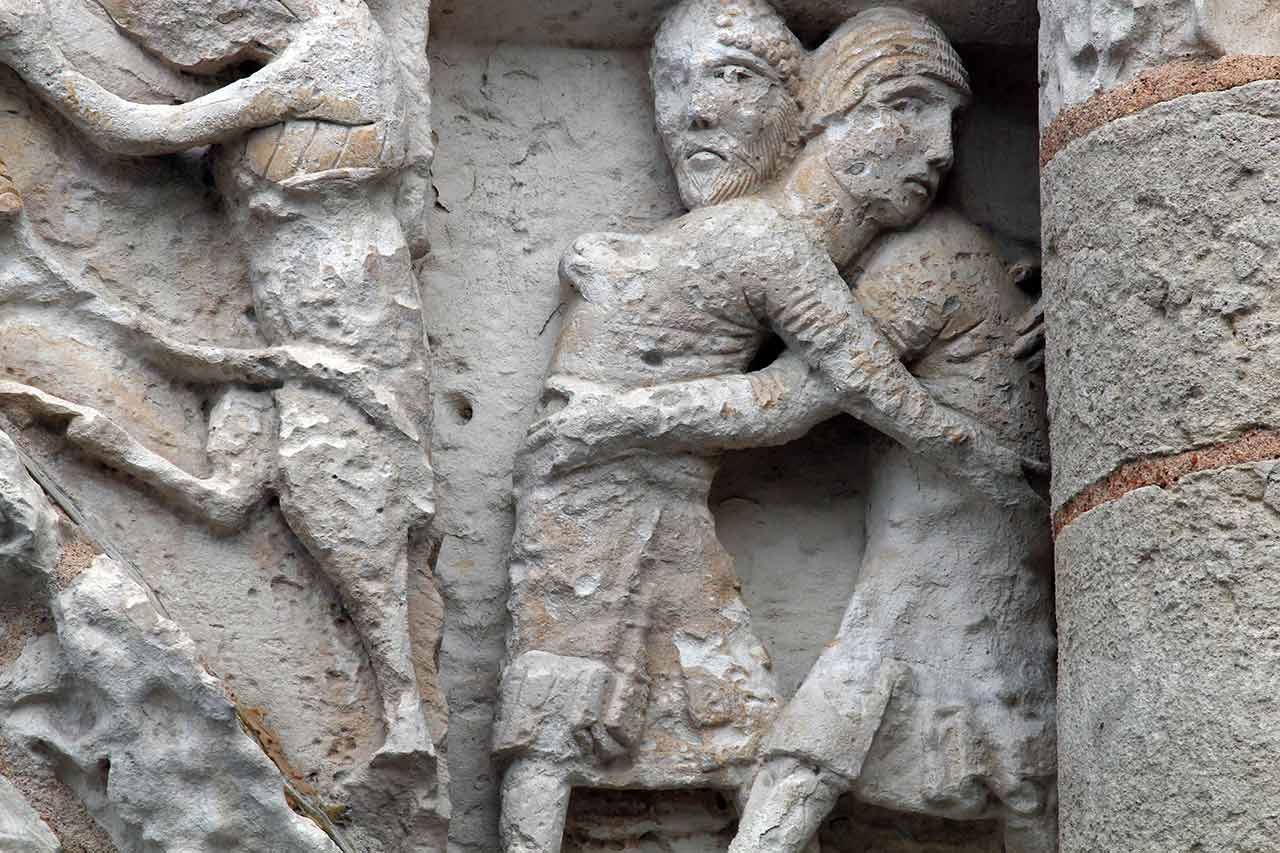 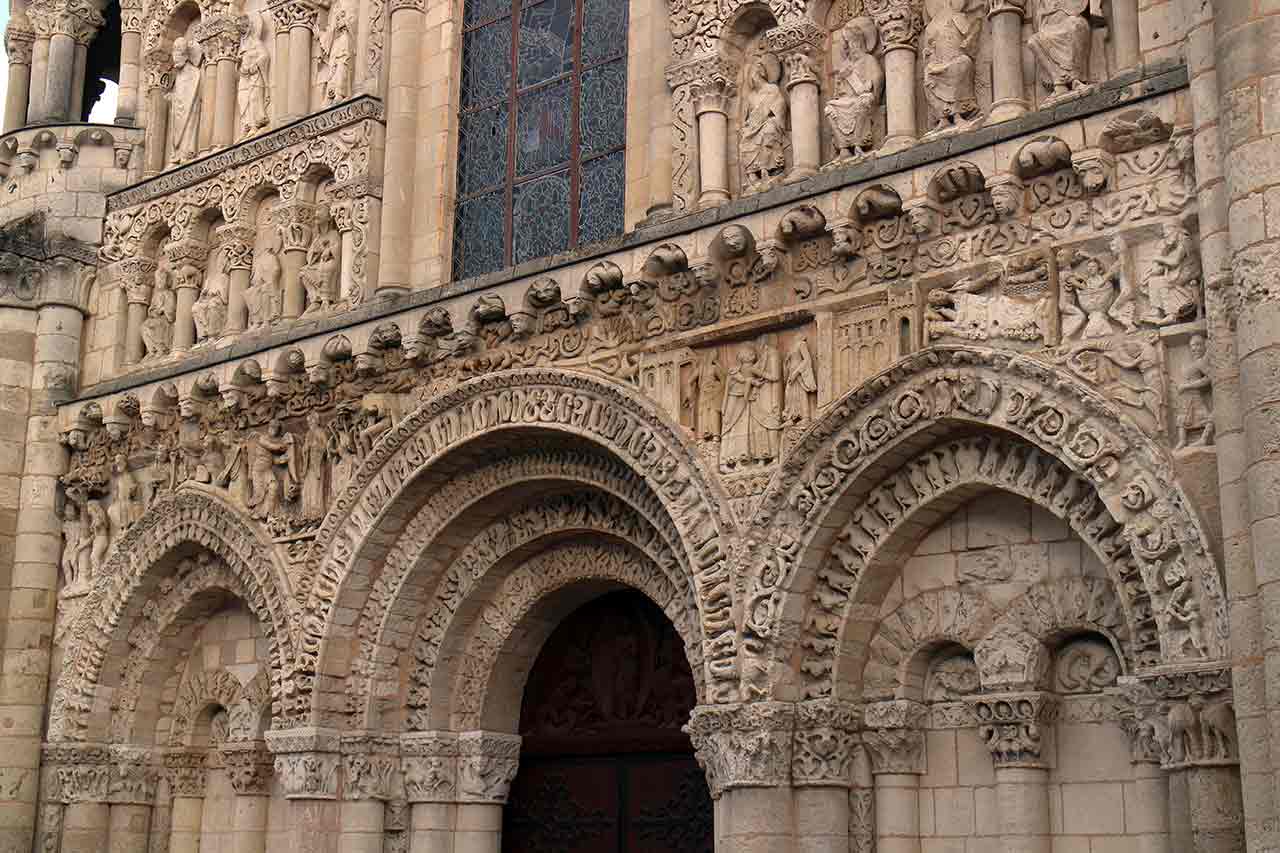 The collegiate church of Notre-Dame de Poitiers had been dedicated to the Virgin Mary at least since the tenth century and around the turn of the eleventh century was being referred to as Sancta Maria Major, an appellation presupposing a connection or identification with the celebrated Santa Maria Maggiore in Rome.

Built in the early fifth century, Santa Maria Maggiore was erected in the immediate aftermath of the Council of Ephesus which had been called to rule over the theological controversy surrounding the Virgin’s nature in the face of the Nestorian heresy. The Council decreed that she was not merely Christotokos, ”Birth giver of Christ” but Theotokos, ”Birth giver of God”.

From the seventh century, Santa Maria Maggiore had held a relic of the Holy Crib and early Popes had celebrated the Christmas liturgy there. This tradition had lapsed but was revived in the eleventh century by Gregory VIIth.