Even the man Gabriel, whom I had seen in the vision at the beginning being caused to fly swiftly

The Romanesque façade of Saint Gabriel de Tarascon presents at first a rather enigmatic prospect. The architectural forms are composed of stylistically disparate elements. The sculptural work seems disconnected with no discernible coherent iconographic theme. Closer inspection however, reveals a subtle narrative of human salvation composed of allegorical, symbolic and typological subjects and in which the role of the Archangelic patron is given particular emphasis.

The three human figures on the tympanum present a narrative which combines two of the Old Testament’s key scenes, Daniel in the Lion’s Den and Adam and Eve in the Garden with the Serpent and the Tree of Knowledge. 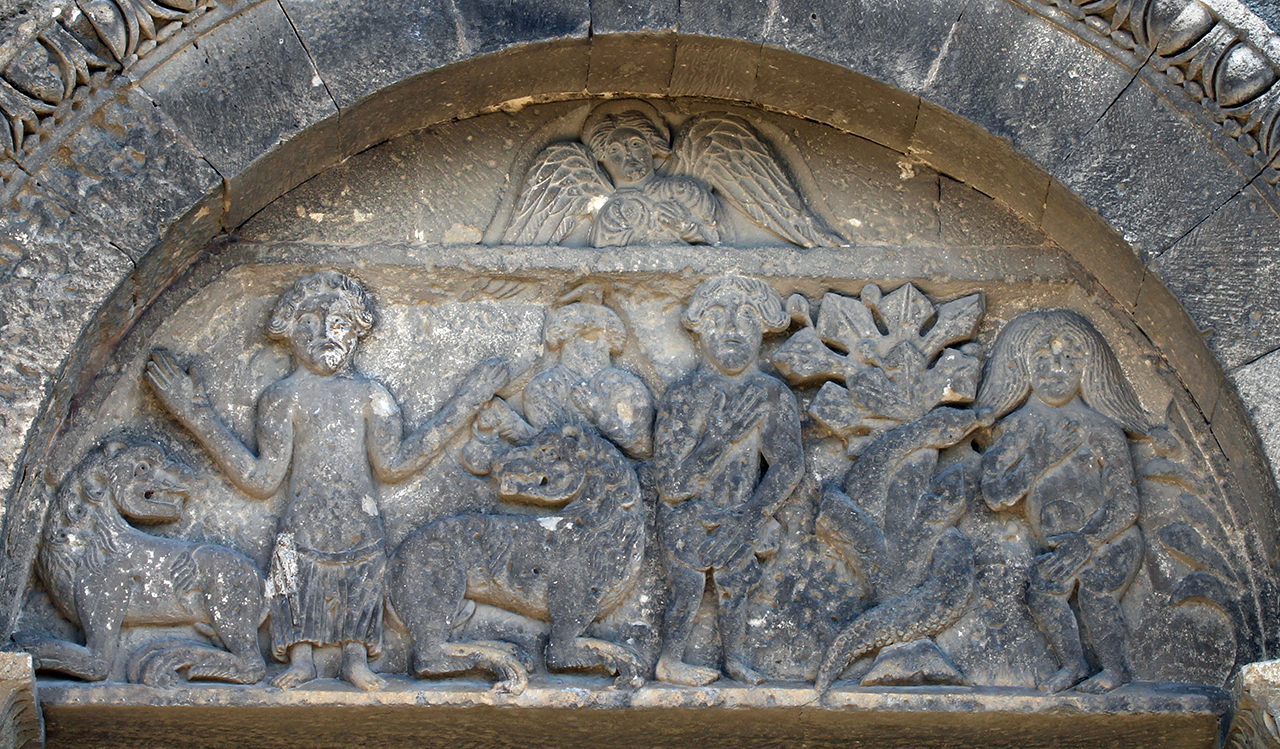 The style and subject matter are reminiscent of early Christian imagery, especially that found on sarcophagi. In the Romanesque period, the image of Daniel in the Lion’s Den was widespread, representing as it did, a typological prefiguration of the Passion and Resurrection of Christ.

Pairing this with the scene of the Fall established a thematic link with the lions representing death, introduced into the world by Original Sin and  Daniel triumphing over them. As a prefiguration of Christ, the figure would therefore represent the triumph over death which began with Original Sin.

The representation of the Daniel is significantly amplified by the inclusion, in the background of the prophet Habakkuk, who was transported from Judaea to Babylon by the Archangel Gabriel to come to Daniel’s aid. Habakkuk was given a basket of food to feed Daniel.

The upper sculptural register, the frieze placed within the triangular fronton is of the Annunciation and the Visitation.

In the Annunciation, Gabriel and the Virgin each occupy separate arcades while to the right Mary and Elizabeth share a single arcade in the depiction of the Visitation.

While representations of Daniel most often referred to prefigurations of the Passion and Resurrection there was secondary aspect to Daniel’s iconography which was also as a prefiguration of the Annunciation. In chapter IX of the Book of Daniel, the prophet is visited by the angel Gabriel who describes a vision of the coming of the Messiah.

This connection is given further substance and the inclusion of Habakkuk in the scene is given added meaning when the exegetical commentary of Honorius of Autun is considered. Honorius made explicit the notion of Gabriel’s appearance to Daniel as a prefiguration of the Annunciation by associating the miracle of Habakkuk’s basket of food passing to Daniel without breaking the seal of the Den with Christ’s passing into the womb of Mary without breaking the seal of her virginity. 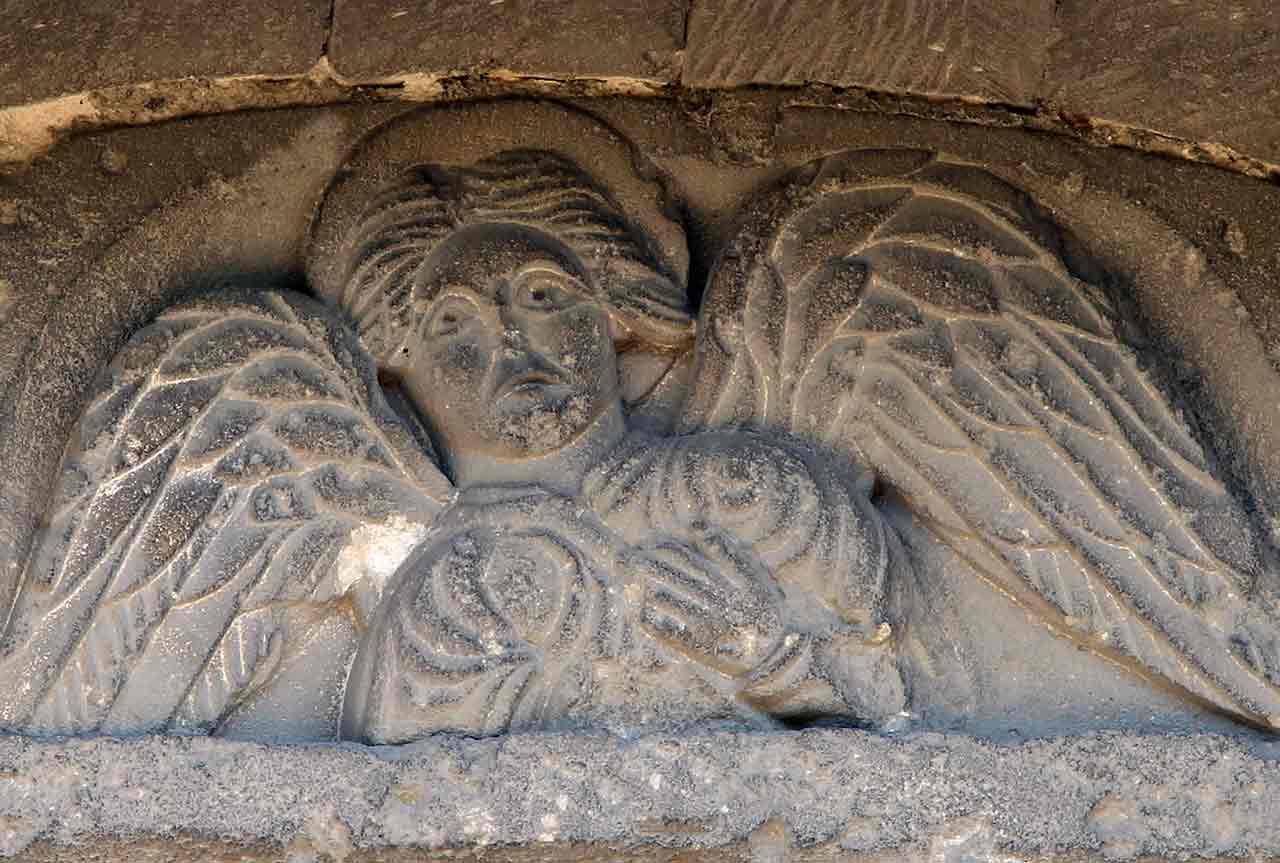 Habakkuk’s basket of food becomes a symbol of the Eucharist and Gabriel’s appearance to Daniel, while not depicted becomes implicit. The typological and allegorical strands are further strengthened in consideration of the relationship between the scene of Adam and Eve and the Annunciation: the Eve of Genesis is superceded by the Virgin of the Annunciation who reopens the Gates of Paradise previously closed by her predecessor.

The whole thematic programme is symbolised by the Lamb at the apex of the fronton presiding over a lion beneath.

This symbolic quality is developed to an abstract level as the programme reaches it apotheosis in the oculus. The symbols of the four evangelists surround the circular form in a quadrangular formation symbolising the terrestrial element and the cardinal points. The Eagle of John is positioned to the East representing the Resurrection while Matthew as an enthroned man angel is to the West and representative of Death and the Incarnation. The Evangelists also connote the spreading of the Word to the World and the fulfilling of the Mission of the Apostles.

The perfect circle of the oculus implies the divine. Within the sculpted area surrounding the oculus are two registers. The outer of acanthus leaves and the inner of ten human heads. In exegetical tradition dating back to Augustine and Isidore of Seville, ten was the number of perfection and infinity. The Apocalypticism of Romanesque church facades becomes explicit, the prophecies of the Book of Zechariah speaking of “Ten men that shall take hold“. Effectively, the oculus at Saint Gabriel takes the place of the Majestas Domini.

The programme of the facade as a whole can be considered as a progression from the Old Testament’s narrative of the Fall and later prophecies of coming redemption to the New Testament’s Incarnation representing the fulfillment of those prophecies. The whole leading to the Second Coming and the Heavenly Jerusalem as symbolised in the oculus.

WATCH THE ROAD TO ARLES