Daniel In The Lion’s Den

Hippolytus of Rome: In Danielem 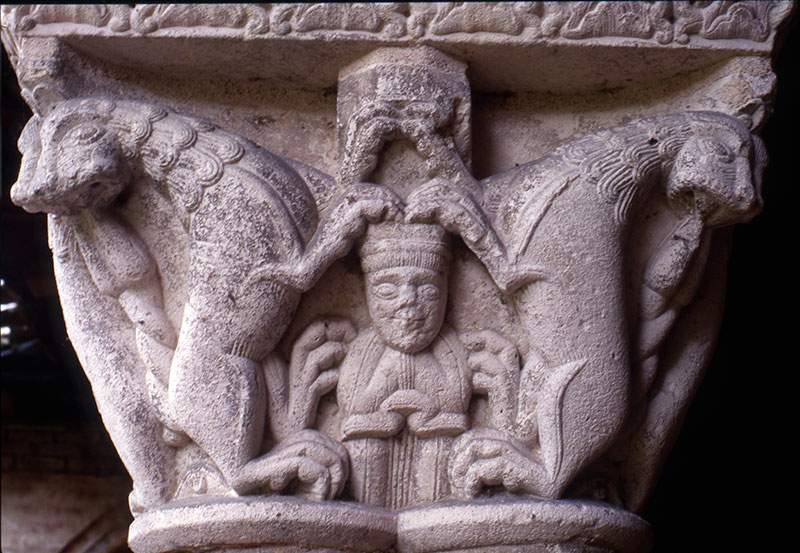 The depiction of Daniel in the Lion’s Den was one of the most iconic in the whole Romanesque canon. Showing a human figure flanked by a pair of lions, it was also one of the most ancient images known to man, emerging out of Sumeria in the third millennium BC.

This simple condensed image acquired many layers of meaning arising from the exegetical writings of Late Antiquity and the simple narrative was amplified into an almost complete resumé of the Christian teleological plan.

The story of Daniel in the Lion’s Den is taken from Chapter six of the Book of Daniel. The eponymous prophet, favourite of the Persian and Medean king Darius, had been placed in a sealed cave with lions as punishment for maintaining his faith in the Jewish God. Miraculously, he emerges after a night unharmed by the wild beasts.

The Daniel legend found its way into early funerary prayers. Depictions were a feature of the first Christian art of the Roman catacombs and were widely used on sarcophagi of Late Antiquity.

The Early Iconography of Daniel In The Lion’s Den

The portrayal of a human figure between two affronted beasts was not limited to the Daniel theme.

Early examples of this iconic image can be found in bronze work of ancient Persia from the seventh century BC where they depict the epic hero of the Gilgamesh story.

In Late Antiquity, images of Saint Menas of Egypt, whose shrine was a major pilgrimage destinations, showed him standing in an orant pose between two cowed beasts.

Bronze belt buckles found in sixth and seventh century Burgundian burial sites, reveal the same image used for talismanic purposes. These may have originated in La Tène Celtic culture. Some bore Latin inscriptions which referred to the Daniel legend in a conflation of Pagan and Christian traditions.

Both these Burgundian Merovingian bronze ceremonial buckles and the ancient Persian artefacts bear striking similarities to the numerous Romanesque depictions of Daniel in the Lion’s Den, their human figures with outstretched arms and cowed beasts on each side. 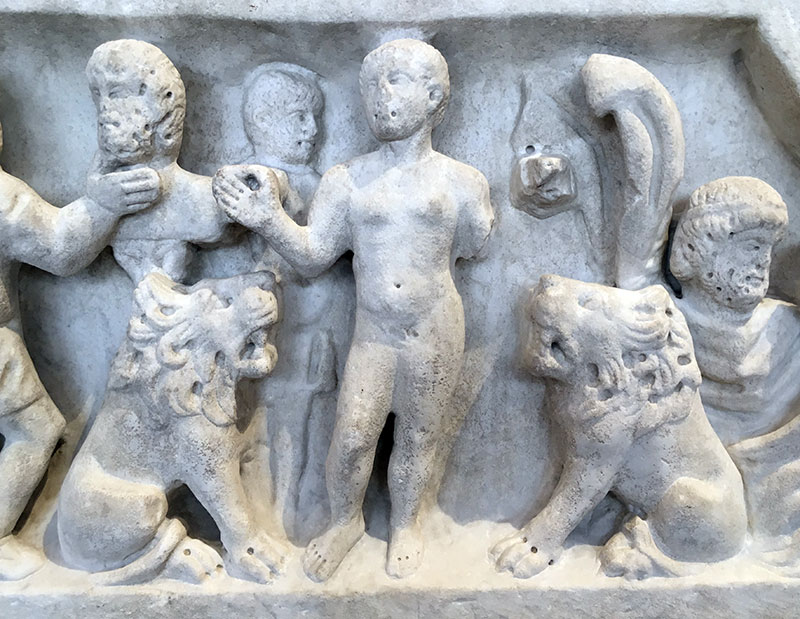 The Cultural Diffusion Of An Archetypal Image 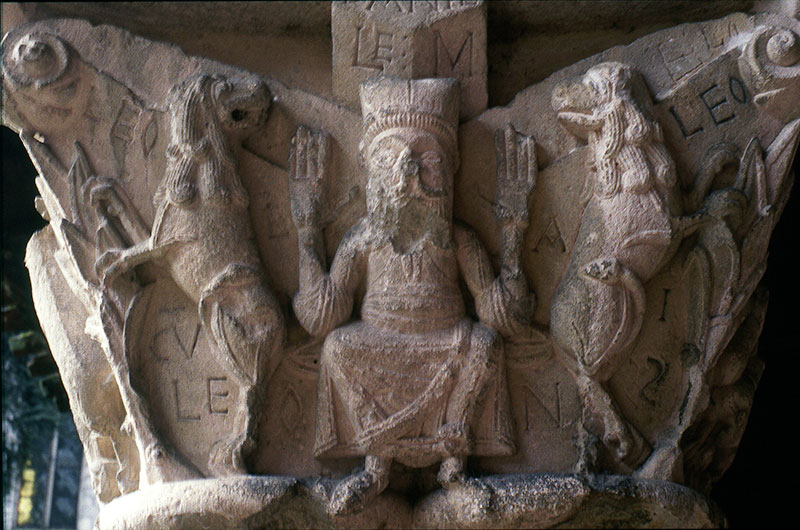 A common source appears inevitable. It is thought that the Persian Gilgamesh figure was conveyed through Scythian culture of southern Russia to the Germanic peoples of Northern Europe, where a predisposition for a similar image of a guardian figure existed already.

Similarly, the Mediterranean was another conduit for the expansion of such cross cultural icons given protective, tutelary powers through a figure who appears to struggle with and dominate forces symbolising death and evil.

Hippolytus of Rome was the author of the first commentary on Daniel just after the turn of the third century. Drawing on the notion of Daniel, who by his faith in God evaded death at the hands of the lions, Hippolytus found parallels with the Resurrection. Daniel, he equated with Adam as a precursor of Christ and the lions represented Death overcome.

Daniel As A Prefiguration Of Christ

The Book of Daniel continued to be the subject of numerous commentaries from authors including Jerome and Ambrose of Milan and throughout the middle ages in texts by the Benedictine monks Raban Maur and Honorius of Autun.

This broad range of allegorical readings of the narrative can be found represented in the rich variety of the depictions to be found in Romanesque sculpture.

The Den was an image of Hell, wrote Didymus the Blind in his fourth century Commentary on Zechariah: “Ask yourself if the Den without water is not the Hell of the impious and sinners”.

With the lions symbolising Death, a common reading was to equate Daniel’s survival with Christ’s triumph over Death.

Thus the image read as a descent into Hell and a resurrection and therefore a prefiguration of Christ’s Passion and Resurrection.

Hippolytus was alluding to this when he compared the way in which a stone was used to seal the Den in which Daniel was imprisoned with the guard set up by the Pharisees to seal Christ’s tomb. 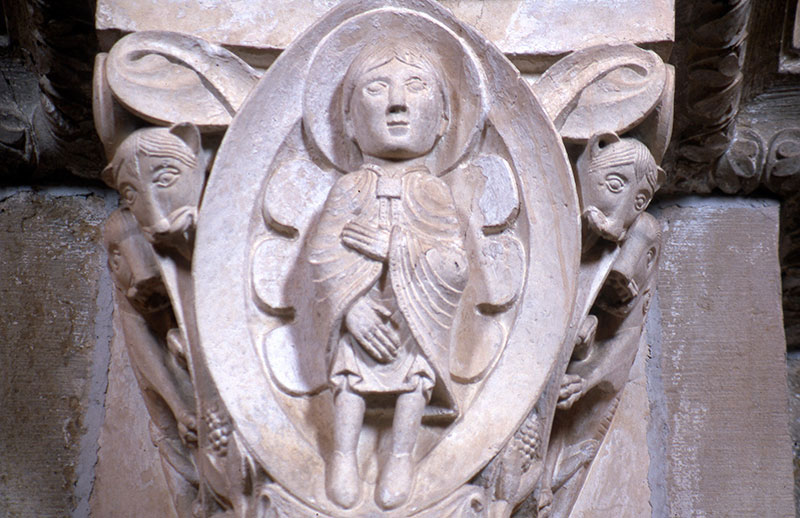 Daniel As The Lord Of Beasts And The New Adam

An early fourth century Christian Syriac commentator called Aprahat the Persian made the analogy clear when he wrote: “Daniel they threw him into the Lion’s Den but he was protected and rose up untouched. Jesus, they made him descend into the pit of the Realm of the Dead but he rose up and Death had no power over him”.

The analogy with Christ explained the pose adopted in the most common form of the iconography, which was with outstretched arms, originally the orant prayer gesture, but seen also as a representation of the Crucifixion.

Ultimately the image of Daniel in the Lion’s Den was seen as a symbolic representation of Paradise. Daniel was guarded by the lions. Aprahat wrote that the lions extended their paws to cushion Daniel’s fall into the Den. Ambrose and Paulinus of Nola echoed this notion. According to Hippolytus, the lions had licked the prophet’s feet.

It was a restoration of a prelapsarian order. The lions actively feared Daniel as God had told Noah that the beasts of the earth would fear him after  the Great Flood.

The person of Daniel was also taken to represent the Christian believer whose own death and resurrection were implicit in the Daniel legend.

Hippolytus called on the faithful to “Imitate Daniel. There will be found in you no injury and you shall be raised living from the Den and you will participate in the Resurrection.

The fate of Daniel was the fate of all believers.

Tina Negus. Daniel in the Den of Lions: early medieval carvings and their origins. Journal of Ethnological Studies. Vol.44, 2005-6, pp 63-77.