Dig in the ground and look for my body, for I am Ursinus

It was not uncommon for the reliefs on the facades of Romanesque churches to reference the efficacy of the saintly relics within. The most striking example may be that of Sainte Foy at Conques. The same is true of the church dedicated to Saint Ursinus patron of the city of Bourges, albeit in a much more oblique manner.

The subject of the church’s tympanum is probably the most baffling in the Romanesque canon. Its mystery is compounded by the fact that the collegiate church which it adorned was destroyed during the French Revolution and the surviving sculptural relief is now shorn of any context which might have given an insight into its intention. 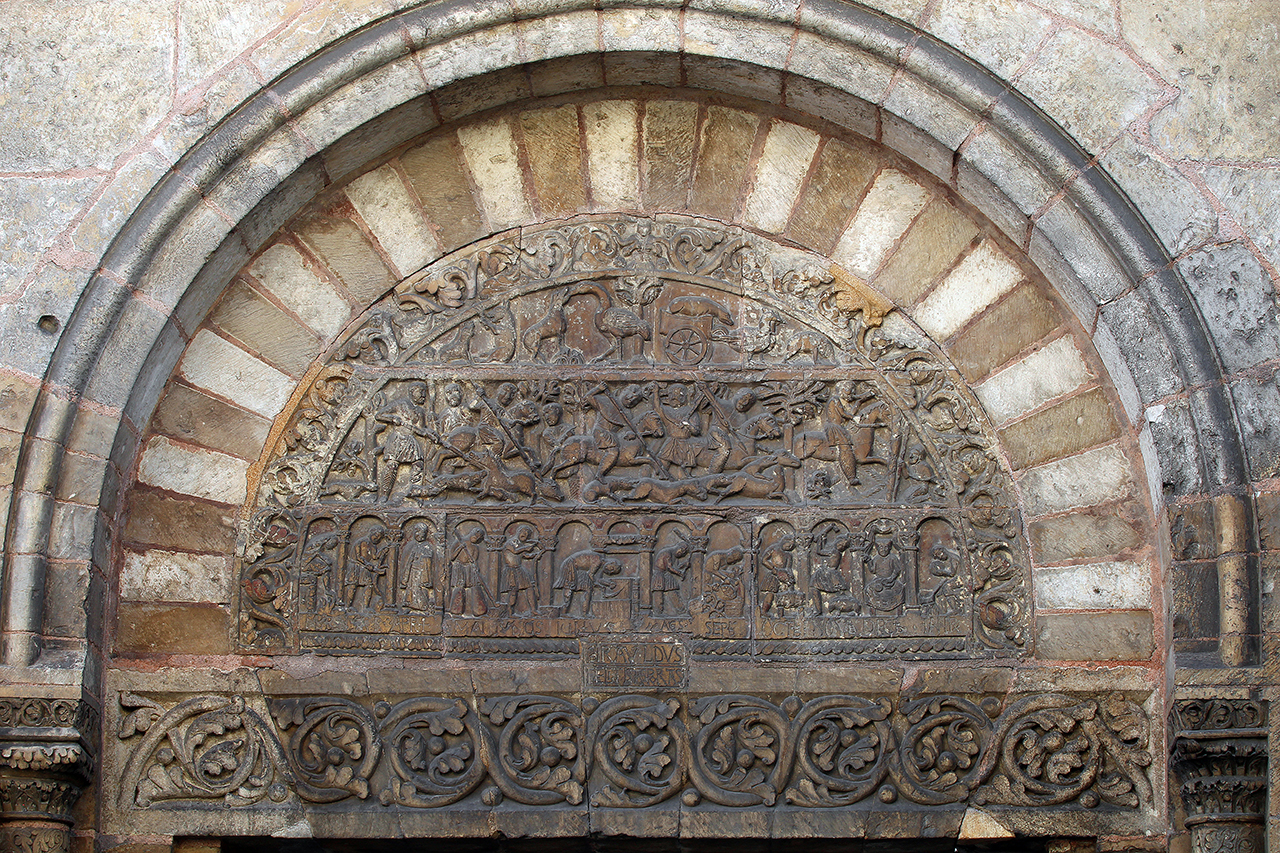 The Hunting Sarcophagus of Saint Ursinus 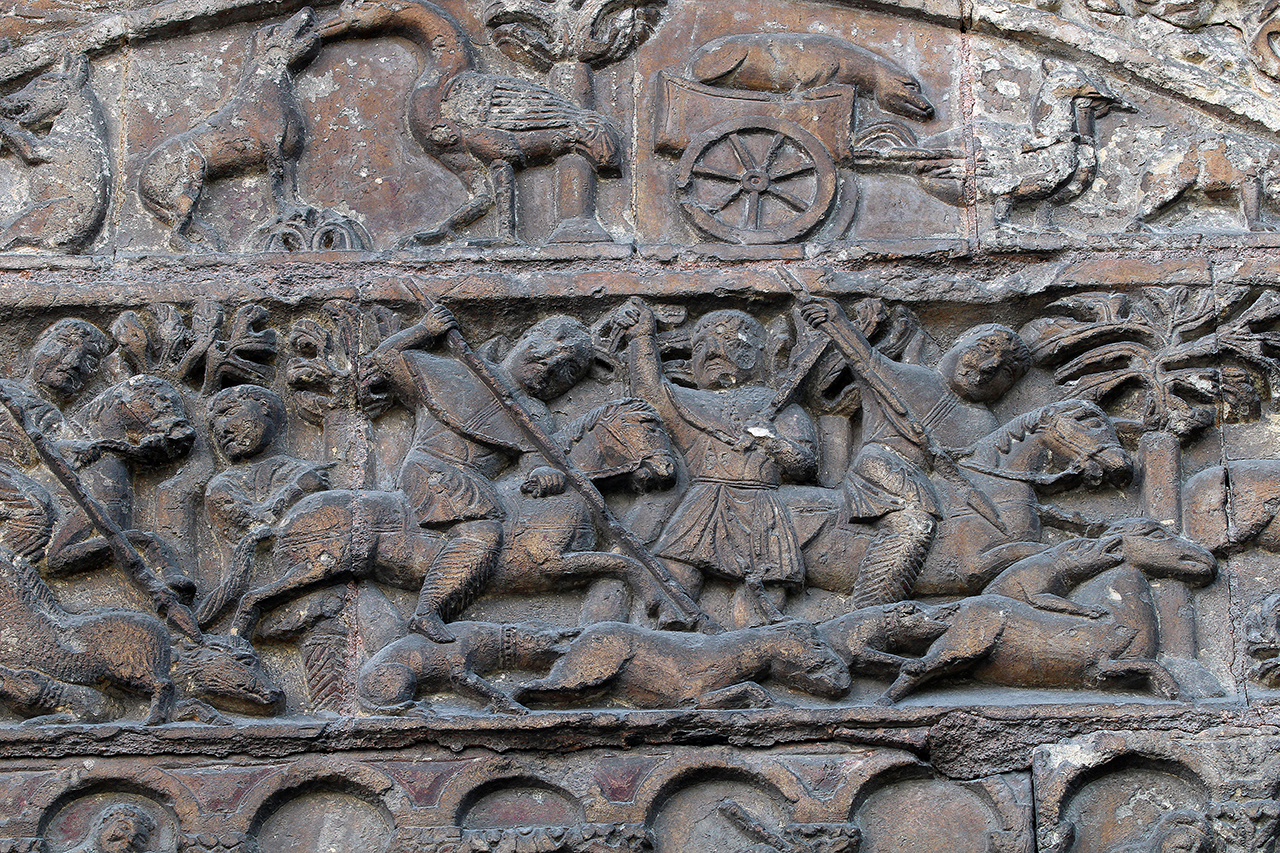 The tympanum’s central register is of a hunt scene and is a twelfth century replica of a fourth century Gallo-Roman sarcophagus. This is sandwiched between an upper register of images from well known classical and medieval fables and below a frieze which illustrates the Labours of the Months.

At the apex of the tympanum a diminutive figure draws aside a curtain of scrolling vines, which encircles the three friezes below.

The replica sarcophagus depicts a hunting scene reminiscent of similar reliefs from Late Antiquity, an example of which can be seen at the nearby abbey of Déols on the tomb of Saint Lusorius, one of Ursinus’ disciples.

At Bourges, mounted hunters and footmen armed with spears and dogs, attack a pair of wild boar and pursue a stag towards capture by a waiting net. In Late Antiquity, hunt scenes similar to the one from Saint Ursinus were intended to evoke the trials of the Christian soul on its earthly journey.

However, another interpretation of the tympanum of Saint Ursinus comes to mind as we are reminded of a legend recounted by Gregory of Tours.

The legend recounts the discovery in the sixth century of the long lost tomb of Saint Ursinus, Apostolic evangeliser of the city of Bourges. Ursinus, it was said had been a disciple of Saint Stephen later sent to Gaul by Saint Peter.

After his death Ursinus was buried in a sarcophagus in a common cemetery and a dense covering of vines quickly obscured its location. “A vineyard was planted on top and buried all memory of the first bishop of the city”, wrote Gregory of Tours in the Glory of the Confessors, his anthology of saintly lives.

Two centuries later Ursinus appeared in a vision to Augustus, abbot of the local abbey of Saint Symphorianus, urging him to locate and recover his tomb. Initial scepticism was overcome when Ursinus reappeared simultaneously to Augustus and to Saint Germanus, bishop of Paris, then visiting the city. 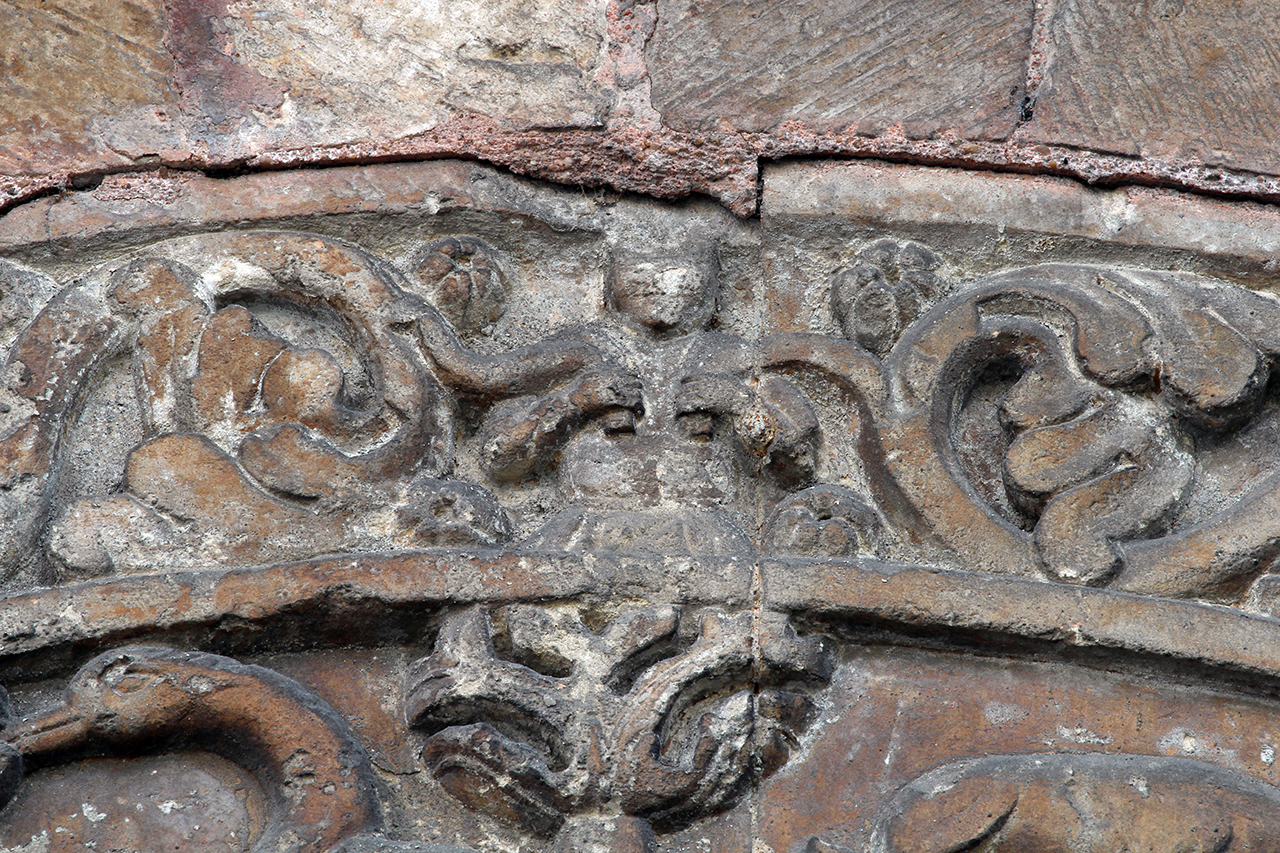 The Sarcophagus and the Tomb 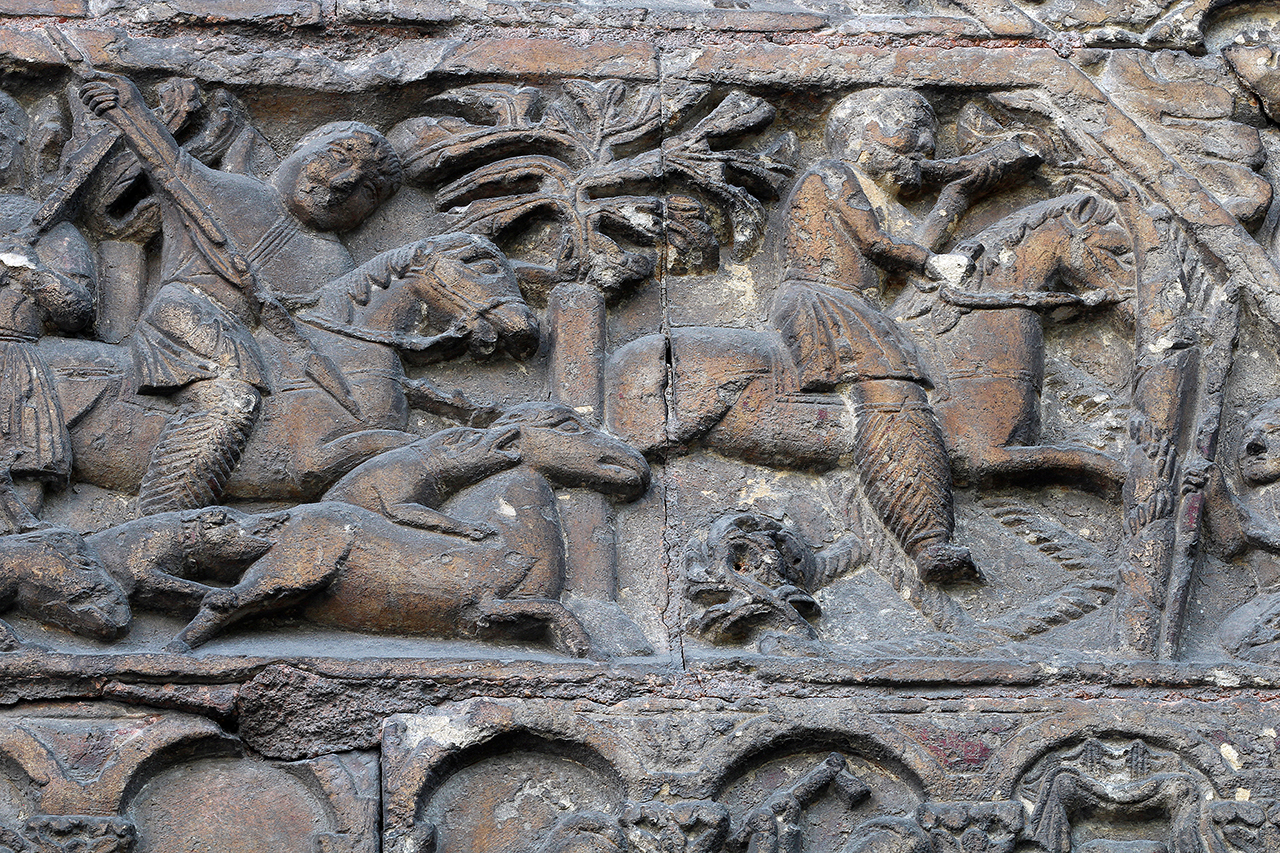 In the vision, Ursinus described the burial site as “beneath the roots of these vines”. The tomb was found and inside Ursinus’ body was discovered, untouched “by any decay”.

When the sarcophagus was lifted out of the ground it was carried in ceremony to the abbey where it was initially too heavy to be transported across the threshold until it became miraculously lightened enabling its passage into the church. It was placed beneath the main altar and the abbey of Saint Symphorian was subsequently renamed after the patron of Bourges. According to Gregory, “After the celebration of Mass, Ursinus was buried next to the altar, while the people rejoiced. Thereafter he revealed himself in many miracles”.

The central frieze of the Bourges tympanum faithfully replicates a fourth century Gallo-Roman sarcophagus of the type fabricated at Arles, many of which featured similar hunting scenes and plausibly one which might have entombed Ursinus.

The tiny figure at the top of the tympanum, drawing aside the vine, would be the saint himself, facilitating the miraculous inventio of his relics.

The hunt scene of the tympanum of Saint Ursinus contains an anachronism. The lead horseman is sounding a hunting horn and using riding stirrups, both medieval developments.

The authors of the frieze may well have introduced these additions in order to draw a connection between the fourth century and the contemporary world. Because the inventio of the tomb of Ursinus was the saint’s first recorded miracle, its depiction on the outside of the church which housed his shrine would have served both to authenticate the relics and at the same time, emphasise their miracle working properties.

Nor is it unlikely to be a coincidence that an actual Gallo-Roman sarcophagus, housing the relics of Ursinus’ own disciple was to be found in the crypt of a nearby abbey. That sarcophagus featured a hunt of lions, bears and wild boar. 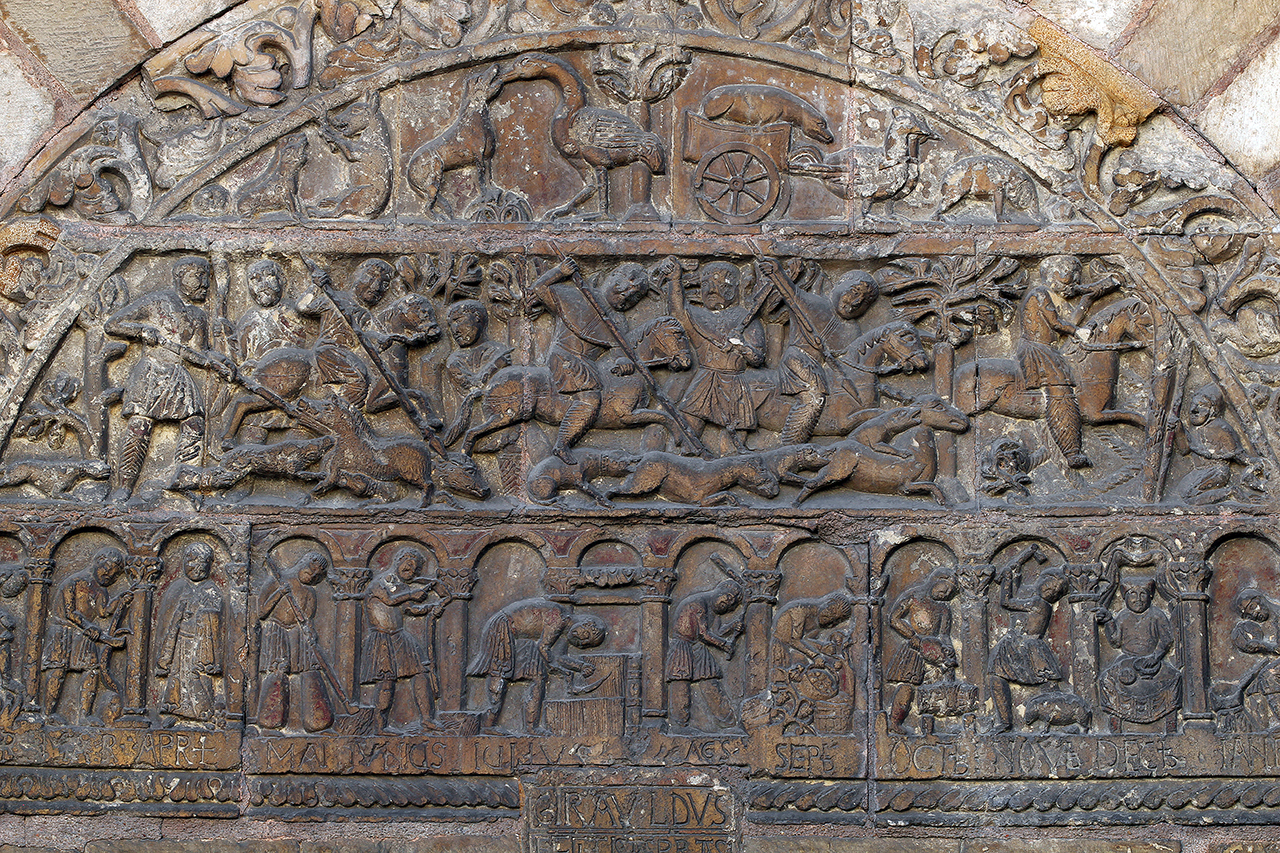 Glory of the confessors,  Gregory of Tours ; translated with an introduction by Raymond Van Dam. Liverpool : Liverpool University Press, 1988.