The Romanesque Tympanum of Conques

The Book of Miracles of Sainte Foy Bernard of Angers 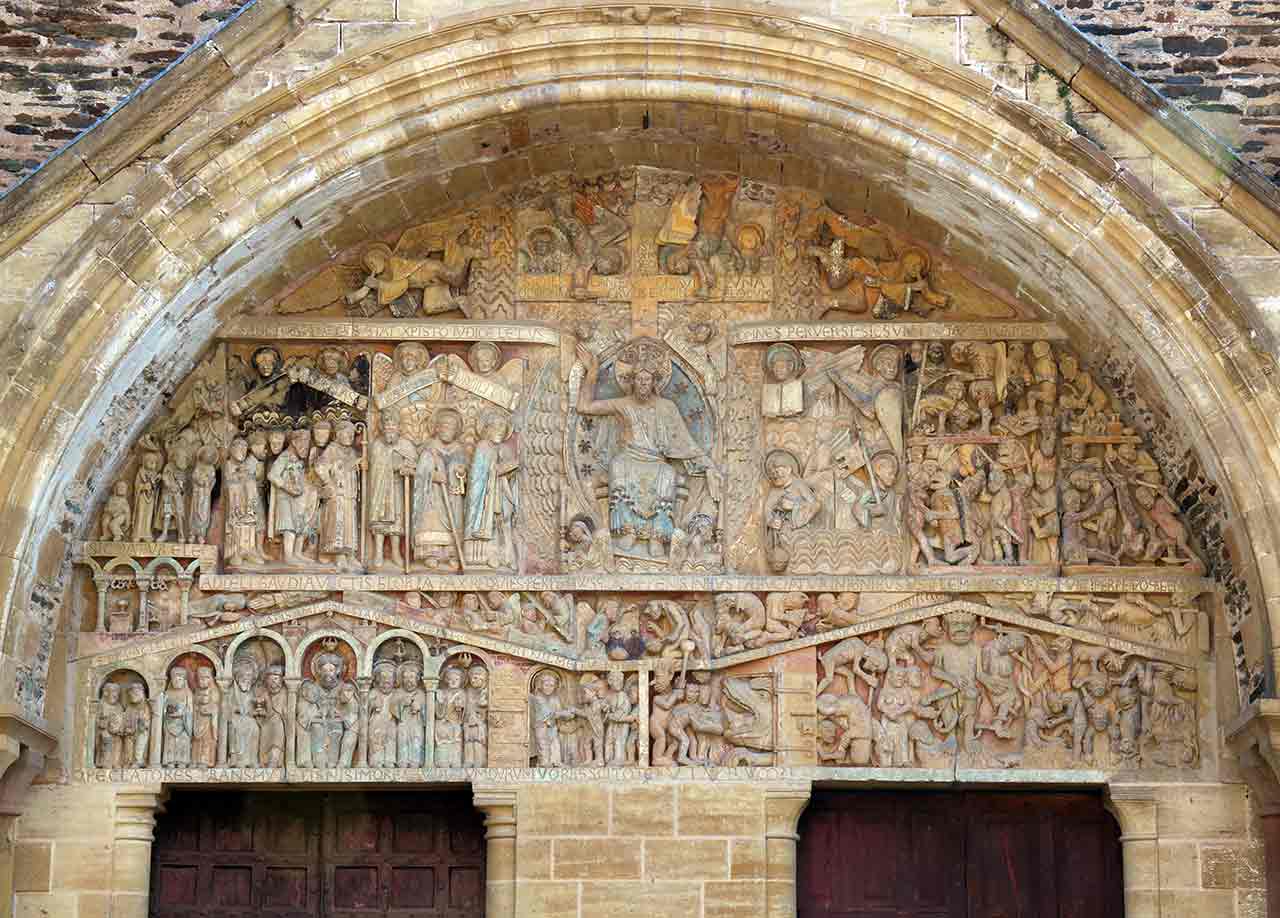 The Romanesque tympanum of Conques is arguably the greatest achievement of its type. It was created in the first half of the twelfth century and its size and quality at this extremely remote site is testament, both to the power of the cult of saint’s relics and the importance of the pilgrimage to Compostela.

Conques had been an impoverished monastery until it acquired the relics of its patron, the virgin martyr Sainte Foy, and with the development of her cult for miracle working, the abbey had grown to become a spiritual centre of the first order. Its status was further enhanced with the rise in popularity of the pilgrimage to Santiago in the late eleventh century and the consequent role as the prime station of the Puy route that Conques came to exercise.

Sculpture of this magnitude and scale was clearly reserved for sites held in exceptional regard and Conques had evidently become one of these when the work was commissioned some time in the 1120’s.

The theme of the sculptural programme is complex, dealing with the matter of Christian salvation, past, present and future and the mechanics of intercession. One of its remarkable features is that it includes Sainte Foy and Conques itself in the eschatological scheme. The central image is of Christ in Majesty returning at the End of Time. Below the dead awaken from their sarcophagi. 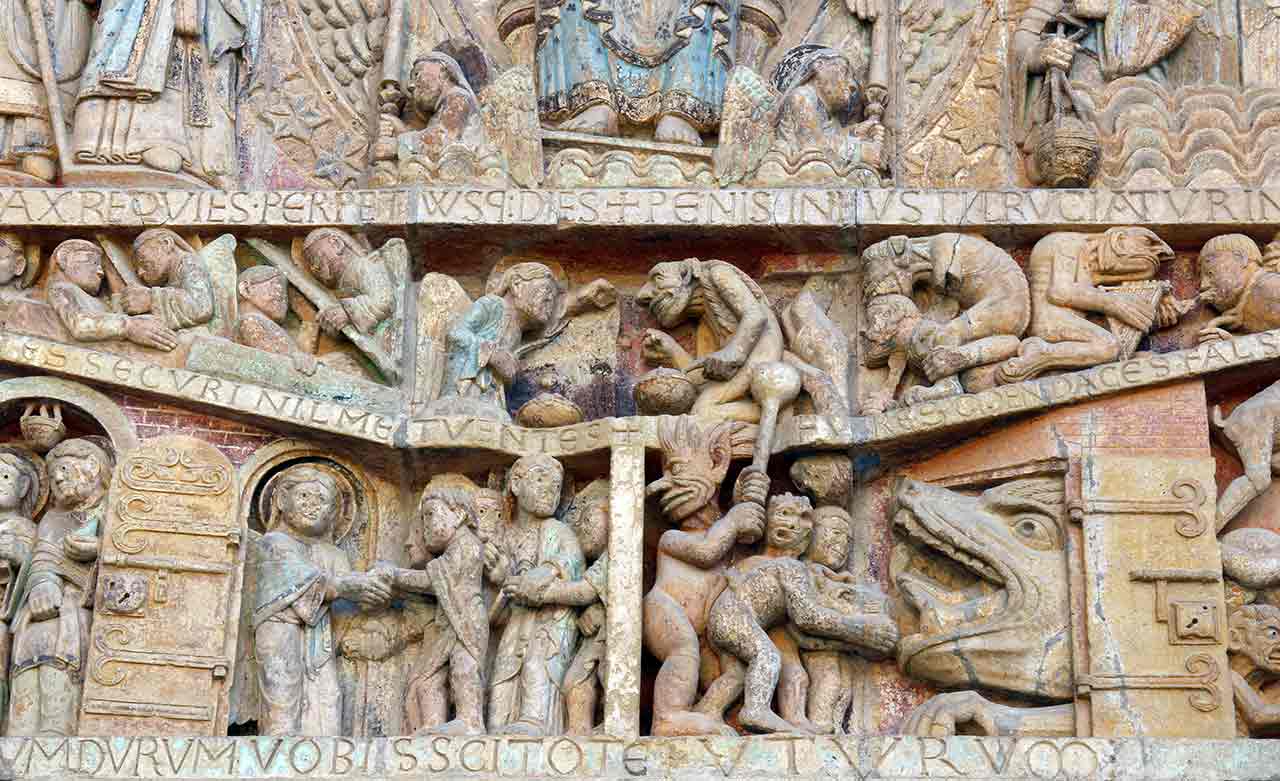 On the right side of the viewer is Hell and a form of purgatory, Tartarus. On the other side is the Bosom of Abraham with the Elect in Limbo awaiting their admission to Paradise and above the Procession of the Saints, already in the Celestial Realm.

This would seem to be an image of the future were it not for the other elements of the tympanum which imply a process of redemption which is taking place in the here and now, at Conques itself.

​Directly below Christ is the Weighing of Souls. The Archangel Michael and a demon are at opposing sides of the scales of Divine Justice, a concept drawn from Egyptian mythology.

Below, an everyman figure is drawn away from the waiting Leviathan by an angel and directed towards the doorway to the Elect.

Above is a prostrate young girl. She is in an attitude of prayer before the giant Hand of God. This design is emphasising her proximity to God and hence  important status in the celestial hierarchy. 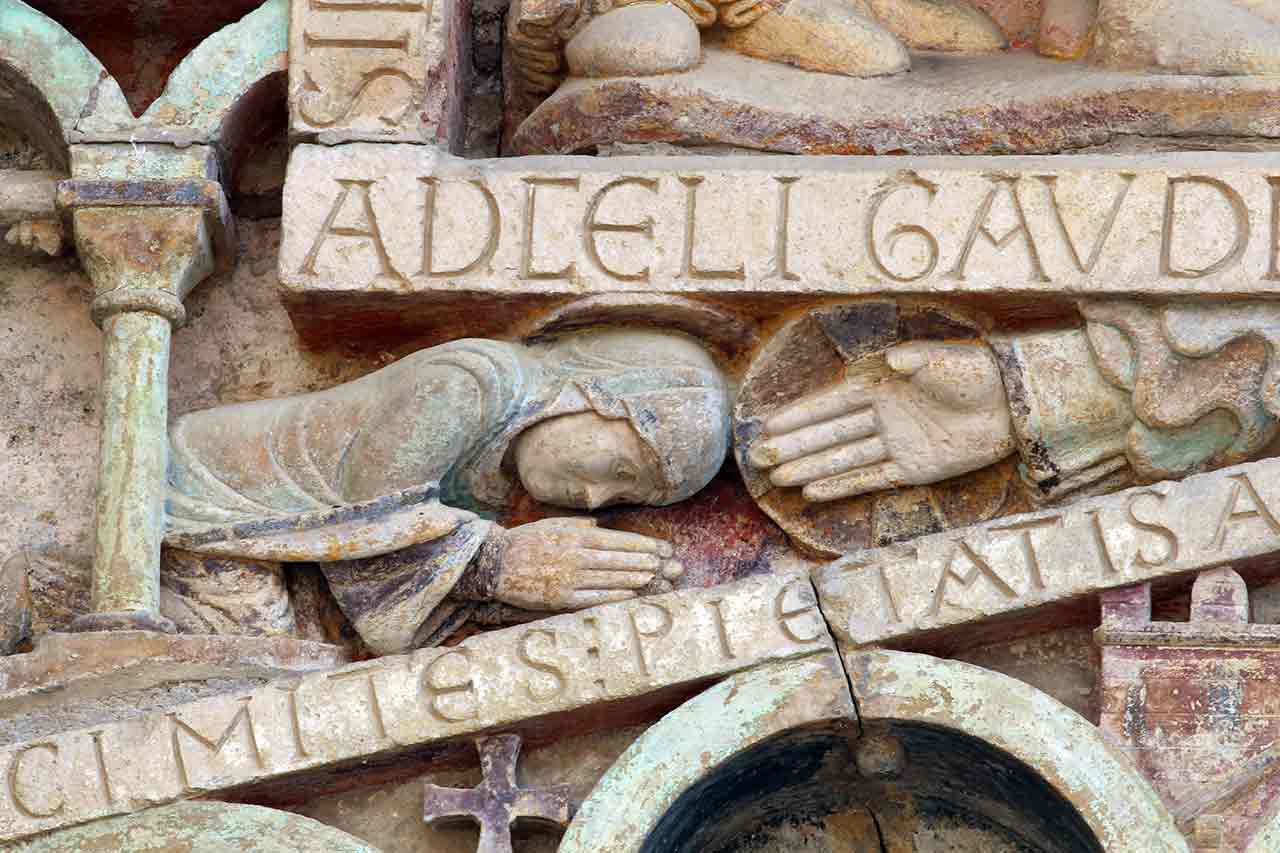 Behind this praying figure is a sculpted image of the church of Conques itself, which leaves no doubt that this  figure is Sainte Foy.

An empty throne stands by the pillars of a church from whose arches hang manacles donated as ex-votos by grateful pilgrims. On the right an altar with eucharistic chalice.

This is the church of Conques. Such manacles had actually been attached to the arches of the church before being melted down and wrought as a screen to guard the reliquary of the saint. The golden statue of Sainte Foy was seated on a golden throne, which here she has risen from to prostrate herself in intercessory prayer on behalf of the man directly below, whose fate is being decided in that very moment.

There is no more graphic depiction of the medieval doctrine of the intercession of the saints. Clearly, great claims are being made here for the role of Sainte Foy’s powers of intercessory prayer and for Conques as a place of pilgrimage. It is presented as a High Place of Christendom and its saint has the power to redeem man.

The northern cleric, Bernard of Angers who had visited Conques in the early eleventh century had declared that Sainte Foy had the power to “lead souls out of the underworld” after witnessing the saint’s miraculous gifts at first hand. The medieval church held that the souls of men could be rescued from the underworld by the power of prayer and the Conques tympanum seems to contain a dual conception of Redemption, both as a future event occurring at the End of Time and an ongoing process which is happening in the present also.