The Camino Francés: León to Compostela 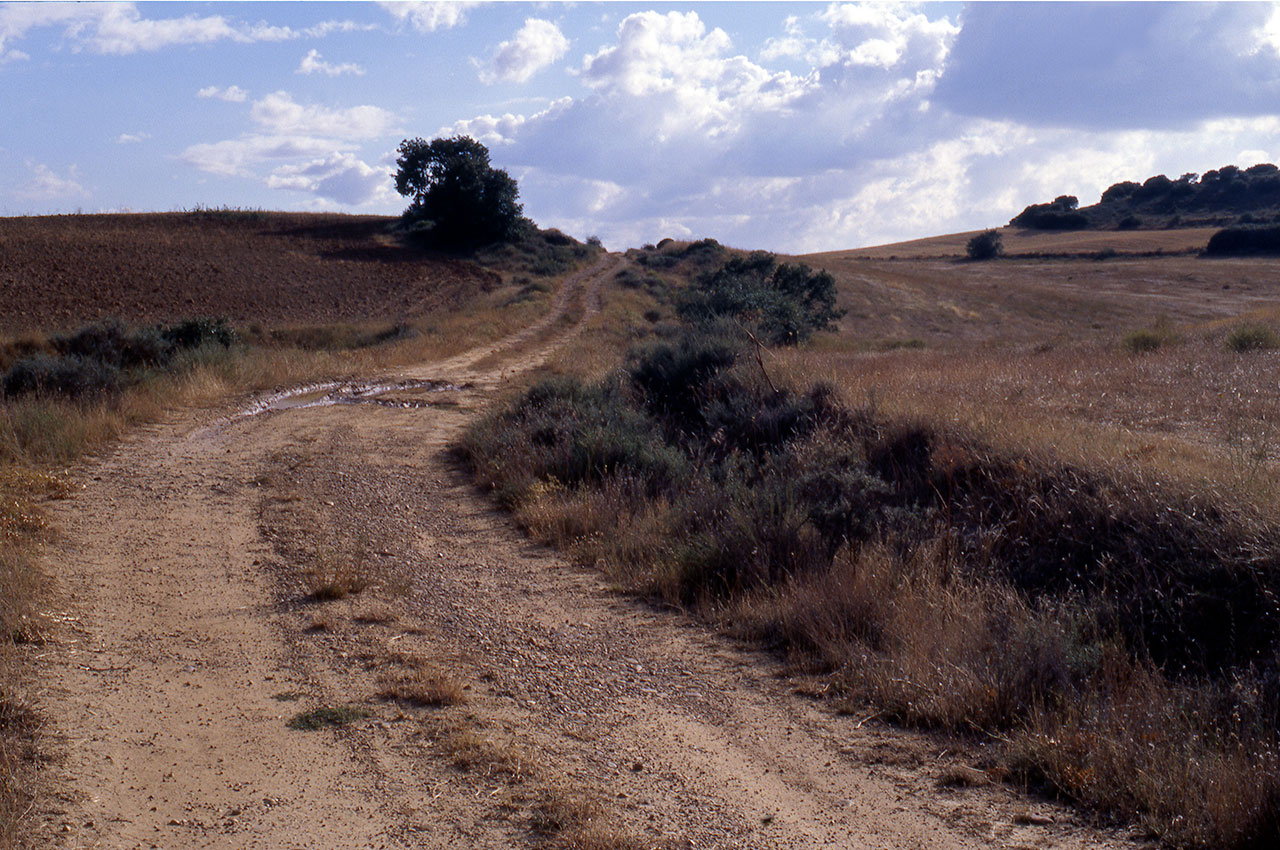 The Pilgrim’s Guide, the medieval Latin text which charted the course of the Camino de Santiago informs us that before entering León the road passed over the Río Porma via a bridge.

As the station marking the eighth day’s journey, the royal city of León, (Legio) on the banks of the Bernesga river was a major station on the Camino and is mentioned in the Guide as “A royal and courtly city, filled with riches”. Surrounded by substantial walls, pilgrims entered via the Puerta Cauriense, the original Roman entrance to what had been the camp of the Seventh Roman Legion.

It was home to the relics of Saint Isidore, perhaps the second most important shrine in Spain at the time and which pilgrims were encouraged to venerate by the Guide. These were held at the palatine basilica of San Isidoro, where King Ferdinand Ist was buried along with other royalty in a pantheon, located at the western end of the church. 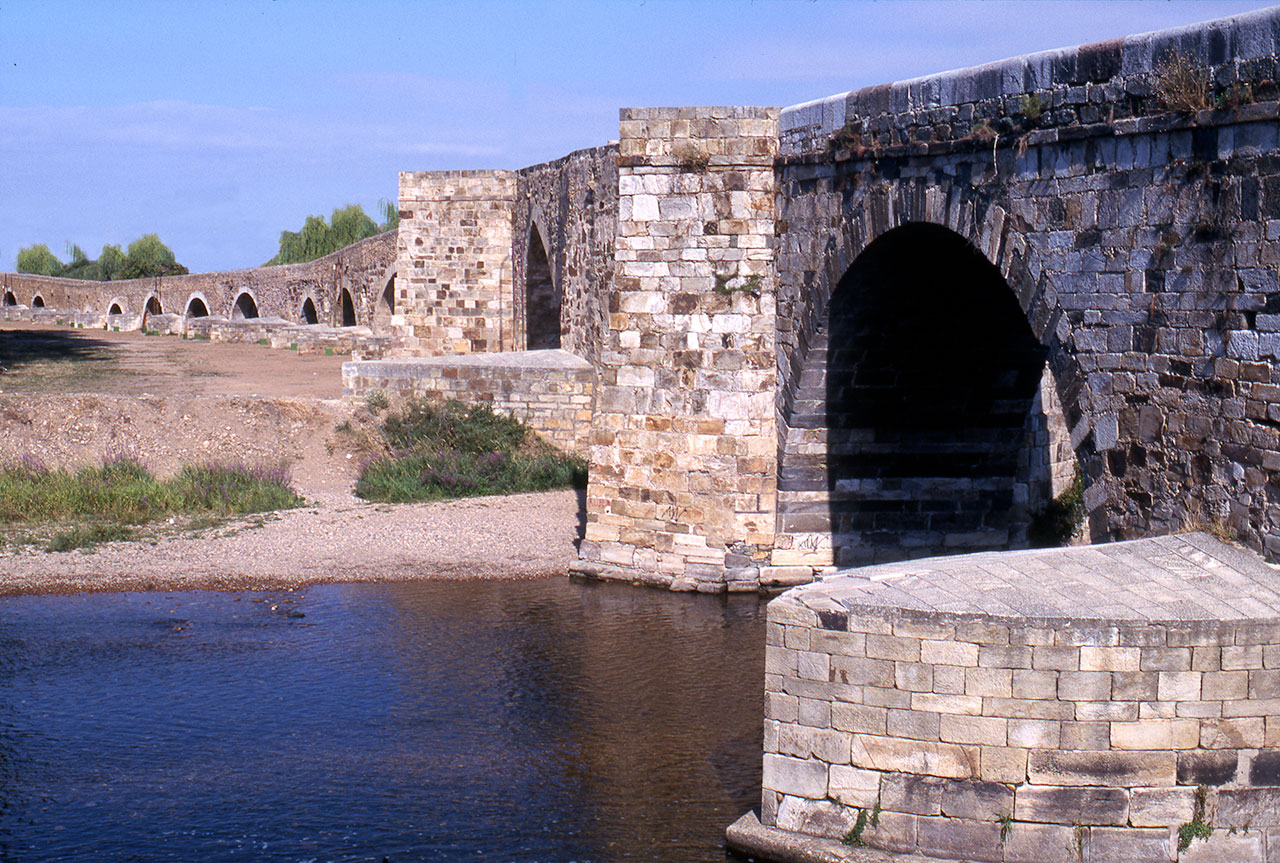 Pilgrims could enter through the Puerta del Perdón, the southern transept entrance. The other entrance was the Puerta del Corderó which featured a dramatic tympanum of the Sacrifice of Isaac.

As an important stopover there were numerous establishments welcoming pilgrims at León. Directly opposite the cathedral’s southern side was a hospital of Saint John founded by bishop Pelayo in 1094.

Beyond León, the Camino de Santiago continued southwest across the vast empty plain with the Cantabrian mountains visible on the horizon to the north.

A monastic hospital dedicated to Saint Michael was located along the route before it reached the Río Orbigo, (Orbega) and the bridge that spanned the river there.

The ancient cathedral city of Astorga, (Osturga) lay almost twenty kilometres further on. Astorga was a major road junction of ancient highways where Camino Francés joined the Vía de la Plata from Mérida. Pilgrims penetrated the city walls through the Puerta Sol, which stood next to the hospital of San Esteban, one of several such establishments in the town. 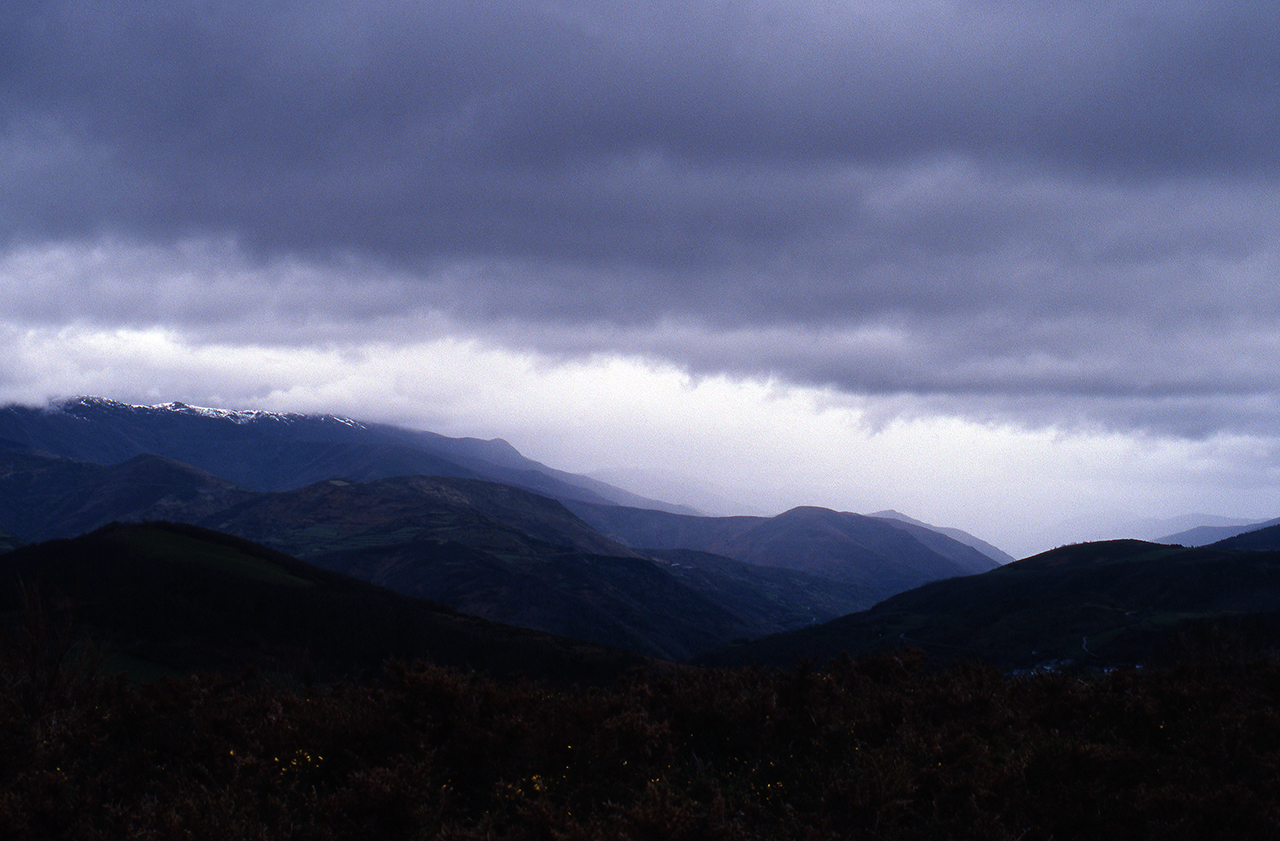 Astorga was the last of the major towns of the plains before the Camino would make its ascent towards the Mountains of León using the Roman road via Rabanal, (Raphanellus) where the Knights Templar were installed and then upwards to the pass at Monte Irago, (Portus Montis Yraci) which stood at 1500 metre and where pilgrims could find shelter at a hospice.

Rabanal, according to the Guide was the station, which marked the end of the ninth days journey of the Camino. A hospital at the pass of Monte Irago cared for those who had struggled up the steep climb. Now the Camino de Santiago descended towards the more gentle pastures of the Bierzo, past Molinaseca, (Siccamolina) to Ponferrada.

At Molinaseca there were two hospices, one on the outskirts for lepers where pilgrims crossed the Meruelo River over a bridge.

Ponferrada, (Pons Ferratus) was historically the centre of an iron ore-mining region and stood at the confluence of the rivers Sil and Boenza. The River Sil was crossed using the bridge with iron railings from which the town took its name. The Sil is one of those rivers mentioned in the Guide as being safe to drink from. The Knights Templar were installed in the town and left an important castle. From Ponferrada the road headed north west towards Cacabelos, (Carcavellus) and Villafranca del Bierzo, (Villanfrance de Bucca Vallis Carceris). Villafranca was so named because of the encouragement given by Alfonso VI to Frankish pilgrims to settle there. 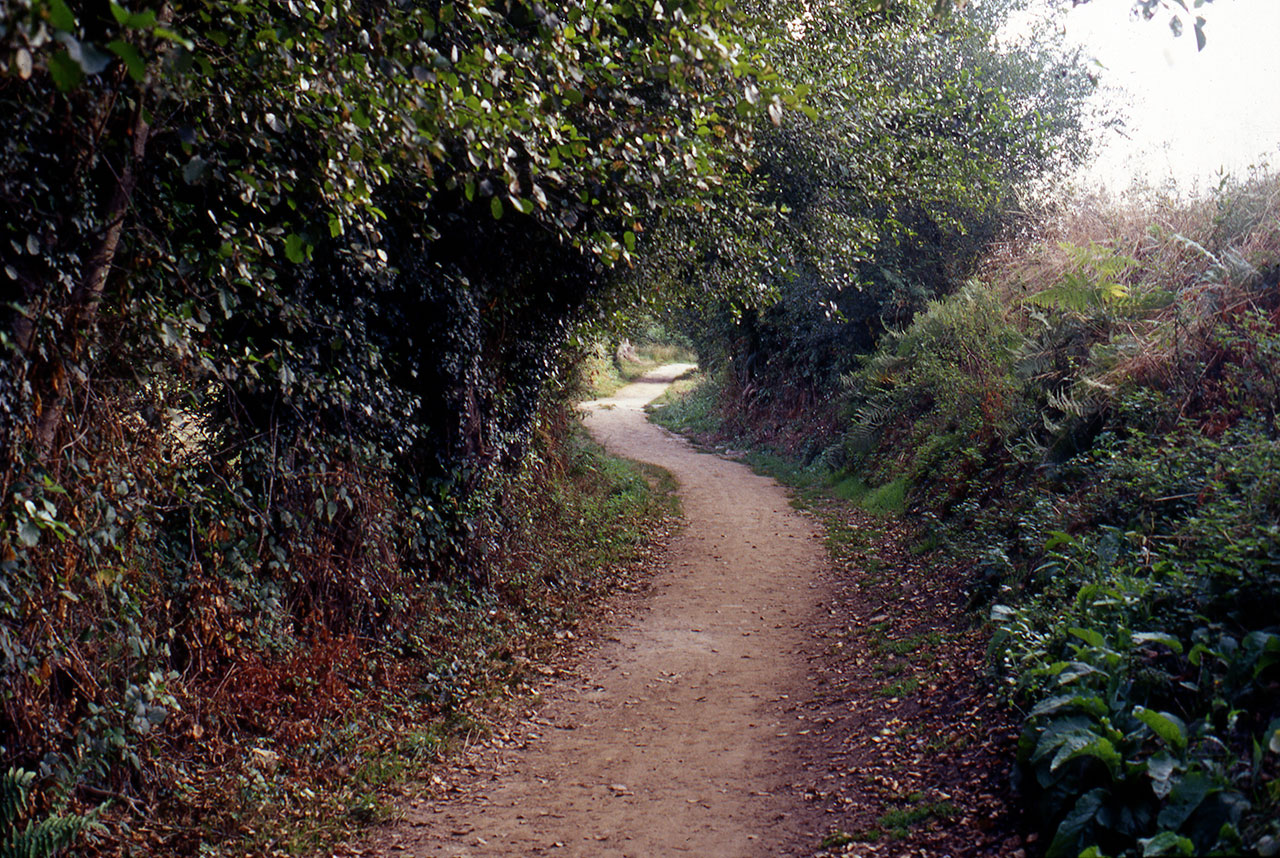 The waters of the river Cúa at Cacabelos were recommended by the Guide as were those of the Burbia at Villafranca del Bierzo. Cacabelos had been rebuilt by one of the major benefactors of the pilgrimage road, Bishop Gelmírez of Compostela because of its strategic position by the bridge which crossed over the broad river.

Villafranca marked the end of the tenth day’s journey of the Camino Francés, where pilgrims were received at the Cluniac monastery dedicated to Santa María de Cluny. Villafranca’s church of Santiago had a porch, the Puerta del Perdón, where pilgrims too lame or sick to continue the journey could receive the same spiritual benefits they would have received at Compostela.

The road led through the narrow valley of Valcarce, where another river was similarly recommended to pilgrims as being sweet and drinkable.

The Camino Francés was now rising steeply as it entered one of its most hazardous stretches towards the rugged Cebreiro mountains, passing an old Saracen castle, (Castrum Sarracenorum) towards the pass and the village of Cebreiro.

This was the gateway to Galicia. A refuge had been built as early as the ninth century to shelter pilgrims from the weather. The pass of Cebreiro, at a height of 1300 metres was known as the Portus Montis Februarii in the Guide. The location benefitted from a number of monastic establishments among them, a priory dedicated to Santa María la Real. 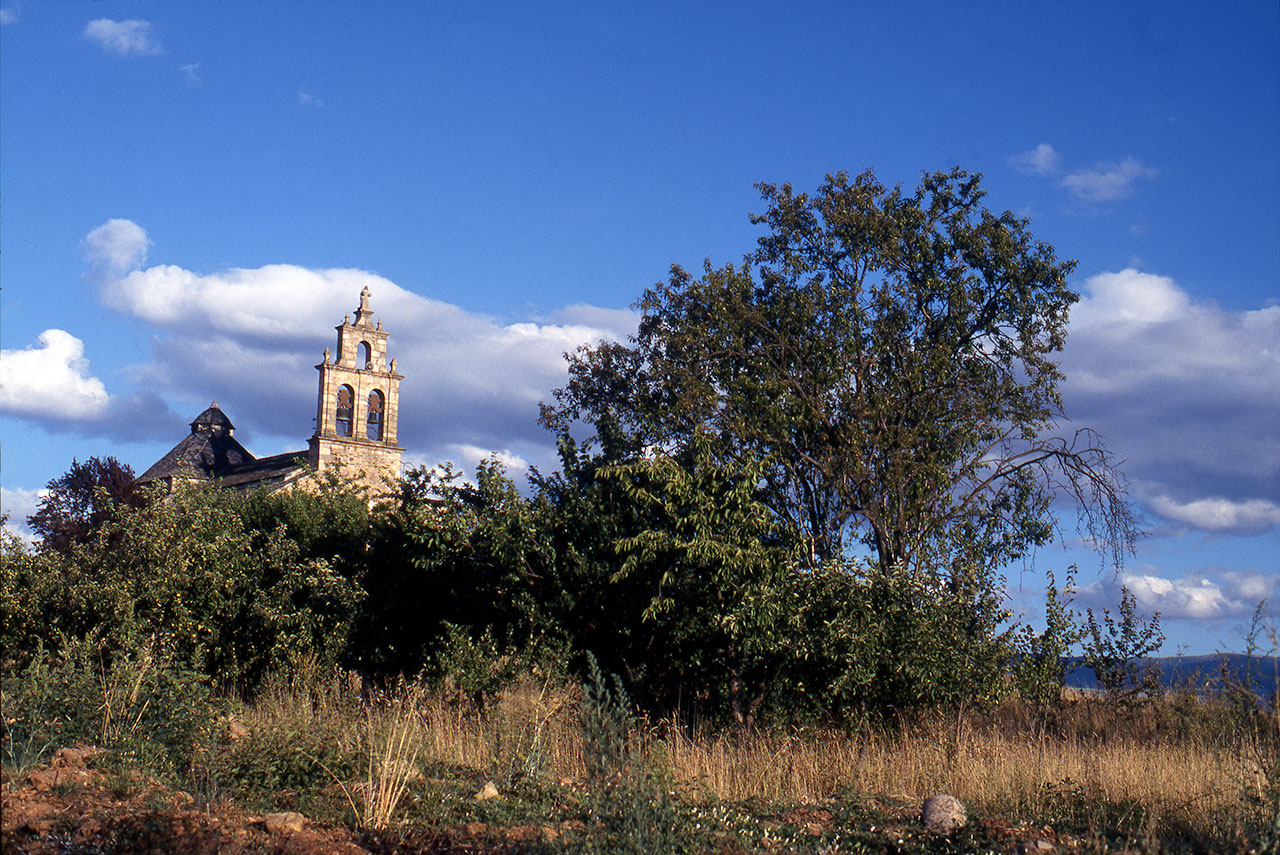 ​A pilgrim’s hospital there is mentioned in the Guide. Donated by Alfonso VI to monks of Saint Géraud d’Aurillac it passed under the control of Cluny shortly thereafter.

The Cebreiro pass was the most difficult obstacle which confronted pilgrims along the whole length of the Camino Francés. It was several kilometres before the road, passing by Linares, began to descend once more heading northwest towards Triacastela, (Triacastella). At Linares, (Linar de Rege) there was a hospital dependent on Cebreiro.

Triacastela was an important halt, the end of the eleventh day’s journey, with a monastery of San Pedro and San Pablo. The Guide mentions a practice whereby pilgrims, already tested by the mountain crossing, were encouraged to carry rocks of limestone a distance of eighty kilometres to the kilns of Castañeda for the construction of the cathedral at Compostela.

Pilgrims were welcomed at the major Benedictine abbey of San Julían at Samos. From Sarria the Camino de Santiago leads to Barbadelo, (Barbadellus) and Portomarín, (Pons Minee) where a major bridge crossed the river Miño, whose waters were considered sweet by the Guide.

Beside the bridge at Portomarín was a hospital and a Templar monastery of Santa María de Loyo.

From Portomarín, the Camino led northwest past Sala de la Reina, (Sala Regine) and Palas de Rey, (Palacium Regis). This latter was the station which marked the eleventh and penultimate day’s journey.

At Libureiro, (Campus Levurarius) a small Roman bridge spanned the Río Seco and a short distance further a four arched bridge carried pilgrims over the Río Furelos. After Santiago de Boente, (Sanctus Iacobus de Boento), pilgrims reached the lime kilns of Castañeda, (Castaniolla) where they could deposit their heavy loads.

The Guide describes two places after Castañeda: Villanova, and Ferreras.

After Mellid those pilgrims travelling on horseback dismounted at Monte del Gozo, (Mons Gaudii) where Compostela first came into view and walked the remaining five kilometres.

At Lavacolla, (Lavamentula) pilgrims carried out their ablutions before finally reaching their goal and entering Santiago de Compostela through the Puerta Francesca, one of the city’s seven gates. Reaching the cathedral, they entered via the northern transept portal, known as the Porta Francigena to venerate the Apostle’s relics.