The Pilgrim’s Guide: There are four roads which converge at Puente la Reina to form a single road leading to Santiago

The Jacobus is the compilation of hagiographical texts devoted to the cult of the Apostle Saint James of Compostela. Sometimes referred to as the Codex Calixtinus, named after the Pope who was proposed as its author, the text consists of five books. The final book, which describes the pilgrimage, has come to be known as the Pilgrim’s Guide. It begins with these words: “There are four roads which, leading to Santiago, converge to form a single road at Puente la Reina, in Spanish territory”.

As a manuscript copied in monastic scriptoria, it is inconceivable that it it was intended as a guide for travellers in any modern sense and indeed its actual purpose remains somewhat obscure.

It consists of eleven chapters of uneven length. The first chapter defines the four roads through France, which meet at Puente la Reina. They are the roads from Arles, Le Puy, Vézelay and Tours, each defined by the principal shrines they passed through.

The next chapter breaks down the stages of the Spanish road into a total of thirteen days’ journey, listing some of the towns and chapter three continues in the same vein with a greater degree of detail occasionally passing praiseworthy or helpful comments on the named places.

As the author puts it “If I have sparingly enumerated the above towns and day’s journey, it was in order that the pilgrims who depart for Santiago, having listened to all this, may try to anticipate the expenses necessary for their travel.” 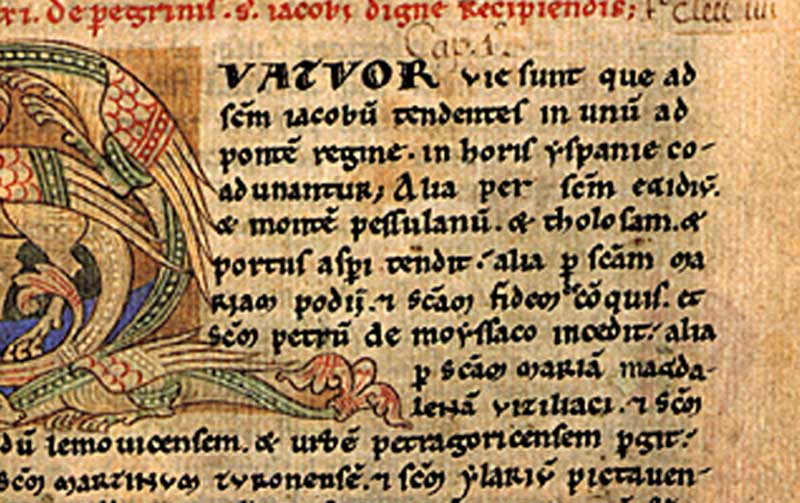 Chapter Four is a brief list of three “hospices”, one at Jerusalem, one at the Great Saint Bernard Pass in the Alps and Santa Cristina at the Somport in the Pyrenees. These were hospitals for the care of pilgrims and by including the latter puts the Compostelan pilgrimage on a par with those to Jerusalem and Rome.

Chapter Five is a list of names of “viatorum” of the pilgrimage road, men who worked to build the infrastructure of the Camino, specifically between Rabanal and Portomarin along with a prayer for their souls. The chapter is signed, “Aymericus”, a name much associated with the compilation of the text.

Chapter Six is ascribed to Pope Calixtus and provides information on the waters of the rivers which pilgrims met along the route and whether they were drinkable or not.

Chapter Seven, a lengthy piece, gives rather crude information on the nature of the peoples and their lands that pilgrims would find along the road from France and through Spain. Some are described in generous terms, other less so, especially the Navarrese who are considered most perfidious.

Chapter Eight provides a list of twenty-seven saintly shrines, which the authors consider important enough for pilgrims to break their journey and make a halt in order to venerate the relics there. It is this chapter, which helps to trace the course of the French roads, given scant detail in the opening two chapters. By enjoining pilgrims to make a halt at various sites we can see that for instance, Arles, Poitiers, Périgeux, Orléans and Saintes were also important stations.

Each section dedicated to a particular saint is accompanied by a brief hagiography, the longest being reserved for Eutropius of Saintes.

Finally, the last three chapters are devoted to the pilgrim’s goal, Santiago de Compostela itself. These chapters provide detailed descriptions of the cathedral and the liturgical appurtenances of the altar with the apparent aim of establishing the status of the shrine as a pilgrimage destination beyond compare.

The Pilgrim’s Guide was undoubtedly compiled from more than one source, as was often the case in medieval manuscripts, where sections of text might be copied from disparate sources and presented as a homogenous piece. The most likely intention behind the text of the Guide would be the same, if not more so, as for the whole five books of the Jacobus, namely, to promote the cult of Saint James for a relatively small audience of powerful clerics and royalty, making the case for Compostela to be considered an authentic pilgrimage destination to rival Rome and Jerusalem.