The Camino Francés: Burgos to León 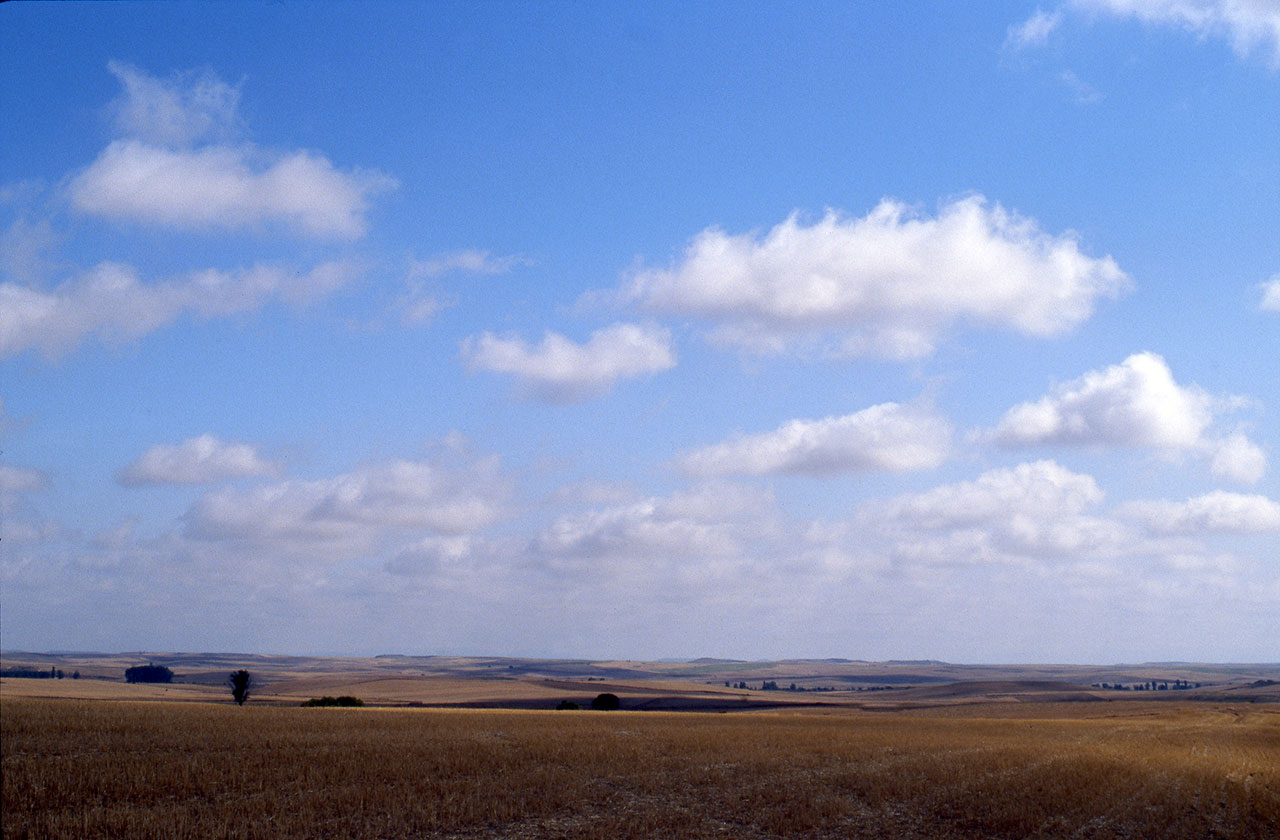 The Pilgrim’s Guide, the twelfth century Latin text which determined the course of the road to Santiago de Compostela known as the Camino Francés, describes the road between Burgos and León. After Burgos, the Camino Francés soon enters the Castilian Meseta, a large featureless expanse of grassland towards Tardajos, (Alterdallia) and Castrogeriz, (Castro Sorecia), both locations mentioned in the Guide

The desolate Meseta would become baking hot in the summer months. Above Castrogeriz was an the ancient Visigothic castle which gave its name to the town and dominated the land beyond. From there the plain rose from the valley of the Odrilla river before descending again to the Río Pisuerga, (Pons Fiterie). Mentioned in the Pilgrim’s Guide, there was a bridge of eleven arches, built originally in the eleventh century at the behest of Alfonso VI, which bore pilgrims over the Pisuerga and into the kingdom of León. 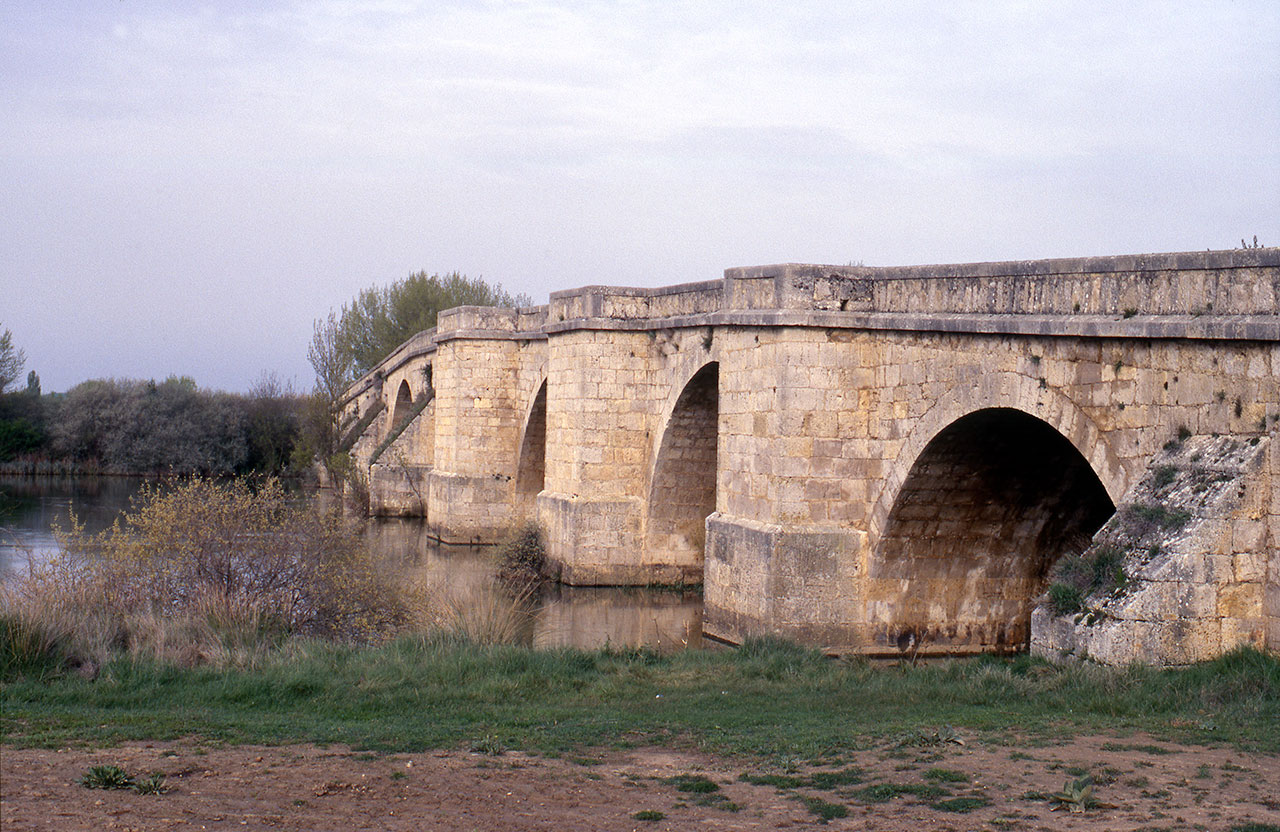 Beyond lay Frómista, (Frumesta) one of the wealthiest towns of the plain. Frómista was the centre of the vast wheat producing area and great monastery dedicated to Saint Martin de Tours had been established there by Doña Mayor the widow of Sancho III of Navarre in 1066, possibly the same queen who had sponsored the bridge at Puente la Reina. In 1118 the monastery was given over to the Cluniacs of the nearby San Zoilo de Carríon de las Condes. Fromistá was a major station of the Camino Francés and according to the Guide, the sixth day’s journey of the Camino began at Burgos and ended at Frómista.

The road out of Frómista continued over the Meseta across the Tierra de Campos a seemingly interminable, flat land stretching out to the distant horizon. The land had originally been called the Gothic Plains after the Visigoths who had fled there from Aquitaine in the sixth century.

After Frómista, the Camino turned north westwards twenty-eight kilometres to Carríon de los Condes, (Karrionus). Originally known as Santa María de Carríon, it was a major town and station of the pilgrimage road despite being half way between Frómista and Sahagún, which according to the Guide, in its overly optimistic manner was the next stopover. On the banks of the river Carríon, the town maintained hospices for pilgrims and broke up the crossing of the dreary forbidding terrain. The Guide describes it as “A well managed and industrious town”

Just outside the town the important monastery of San Zoilo was a major Cluniac Benedictine establishment which had been founded in 1047 but whose importance grew with the arrival of the French monks and the relics of Saint Zoilus from Córdoba, renowned for miracles.

Another abbey, Santa Maria de Benevivere lay a short distance further along the Camino as the road continued across the empty flatlands where the Knights Templar patrolled the road. At San Nicolás, Augustinian canons maintained a hospice. 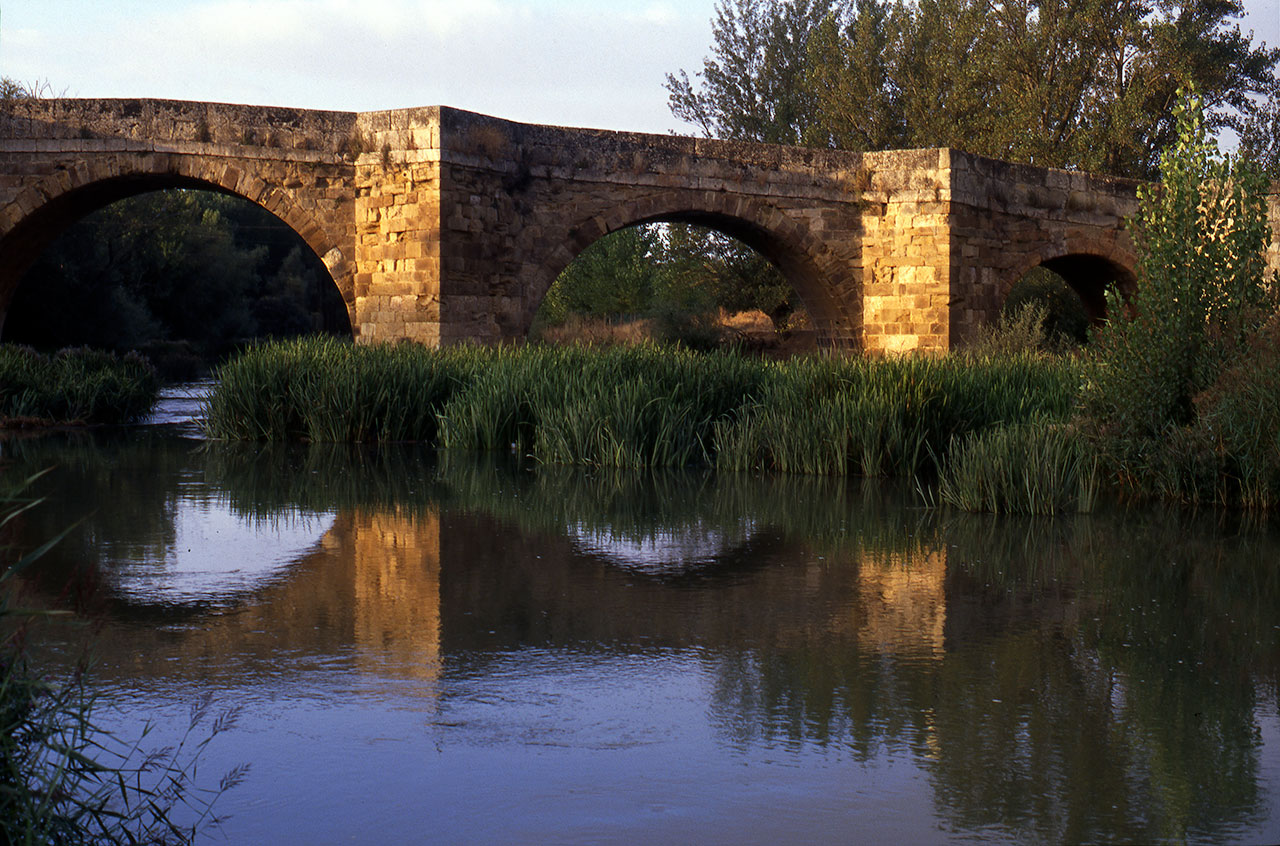 On the banks of the river Cea pilgrims arrived at Sahagún, (Sanctus Facundus), “A city filled with every type of prosperity”, according to the Guide and the end of the seventh day’s journey.

The same text also alludes to a major episode of the History of Charlemagne and Roland. There was a meadow on the outskirts where once, Frankish knights on the eve of battle, had planted their spears in the ground and found them sprouting leaves the following morning. Each knight would die a martyr that day.

Sahagún was an important stop and the arrival there in 1079 of monks from Cluny at the invitation of Alfonso VI was a major development in the attempt to reconnect Spain with the rest of Europe beyond the Pyrenees and in Cluny’s investment in the pilgrimage to Compostela. The Cluniac monks took over the monastery of Saints Facundus and Primitivo which subsequently became their most important establishment in Spain.

With over fifty dependent priories the abbey of Sahagún was able to use its wealth to the benefit of pilgrims.

The hospital had sixty beds available for pilgrims. The king emperor of León-Castile, Alfonso VI elected to have himself entombed at the abbey of Saint Facundus after his death in 1109.

From Sahagún pilgrims left over the bridge across the Rio Cea and passed the celebrated meadow where the legendary Miracle of the Lances had occurred. The route headed northwest towards León via Mansilla de la Mulas using the old Roman road. A short way off the Camino was the Mozarabic monastery of San Miguel de la Escalada.