Via Tolosana – One crosses Saint-Gilles, Montpellier, Toulouse, and the pass of Somport

The Road of Toulouse or Via Tolosana was the most southerly French route, leading from Provence to the Pyrenean pass of the Somport.

It began at the ancient Roman necropolis of the Alyscans cemetery  and its myriad saintly tombs, just outside the city gates of Arles. Pilgrims proceeded to the cathedral of the city where relics of Saint Trophimus were held.

Arles had been the metropolitan see of Gaul in the fourth century and so had a long and rich history as an important religious centre.

Crossing the Rhone delta to the great abbey of Saint Gilles, pilgrims venerated the relics of this saint, one of the preeminent of the day, at his tomb in the cavernous crypt. Many pilgrims made the detour to Les Saintes-Maries-de-la-Mer, the legendary location where Mary Magdalene had reached landfall after fleeing Palestine in a boat with numerous disciples.

From the Rhone basin, the Guide mentions two alternative routes, one followed the Roman Via Domitia along the Mediterranean coastline to Montpellier where a statue of a black Madonna was the focus of an important cult. Beyond was the abbey of Saint Thibèry whose relics of the martyrs of Agde, Tiberius, Modestus and Florence, pilgrims were enjoined to venerate. From there they continued on towards Béziers and Narbonne. 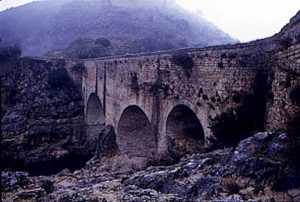 The other route led north from Saint Gilles towards the mountains of the Languedoc and the remote abbey of Gellone which housed the relics of a very popular saint, the warrior monk Guilhem whose heroic feats during the time of the Carolingian emperors were retold in many epic songs.

This road continued over the mountains with one alternate road passing by the important abbey of Saint-Pons de Thomières and another via the abbey of Saint Gervais-sur-Mare.

The southerly road from Narbonne headed north towards Carcassonne and all the roads directed themselves towards the great destination of the ancient city after which the road was named, Toulouse and the shrine of Saint Saturninus at the vast pilgrimage church there.

From Toulouse pilgrims headed south towards the Pyrenees via Lescar and Oloron-Sainte-Marie. Following the course of the valley of the river Aspe along the old Roman road that led to Saragossa, they crossed the mountains over the Somport Pass into Aragonese territory. Pilgrims were cared for at the hospice monastery of Santa Cristina, after which the road descended towards Jaca.