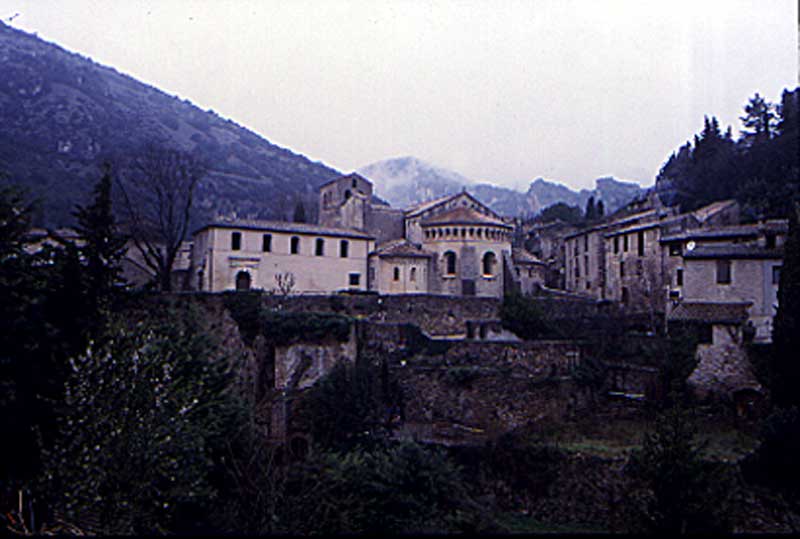 Saint Guilhem le Désert, orginally known as the abbey of Gellone was an important stop for pilgrims to Compostela traveling the Via Tolosana even though it required them abandoning the most direct way and instead heading up into the rugged hill region of the Languedoc.

There, were kept the relics of Saint Guillaume d’Orange. Guillaume was a warrior monk, an early archetype of the Christian knight that would eventually would lead to the formation of the Order of Knights Templar. Guillaume was a paladin of the time of Charlemagne and his successor Louis the Pious. Count of the region of Orange, Guillaume was instrumental in repulsing the Saracens from southern France.

After numerous victories he turned his back on the world into order to spend his last years as a hermit in a remote valley in a rocky region where the Herault river has worn a narrow defile rendering the site  virtually inaccessible. Guillaume’s example attracted other monks who eventually formed the abbey of Gellone, known later as Saint Guilhem le Désert.

Guillaume’s actual exploits became the stuff of legend and a rich source for the Chansons de Geste which flourished in the eleventh and twelfth centuries. His successful campaigns against the Saracens were rendered as epic battles, one of which took place at the necropolis of the Alyscans where the fallen heroes were  subsequently buried. The abbey of Gellone grew into a major monastic centre  and Guillaume’s cycle of Chansons was the most popular of all the Chansons de Geste. Pilgrims were drawn by his relics and the fragment of the Holy Cross which he had donated . 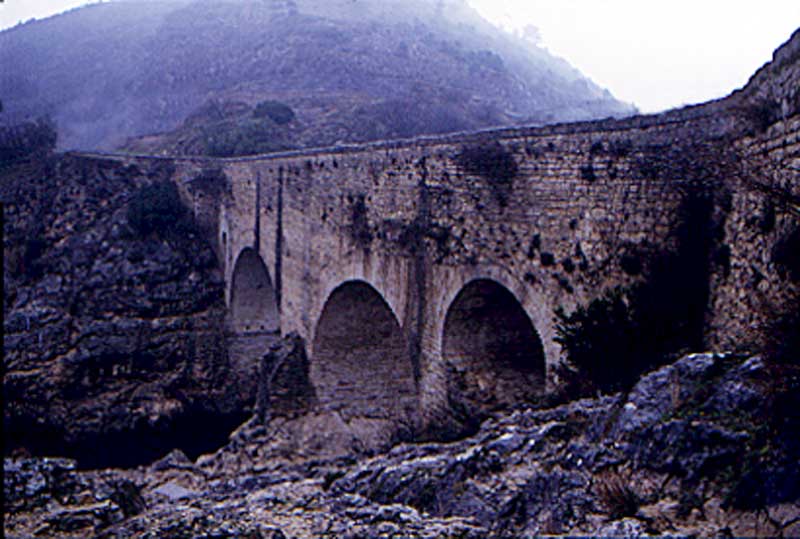 A bridge was built in the eleventh century to connect the abbey of Gellone with the nearby abbey of Aniane and facilitated the passage of pilgrims across the deep gorge of the river Hérault which seperated the two monasteries.

Like many medieval bridges its construction involves a legendary story involving a duel with the Devil from which it derives its name. The road continued after the abbey upwards towards the aptly named Cirque du Bout du Monde