On the south aisle of the basilica of Marie Madeleine at Vézelay in Burgundy is an exceptional carved capital often referred to as the Mystic Mill. 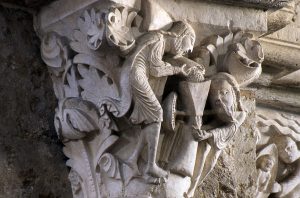 The depiction of two male figures, one pouring grain into a mill and the other receiving the processed flour into a sack is unique in Romanesque sculpture and does not appear to depict any Biblical or hagiographical episode.

A clue to the identity of the two figures is to be found in a stained glass window at the abbey of Saint Denis, created around 1140 and therefore roughly contemporaneous with the Vézelay capital. Two figures carrying sacks over their shoulders are approaching a man turning the wheel of a mill. The inscriptions around the window identify the latter as Saint Paul and one of the two sack carriers as Moses.

This identification helps unlock the key to understanding the image of the capital as  an allegory of the transformation of the Old Law, represented by the coarse grain, into the New Law symbolised by the fine processed flour. 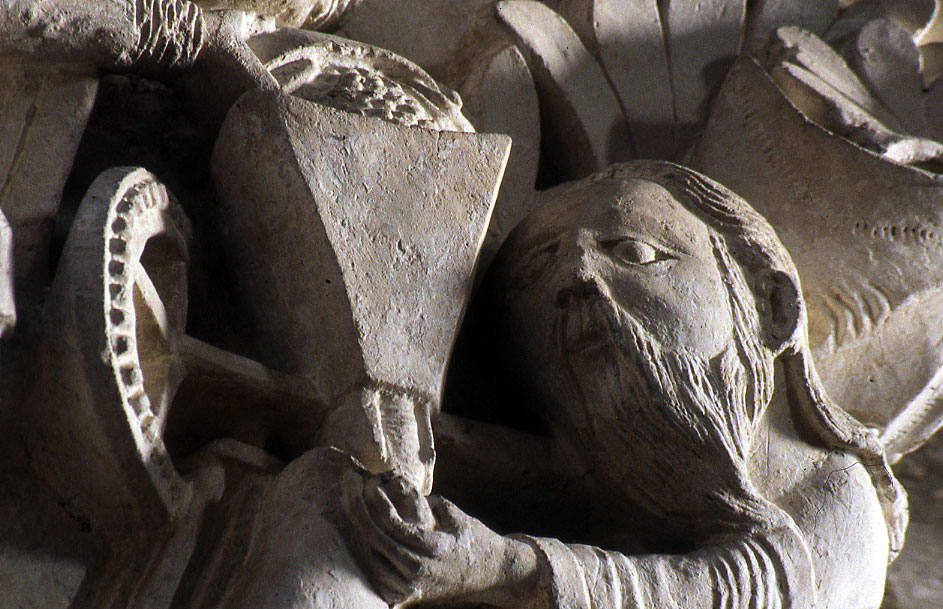 This is confirmed by the cross within the mill wheel which functions as both the mill’s transformative process while simultaneously denoting Christ’s Passion on the Cross. In this way, the crucifixion is equated with mechanism of the mill and thus the instrument which converts the Old Law whereby Man was doomed by sin to Death and the New Law whereby Man, redeemed by the Passion, obtains the promise of Eternal life.

Significantly, this is the theme of Paul’s Epistle to the Romans. The image holds further subtleties in the respective clothing of the two figures. 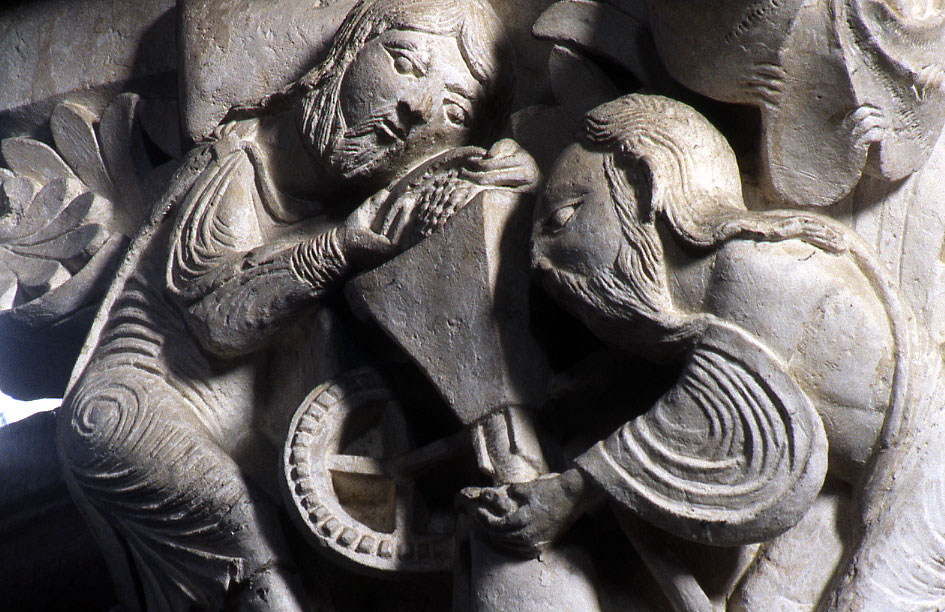 The theme of Redemption as a liberation is continued by Moses’ short tunic which implies his status as a slave contrasted with Paul’s toga which casts him as a free citizen. Added to this are the shoes worn by Moses denoting his status as earthbound in contrast to Paul’s bare feet, suggestive of lightness, air and flight. This opposition was derived from a symbolism found elsewhere in Romanesque art to indicate a movement from one state to another.

There was also additional meaning relating to the sacks carried by the two men which combined all these elements. In a tradition which arose from an exegetical analysis of the Genesis story of Joseph leaving wheat sacks for his brothers, which upon opening were found to contain silver, Bernard of Clairvaux’s sermon for the Epiphany declared, “Behold that God, the Father has sent down to earth like a sack filled with his pity: a sack, I say, torn by the Passion in order to spread that which is hidden within, our ransome; a sack in truth, small perhaps but full.”