The Scallop Shell: The Journey to Emmaus

Representations of the pilgrimage to Compostela in Romanesque sculpture are rare. Nevertheless, such depictions are remarkable when the contemporaneous pilgrimage is conflated with the New Testament story of the Journey to Emmaus from Luke’s Gospel. At the cathedral of Saint-Trophime at Arles this scene is presented on the central pier of the north side of the cloister. The Risen Christ is flanked  by two disciples, one of whom is dressed in the garb of  a twelfth century pilgrim, a scallop shell sewn onto his headgear.

The city of Arles was profoundly connected to the Compostelan pilgrimage and is mentioned at length in the Pilgrims Guide as the location of several shrines the reader is admonished to visit.

According to the Gospel narrative, two disciples travelling from Jerusalem to their home at Emmaus in the aftermath of the Crucifixion are joined by a third figure who they do not recognise. Upon their arrival they invite the stranger to join them in a meal and it is only when He breaks the bread that they recognise Him as the Risen Christ.

This combination of the journey and the meal led to medieval liturgical drama relating pilgrimage with the Eucharist and this lies behind the image on the north tympanum of  the narthex at Vézelay. One reason for this conflation is the word Christ uses in the gospel narrative to describe himself: “a stranger ” which Jerome had translated as “Peregrinus” the etymological source for medieval word pilgrim. 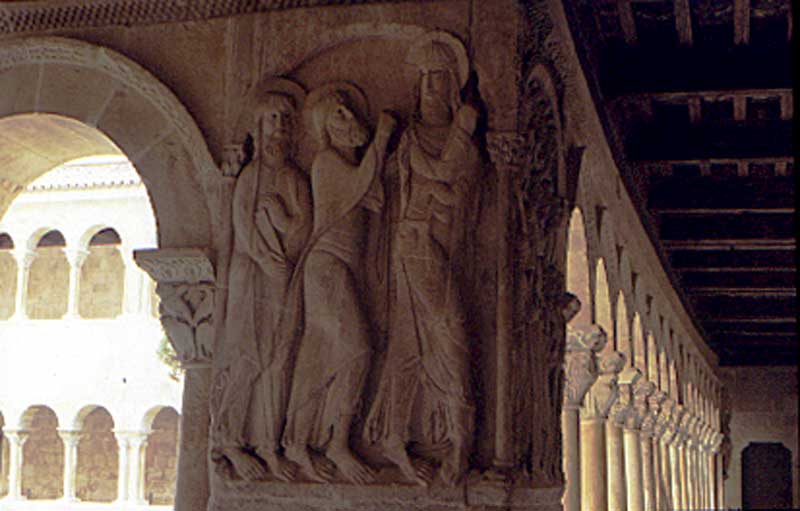 Another, quite startling variant on the depiction of the scene is to be found on the pier of another cloister, that of the Benedictine abbey of Santo Domingo de Silos south of the pilgrimage road near Burgos.

At each corner of the cloister, pairs of sculpted piers depict images of the Resurrection. At the north eastern corner, the image of Christ revealing his wounds to Thomas. This is paired with the Emmaus Story.

What is remarkable in this depiction is the figure of Christ himself. The two disciples are to the left of Christ,  who is here portrayed with the attributes of the Compostelan pilgrim, the staff and the scarcella purse bearing the scallop shell.

This seems an aberrant deviation from the Christocentric principle proposing as it does, Christ as a devotee of his own Apostle. Nevertheless, the Veneranda Dies sermon which features among the liturgical texts which are included in the Liber Sancti Iacobi, alludes to such an image. The pilgrimage and the scallop are associated with Christ in a number of instances. “Therefore, just as the pilgrim bears the shell as long as he is in the course of his present life, he must also carry the yoke of the Lord” and “Our Lord Jesus Christ himself returning from Jerusalem, after His Resurrection from the Dead, appeared first as a pilgrim”.

The Romanesque sculptural image of Santo Domingo de Silos includes the idea of the Compostelan pilgrimage in its Resurrection cycle and the implied promise of redemption for the traveller to the shrine of Saint James is expressed in the Veneranda Dies sermon as it is on the Last Judgment tympanum at Autun: “And it is truly right and just that one who has sought such a great apostle and such a great man in such a remote region in toil and hardship may receive with Saint James the crown in the heavenly land.”

This is a revised version of a previously published post