The Romanesque Ass and the Harp

| Ass and the Harp Romanesque Sculpture

The image of an ass playing a harp is a recurrent theme in Romanesque sculpture. Invariably restricted to marginal areas such as modillions and corbels or the outer archivolt of a porch entrance.

Such an emplacement would normally be reserved for cautionary and protective subjects implying a negative interpretation such as, in the case of the Ass and the Harp a symbol of Ignorance. Examples can be found on the southern transept doorway at Aulnay de Saintonge and among the numerous modillions at San Martin de Frómista.

This interpretation seems complicated by the appearance of the same subject throughout history in different contexts.

The medieval world knew of the fable of the Ass and the Lyre primarily through the writings of the sixth century philosopher Boethius. Boethius himself had derived his account from Phaedrus who in the first century had translated Aesop’s fables into Latin.

In Phaedrus’ version a donkey sees a lyre lying in a field and tries to strum it with his hoof. When he hears the beautiful sound he says that if someone better equipped than himself had found the instrument he would have been able to enjoy the music.

This contrast between the ass’ attributes; large ears for listening, hooves instead of hands for playing and the dissonant sound of a donkey’s bray against the innate harmony of the instrument was particularly suggestive to medieval writers.

For Raban Maur with reference to Matthew 21 and Jesus’ Entry into Jerusalem, the ass represented paganism. The ass unable to benefit from the perfect harmony of the music which represented the presence of God in the universe opposed the image of King David playing the harp, so frequently displayed on Romanesque churches.

However the symbolism of the Ass and the Harp extends further back than Aesop to ancient Babylonia.  Perhaps not surprising when one considers that Aesop’s fables themselves, were derived from earlier stories which came to Greece from the east via the stories of the Assyrian sage Ashikar. 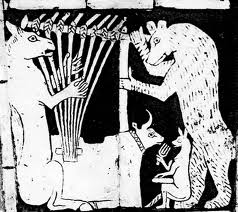 A Sumerian tomb dating back to 3,000 BC included a sacred harp used for accompanying the chanting of prayers and which itself featured an image of a harp playing ass carved onto it. In a curious  instance of self referentiality, the image of the harp is a rendering of the design of the actual harp which is distinguished by the bull’s head which surmounts its sound box. Significantly, the ass has fingered hands to play the instrument and  portrayed as the source of the sacred ceremonial music, the image is suggestive of a divine aspect.

Eastern cults of Apollo originating in Phrygia involved the god Marsyas, a divine ass. The Ass deity was flayed alive by Apollo in a sacrificial ritual, a pre-Christian example of deicide.

The association of the ass with the divine continued into Biblical texts notably with Balaam’s Ass which was able to recognise the angel blocking the way indicating connection between the ass and the divine. The extension towards sacrificial concepts occurs in Isaac’s journey into Moriah and Jesus’ Entry into Jerusalem. All three were favourite subjects of Romanesque sculpture.