Samson was a Nazirite, a Hebrew who took special vows. These were to abstain from wine and the proximity to dead corpses and the cutting of one’s hair. The preponderance of images of Samson in

Romanesque sculpture may be connected with the similarity between the two words Nazirite and Nazarene, the word often used to describe Jesus. The connection extends also to the circumstances of their birth. There are several Old Testament figures who were considered precursors of Christ, notably David and Isaac. Samson was among them.

The story of Samson is told in the Old Testament book Judges, Chapters 13-16. He was the hero of the Hebrews against the Philistines and was endowed with supernatural strength. His birth was announced by the appearance of an angel to his barren mother. The angel declared that the boy would be “a Nazarite unto God

from the womb”. It was this quality of the Nazirite which bestowed on Samson his celebrated superhuman strength.

At the time of his birth, the Hebrews had been conquered by the Philistines and lived in subjugation. Samson would be their redeemer, it was foretold.

The two principal episodes of Samson’s life which are represented in medieval sculpture are the stories of Samson and the Lion and the treacherous deception by Delilah.In the episode of Delilah’s treachery we are dealing with the source of Samson’s special connection with God which is his Nazirite vow predicted by the angel at his birth that “no razor shall come on his head”.

This episode is depicted on a capital in the transept of the church of Saint-Pierre-de-la-Tour at Aulnay de Saintonge. The Philistines have engaged Delilah to persuade Samson to divulge the secret of his strength which lies in his hair. When he is asleep, Delilah cuts the seven locks of Samson. 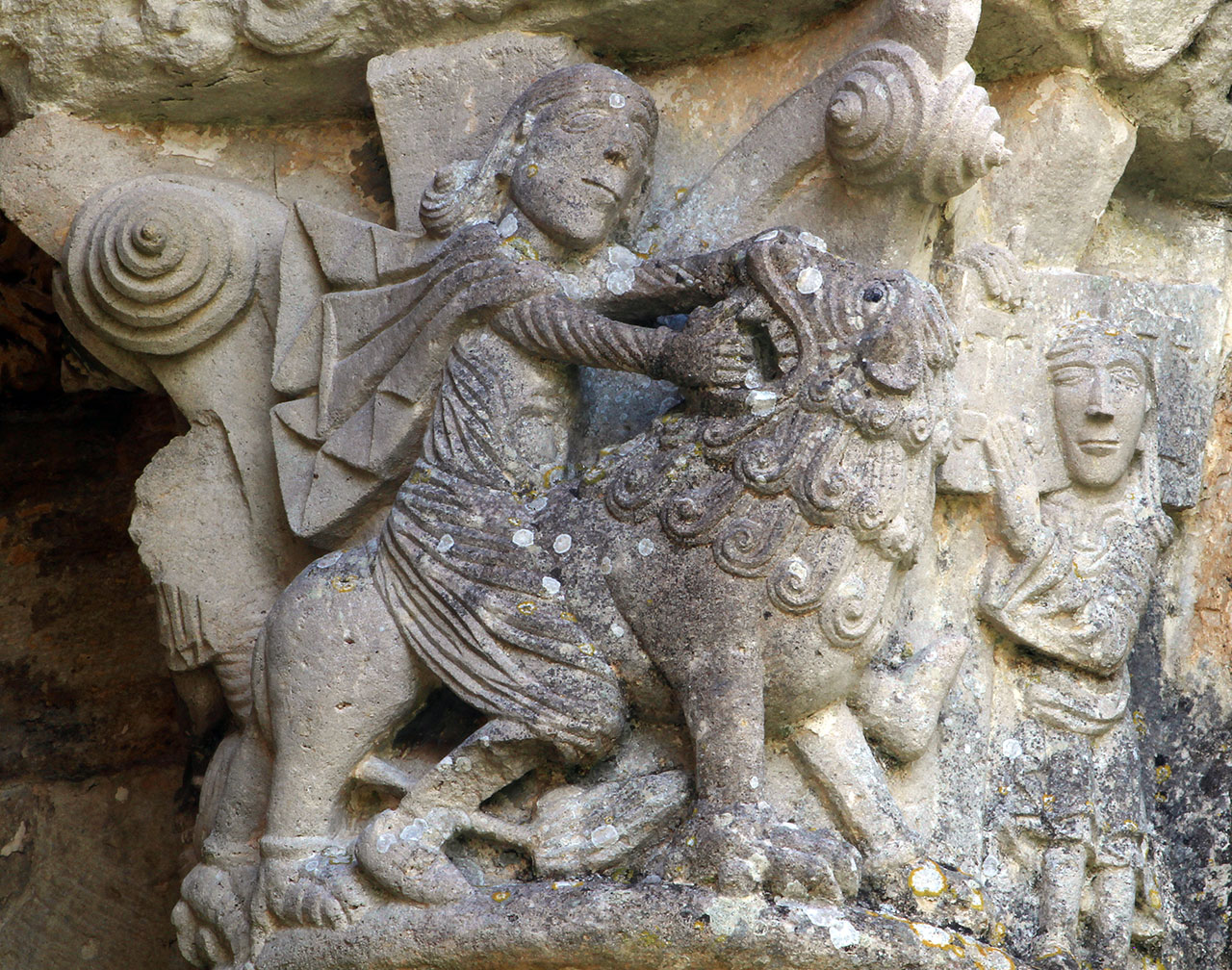 It is the story of Samson and the Lion however, which seems to have caught the medieval imagination especially, as indicated by the frequency with which it is represented. At the abbey of La Sauve-Majeur, east of Bordeaux it is shown on a capital in the choir. The story is represented by the image of a man grabbing the jaws of a beast and prising them apart. Not all images of a man grappling with the jaws of a lion are of Samson as another Old Testament hero, David is often depicted in the identical pose. The capital at La Sauve Majeur features another episode of Samson’s story, the carrying of the gates of the city of Gaza on its other face making the indentification as Samson, unequivocal.

Samson is on his way to meet his future bride, a Philistine. He comes across a lion when, “the Spirit of the Lord came mightily upon him” and barehanded, Samson tears it apart. He tells noone of this and when he returns he finds that a swarm of bees have nested inside the lion’s dead carcass and produced honey. Taking the honey he eats some and carries the remainder and offers it to his father and mother.

The use of the image of Samson and the Lion preceded the Romanesque period and is found on Carolingian ivories such as the liturgical comb from Metz from the late ninth century.

Ultimately, the iconography derives from the depictions of the Labours of Hercules. In depictions of Hercules and the Ceryneian Hind such as the sixth century marble relief from Constantinople held at the Museo Nazionale in Ravenna, the pose is identical of a man grabbing the horns of a wild beast, in this case the antlers of a deer.

A Roman mosaic from Spain shows Hercules grappling with the Nemean lion which was the first of his labours. Both of these image went back to the golden age of Greece and then later fed into the Cult of Mithras, the Roman military god who was always shown wrestling a horned bull.

Although images of Samson and the Lion appear throughout Romanesque art, in the Poitou region of western France they feature prominently on the facades of certain churches.

The Poitevin church at Saint-Pierre de Parthenay-le-Vieux was a Benedictine priory of the abbey of La Chaise-Dieu.

On the façade there are two arcades on either side of the entrance. To the right is a large sculpture of Samson and the Lion.

The left arcade features the archetypal imperial horseman variously identified as Constantine and Charlemagne vanquishing the forces of paganism as he tramples them underfoot. The juxtaposition of the two images implies the interlinked function of the Church and State. Twin functions of the Church: Redeemer and Militant.

As a hero of the Hebrews against the Philistines, Samson was a defender of the Chosen People and by the Romanesque period the Christians were engaged in their Holy War with the forces of Islam and therefore the choice of Samson and the Lion at Parthenay in order to complement the Emperor as Defender of the Faith is worthy of consideration.

The Hebrew Philistine opposition was now replaced by the contemporaneous one between the Christianity and Islam of the Crusading era.