Sainte Foy: Long ago the holy martyr’s body was secretly carried away from the city of Agen and brought to Conques by two monks

Along the Via Podensis pilgrims directed their way over harsh terrain and through inhospitable lands to reach a remote sanctuary, the great abbey of Conques.  It was there that were housed the relics of a virgin martyr of the Roman persecutions of the early fourth century.

Sainte Foy’s reputation for miracles was celebrated throughout Europe. 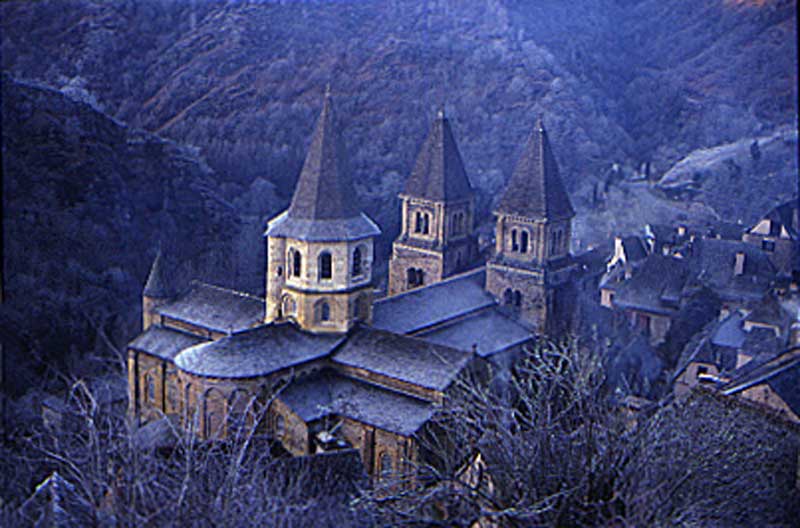 The monastic church was the first of the five great pilgrimage basilicas built at the end of the eleventh century, one of which was the cathedral of Santiago de Compostela. They were all built to the same plan with the purpose of accommodating the vast crowd of pilgrims who came to venerate the saintly relics.

Conques had grown from a small hermitage located by a mountain spring into one of the most powerful and eminent monasteries  of its day. Once an impoverished abbey, its fortunes changed considerably for the better when the monks audaciously stole the relics of their miracle working saint from another monastery in the year 866.

They had encased the relics in an imposing gold reliquary statue studded with precious gems. 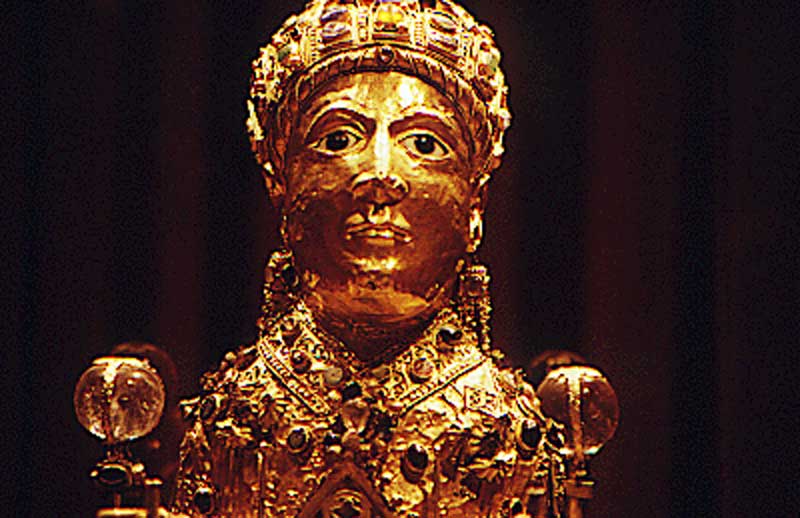 This was the Majesty of Sainte Foy. It was kept on the high altar and was protected by a wrought iron grille forged from the chains and manacles of prisoners released from captivity by the saint’s intercession and then come to Conques to offer the instruments of their oppression as ex-votos.  The figure was seated on a throne, symbol of the saint’s role as judge over human affairs.

The head was reputedly constructed from the death mask of a Roman emperor. Inside the bones were wrapped in a shroud of  imperial purple linen from Byzantium. The sick and lame came to pray before the golden reliquary famous for restoring eyesight to the blind.

The news of the saint’s miracles spread. In 1013 Bernard of Angers a sceptical cleric from the north visiting Conques was impressed by what he saw; “What was true through God’s will could not be suppressed and belief in its truth was already spreading through all Europe”, he wrote.

Conques became a vital station on the pilgrimage road to Compostela and its monks  were installed as abbots and bishops in monasteries and towns recently recovered from Saracen rule by the Crusaders of the Spanish Reconquest. Its territory and possessions grew and included numerous establishments, the monastery at Roncevaux, being the most significant.