Espalion was an important halt on the Puy Road to Compostela. Pilgrims who travelled this route would have come from Marian shrine of Le Puy-en-Velay via Saugues and the desolate landscape of the high plateau of the Aubrac. 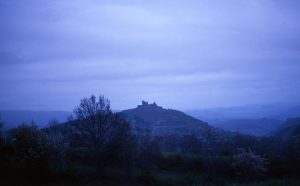 The pilgrims were journeying not only to Compostela, their ultimate objective, but also to the great abbey of Conques to venerate the golden effigy which contained the relics of Sainte Foy.

Descending from the Aubrac via Saint Chély and Saint Côme, they arrived at the Lot river but rather than follow the course of the river valley, at Espalion they crossed to the other side to direct themselves towards Conques which was located in a remote valley.

A short distance from the river bank was a priory located just above a stream known as the Perse. Legend had it that this was the site of the martyrdom of Saint Hilarianus. 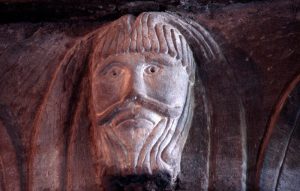 Hilarianus, it was said had been educated for the priesthood at the court of Charlemagne, eventually becoming the emperor’s confessor. Renouncing the prospect of an illustrious carreer and the life of the imperial court, Hilarianus chose instead to return to his homeland in the Rouergue, where he worked as priest at the chapel of Perse.

At that time the lands south of the Lot were occupied by Saracens and in the year 793 while performing office in his chapel the saint was captured and decapitated. 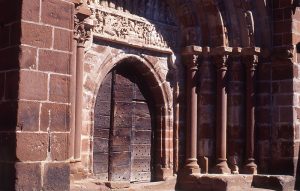 The legend of Hilarianus claimed that he had walked from Perse and washed his head in a sacred fountain, which came to be called Fontsange and return it to his mother to fulfill a promise previously made should he succumb to the Saracens. It was over the fountain that the town of Espalion was later established.

This story places Hilarianus in the tradition of other saints such as Genesius of Arles, Aphrodisius of Béziers and Saint Denis, known as cephalophores or head carriers who after being decapitated miraculously rose and bore their own head. 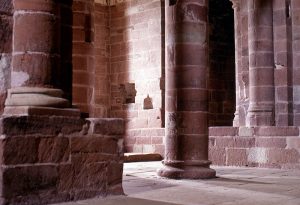 The church of Perse became a monastery dedicated to preserving the cult and relics of Hilarianus and in 1060 it was donated by the local lord Hugues de Calmont to the abbey of Conques and it became a dependent priory under the patronage of Sainte Foy.

Nevertheless, relics of a martyr of the Saracen conflicts from the days of Charlemagne were a potent attraction from pilgrims who travelled on the Via Podensis to Santiago de Compostela in the twelfth century and the presence of the mortal remains of Saint Hilarian made Perse and Espalion an important halt on the pilgrimage road.

Video: The Puy Road at Espalion