The Pilgrimage Roads: Of the Route of Saint James 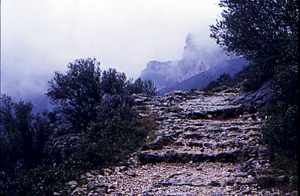 The pilgrimage roads to Santiago de Compostela numbered four. Like the four rivers of Paradise which flowed to the four cardinal points, the four roads to Compostela had a symbolic resonance. These earthly ways led westward towards the prospect of a return to Paradise.

The final book of the Codex Calixtus, often called the Pilgrim’s Guide, begins with these words: “There are four roads which, leading to Santiago, converge to form a single road at Puente la Reina, in Spanish territory”.

The routes were defined by the location of the most important saintly shrines on the way and the pilgrimage to Compostela became a cumulative sacred experience.

In modern times, these four roads have been named according to the principal town on the route. Thus we have the Road of Tours which leads from northern France down the western side of France. The Road of Limoges passes through Burgundy and the centre. The Road of Le Puy crosses the Auvergne. The Road of Toulouse leads from Provence through the Languedoc region.

The Pilgrimage to Santiago de Compostela which, as well as linking so many reliquary shrines along its highways and byways, was also the source of numerous legends of a mystical nature so that the terrestrial road itself was invested with an inherent and immanent sacred character. This is perfectly expressed in the legend of the Milky Way, wherein the road to Compostela could be traced by following the course of the stars of that galaxy across Europe to its furthest edge in northwestern Spain.