The Burial Grounds of Roncevaux

Video: The Tours Road from Talmont to Belin

The burial grounds of Roncevaux were important shrines for medieval pilgrims. Among the relics which pilgrims travelling to Santiago de Compostela were able to venerate were the tombs of the fallen heroes of Charlemagne’s armies who had lost their lives at the battle of Roncevaux and other military engagements against the Saracens.

The Pilgrims’ Guide and the History of Charlemagne and Roland as well as the epic legends of the Chansons de Geste cycles, notably the Chanson de Roland, were specific as to where they had been taken for burial. There were some differences in the accounts concerning the location of the burial sites due to the variations arising from oral traditions, nevertheless these texts paid keen attention to identifying the tombs.

This was because they were considered martyrs. As  saints who had already ascended to Paradise before the Day of Judgment, they were worthy of veneration and capable of intercession. They were also exemplars of the Crusading spirit and their memory was an effective incentive in the eleventh and twelfth century crusading mentality.

With Cluny and the Papacy encouraging military aid to fight against the Saracens of Spain the idea of the Holy Warrior took root in the notion of the knight who died in defence of the faith.

Ultimately, this became explicit in Pope Urban’s call for the first Crusade to the Holy Land in 1095 but such a view of violence in the just cause had been gestating for some time. In the early tenth century Odo, abbot of Cluny had written a hagiography of the knight Gerard d’Aurillac. In 1064 Pope Alexander II called for the first official Spanish crusade against the Saracen held city of Barbastro. The epilogue of Turpin’s History is in fact a letter from another pope, Pope Calixtus II, which is itself another call to crusade in the Iberian peninsula. These ideas of militant Christianity found their greatest expression in the order of the Knights Templar

The History of Charlemagne and Roland makes evident the idea that those who had died in battle against the Saracens were martyrs and therefore the proper burial of these knights was a matter of some importance. “They now embalmed the dead bodies of their friends, some with myrrh and balsam, some with salt, taking out the bowels and filling the bodies with aromatic drugs”. 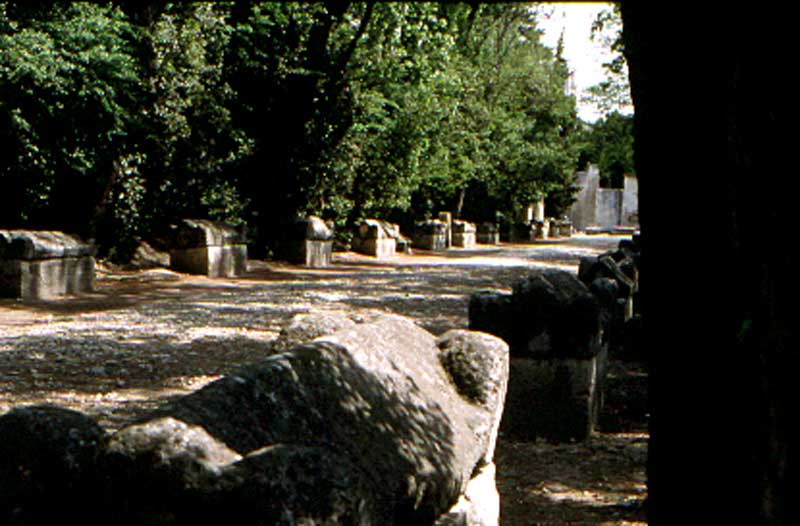 The necropolis of the abbey of Saint Seurin at Bordeaux received numerous of the corpses as did the Alyscans at Arles. A common grave at Belin was the resting place for others. Roland himself according to the Pilgrims’ Guide was entombed at the abbey of Saint Romanus at Blaye.

Also, secondary relics were available to pilgrims for veneration. Roland’s horn the Oliphant was displayed at Saint Seurin. At Blaye, Roland was placed with his sword Durendal.