Christ had named the Apostles James and his brother John, the Sons of Thunder and by the early medieval period James had acquired another name: Santiago Matamoros.

In a very separate but seemingly related mythological tradition, Castor and Pollux, the sons of Jupiter who was himself known as the Thunderer, were similarly designated the Sons of Thunder.

In ancient mythology Castor descended from heaven astride a white horse to become protector of man and slayer of his enemies in battle. Castor and Pollux were venerated in Roman Spain.

In 844, a generation after the discovery of the tomb of Saint James at Compostela, the caliph of Cordoba, Abd al-Rahman ordered a punitive raid on the Christians of the north. The Christian king Ramiro 1st met the large Saracen army on the plain below the castle at Clavijo. 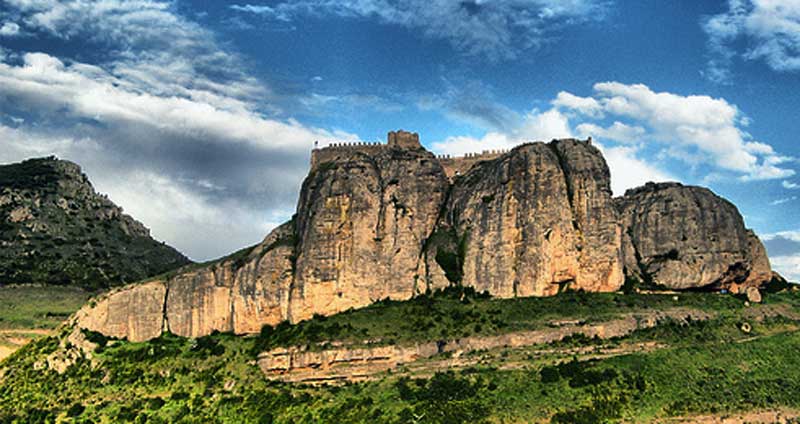 In a dream before the battle, Saint James appeared to Ramiro, predicting his victory. During the course of the ensuing battle a figure on a white horse was seen leading the Christian charge. It was the Apostle himself.

Henceforth, Saint James made visionary appearances during the great battle of the Reconquista leading the Christian forces to victory.

He was named Santiago Matamoros – the Moorslayer.

Visions of the saint on a white charger occurred at Clavijo in 9th century, Simanacas in 10th, Coimbra in 11th and Las Navas de Tolosa 1212. When the reconquest was completed in 1492, Ferdinand & Isabella gave thanks at the shrine at Compostela.

In one of the miracles recorded in the Codex of Calixtus the following story is recounted: A Greek bishop rebuked some soldiers for praying to St James for military assistance. That night he dreamed of St James dressed as a crusader ready for battle.

“Blessed James appeared, clad in white garments, bearing the arms of a warrior, shining with radiance and arrayed as a soldier, holding in his hand two keys. Then he made this position even clearer in words, ‘I am appearing to you so that you will not doubt that God has made me a soldier and a contender and sent me to fight for the Christians against the Saracens and to gain victory for them”.

James, Son of Thunder had descended from Heaven, as had Castor, astride a white horse to protect his people and slay their enemies.