Historia Turpini: The Latin Legend of Charlemagne and Roland

Forasmuch as you requested me to write in what manner the Emperor Charlemagne delivered Spain and Galicia from the yoke of the Saracens, you shall attain the knowledge of many memorable events

The History of Charlemagne and Roland 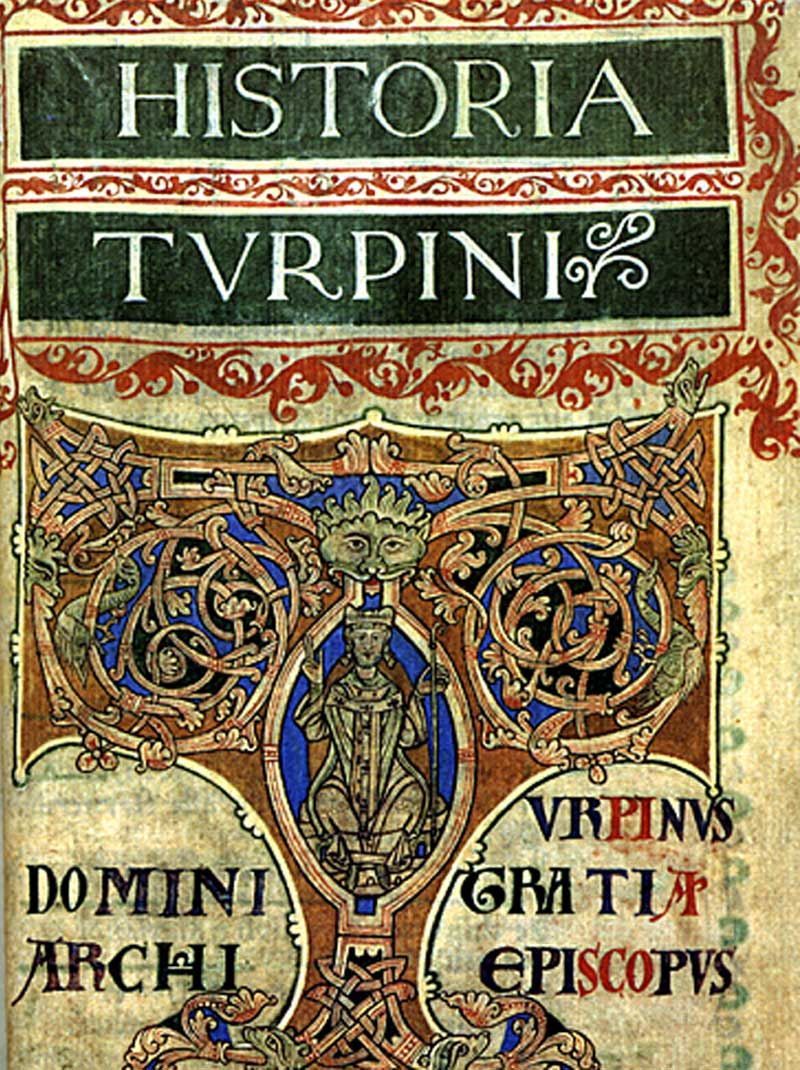 The Historia Turpini, also know as the Historia Karoli Magni et Rotholandi is the early twelfth century Latin manuscript which forms Book Four of the compilation known as the Jacobus, the hagiographical texts devoted to the cult of the Apostle James of Compostela.

The narrative, occasionally interrupted by homiletic passages, is an account of the emperor Charlemagne’s Spanish expedition. Each episode contains a miraculous dimension and the whole text is in ultimate service of the Galician shrine.

Written in epistolary form, the text is purportedly written by Charlemagne’s archbishop Turpin of Rheims and addressed to a dean of Aix-la-Chapelle. It claims to be a first hand report.

For this reason most historians refer to it as the Pseudo-Turpin although it is also commonly known as the Historia Karoli Magni et Rotholandi or History of Charlemagne and Roland.

It was an exteremely popular text during the medieval period with numerous manuscripts being copied. Using an episodic structure and divided into approximately thirty chapters, the History is an account of the Franks’ fourteen year campaign, climaxing with the battle of Roncevaux. Although some of the names are different the essential components of the Roncevaux episode are identical to those recounted in the vernacular Song of Roland.

The narrative begins with a vision of Charlemagne’s in which he receives a visitation from Saint James who urges him to free Spain and his tomb in Galicia from the Saracens.

The emperor assembles a Frankish army and after taking the city of Pamplona, the Saracens of Spain surrender the whole of the peninsula.

Victorious, Charlemagne then visits the shrine at Santiago de Compostela to fulfil the demand imposed on him by Saint James.

Converting the Saracens to Christianity, they remain for three years receiving tribute from the Moors which they use to build a series of magnificent churches including a new cathedral at Compostela.

The emperor’s campaign appears victorious and he returns to France, however a new Saracen leader, Aigoland emerges from Africa and retakes Spain.

Charlemagne, obliged to return then defeats the Saracens once more on the plain outside Sahagún before departing once more for France where the focus of the campaign enters a new stage as Aigoland seizes the town of Agen. After a seven month siege, Aigoland escapes up the river Garonne and the process is repeated at Saintes.

Charlemagne then follows the fleeing Aigoland to Pamplona with an even greater army. Again, Charlemagne defeats the Saracens in a battle outside Pamplona and this time Aigoland himself is killed.

At Mont Garzim in Navarre a battle is fought with that Saracen king of Navarre named Furra.

The war enters a new phase with the arrival at Nájera of a giant leading an army of twenty thousands Turks of Babylon. The giant challenges the Franks to single combat, defeating allcomers until challenged by the paladin Roland, who kills him with a sword thrust to the navel, his only vulnerable spot.

Following this the Franks capture Nájera.

The war now moves south to Cordoba where six thousand Franks are confronted with ten thousand Saracens assembled from the principalities of Andalusia. The Saracen soldiers wearing demonic masks, and beating loud drums terrify the horses of the Frankish cavalry who are forced to beat a retreat. The problem is solved by blindfolding the horses and blocking their ears.

Victorious again, Charlemagne generously divides Spain among his people and holds a council at Compostela, decreeing it to be the Metropolitan See.

The culminating drama now unfolds, the ambush at Roncevaux and the martyrdom of Roland, Charlemagne’s nephew and most illustrious warrior. With the Franks finally returning to France, Roland is placed in command of the rearguard as it crosses over the Pyrenees. Meanwhile, the treacherous paladin Ganelon has plotted with the Saracens, Marsile and Beligant. After the main Frankish army has gone over the Cize Pass, they ambush the rearguard. Roland, wounded and dying becomes a martyr.

Distraught, Charlemagne rushes back too late and then destroys the Saracen force near Saragossa. Ganelon is executed by being torn limb from limb by four wild horses. The returning Franks bury their dead at various hallowed sites

Finally at Saint Denis, Charlemagne is absolved of his sins in a dream on his deathbed and receives the crown of martyrdom.

The last chapter of the book consists of a letter by Pope Calixtus II which is a call to arms for a crusade in Spain.