Périgeux: The Shrine of Saint Front

After the Blessed Leonard, one must visit in the city of Perigueux the remains of the Blessed Fronto, bishop and confessor who was ordained as bishop in Rome by Peter 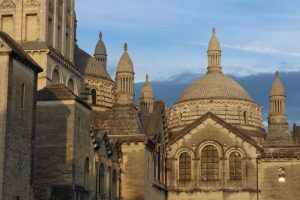 The shrine of Saint Front at Périgeux was a major station of the pilgrimage road to Compostela. From Limoges, pilgrims traveling to Santiago de Compostela along the old Roman highway reached, after seventy miles, the old city of Perigeux.

There, they made their way to the collegiate church which housed the relics of Saint Front, one of the shrines which the Pilgrim’s Guide recommends as an essential station.

The church was vast and imposing surmounted by no less than five large domed cupolas. 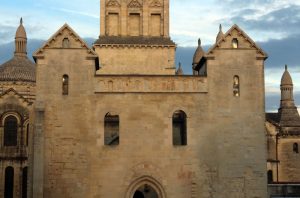 Inside, the saint’s tomb was hugely impressive, set inside a replica of Constantine’s church of the Holy Sepulchre at Jerusalem, the stone structure was decorated with a wealth of carved figures.

“His tomb does not resemble the tomb of any other saint”, the Guide tells us, “indeed, it was built with the greatest care in a round form as the sepulchre of the Lord, and it surpasses in beauty and its admirable workmanship the sepulchres of all other saints.” 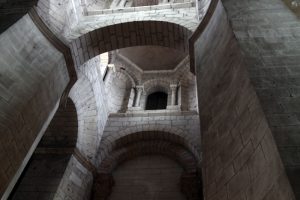 The origins of Saint Front’s cult remain mysterious. His earliest hagiographers have him growing up in the Dordogne area and becoming a hermit but already by the very early medieval period his reputation began to exceed his regional surroundings and by the eleventh century Front was accounted to be one of Christ’s original seventy-two disciples.

On the façade a relief of Saint Peter handing Front a pastoral staff reminded visitors of the Apostolic status of this saint and his most famous miracle. 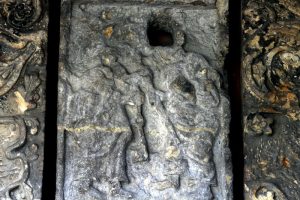 The legend of Saint Front informs us that he was ordained bishop of the city of Périgeux by Saint Peter himself. When one of his companions died en route from Rome to France, Front returned and was given Peter’s staff in order to bring his acolyte back to life.

As the Book of Saint James has it, “Thanks to the staff of the apostle, the Blessed Front restored his companion from death and converted the city of Périgeux, by his preaching, to Christ. Also, he rendered it illustrious through many miracles and died in it in all dignity.”

Today very little remains of the original twelfth century church largely because of the work carried out in the nineteenth century by architect Paul Abadie, whose restoration was so extensive as to rather warrant the term recreation. The octagonal edifice surrounding Front’s tomb was destroyed during the Wars of Religion in 1575.