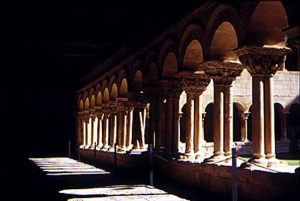 A short distance south of Burgos in Castille, the Benedictine monastery of Santo Domingo de Silos has a double storied cloister which contains on its north eastern pier one of the most sublime images of the pilgrimage roads.

It portrays the the Gospel story of the Journey to Emmaus. Immediately after the Crucifixion two disciples travelling from Jerusalem chance upon a fellow traveller they call a stranger. Only after they have invited him to join them in breaking bread does the stranger reveal himself as the risen Christ 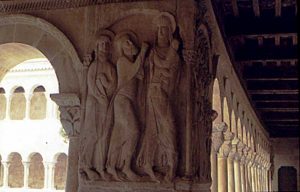 In Latin, the words “stranger” and “pilgrim” are etymologically synonomous. Is this why Christ is here depicted with all the attributes of a twelfth century pilgrim to Compostela, most notably with a scallop shell sewn onto his bag? In a literal sense Jesus appears to be travelling in pilgrimage to the shrine of his own disciple – a strange and anomalous concept but one which says much about the meaning of the Compostelan pilgrimage in the medieval mind.