Jaca and the Kingdom of Aragon

Having climbed over the summit of the mountain, there is the hospice of Santa Cristina, then Canfranc, then Jaca

The town of Jaca was a major way station of the Compostelan pilgrimage. The topography of its location proved beneficial in several ways. From early on, its surrounding area was one of the first enclaves providing shelter for those Christians who fled north from the Arab conquest, the original nub of what eventually became the powerful kingdom of Aragon.

Situated at the confluence of the Aragon and Gas rivers, Jaca was located on the old Roman road which connected Saragossa with France over the Somport Pass. Another road running westwards linked it to Pamplona and at Jaca the pilgrimage road makes a sharp turn westward towards Navarre to rejoin the the main Spanish road at Puente la Reina.

In the early medieval period Jaca was merely the principal town in a region of shepherds and hill farmers. By the ninth century it was controlled by a local aristocrat, Aznar Galindez who had formed protective alliances with Franks beyond the Somport.

It then came under the protection of the fledgling kingdom of Pamplona. On the occasion of the establishment of the new episcopal see of Aragon, the bishop of Pamplona made a donation  in 922, of a tract of land of some six hundred square kilometres between the Aurin and Gallego rivers. After this, the city began to develop an autonomous identity and became the principal residence of the count of Aragon.

This core territory began to expand gradually with the occasional land grabs from the Moors. Then, in the early eleventh century Jaca’s fortunes took an exponential surge upwards  as trade between Africa and Europe was revived via Pamplona, Narbonne and Jaca.

Sancho el Mayor established trade tariffs for the spices, fabrics, gold coin and silks that were passing northward and the pelts, cloth, metals and weaponry that was being transported to Africa via the Somport Pass. 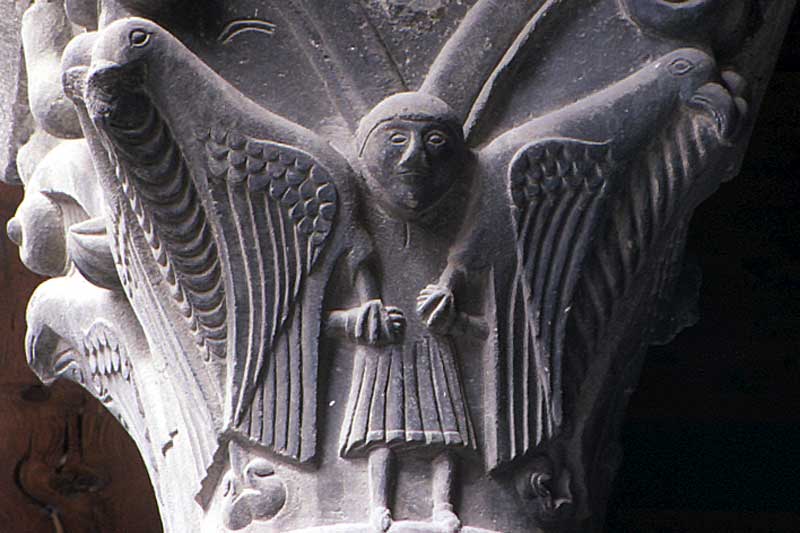 Thirty kilometres from Jaca, a customs house was founded at Canfranc in the narrow gorge of the Rio Aragon, as it ran down from the Somport. In 1063 the city of Jaca was formally established by Sancho Ramirez and grants and fueros were given to encourage the settlement of a population who could add to the commercial prosperity of the town.

Sancho Ramirez further fortified Aragon’s status by placing himself as a vassal of Saint Peter after visiting Pope Alexander II in Rome. Benefiting from its customs rights, Saracen tribute payments and the ever increasing pilgrimage traffic, Jaca became a bustling frontier city and a grand new cathedral was commissioned.

Reflecting Aragon’s new relationship with the pontifical see the cathedral was dedicated to San Pedro. Pilgrims venerated the relics of a virgin martyr of the Saracen oppression. Tradition held that Santa Eurosia had been forcibly betrothed to a Moorish military leader. Rather than succumb she had attempted to flee. On her capture her hands were amputated before her eventual decapitation. Her relics having been discovered by a shepherd were brought to Jaca on the instruction of Sancho Ramirez.

Jaca’s preeminence in the emerging kingdom of Aragon was limited by two factors. In the first place, strategic location as the point of passage between Europe and the south meant that it would remain a way station. Then, in 1098 the episcopal see was transferred to Huesca two years after its reconquest from the Moors and when Saragossa was ultimately captured in 1118, the focus of the expanded Aragon was shifting away from its initial Pyrenean focus.