The Reconquista began at the battle of Covadonga in the Cantabrian mountains in 722.

An eighth century chronicle recounts that, “A certain Pelayo, the swordbearer of the kings Witiza and Roderic, oppressed by the dominion of the Ishmaelites, had come to Asturias”.

Pelayo was a Visigothic nobleman who  had held high position at the court of the old kingdom and had refused to surrender to the new conquerors.

Along with many others, he had taken refuge from the Arab invasion in the mountain fastnesses of Asturias and had declared an independent Christian kingdom. They held their camp on a rocky outcrop named Covadonga

Pelayo met the Saracen force that was sent to quell his rebellion by an old bridge  at Congas de Onis. Carrying the banner of the Christian Chrismon into battle in imitation of the Roman Emperor Constantine at the battle of the Milvian bridge. To Constantine it had been told of the Christian emblem: In this sign you shall conquer.

Like Constantine, Pelayo was victorious and the people of Asturias rallied round his band of fighters and managed to keep the Moors out of the small, beleagured, nascent kingdom.

The Chrismon became the symbol of the kings of the Reconquista and can be found carved above the entrances of numerous twelfth century church in Aragon. It displays the first two Greek letters of the word Christ and the first and last words of the Greek alphabet alpha and omega. 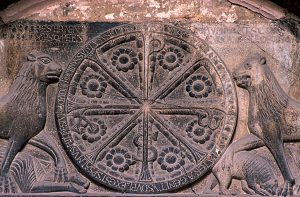 This is a reference to chapter 1 verse 8 of the Book of Revelation: I am Alpha and Omega, the beginning and the ending, saith the Lord, which is and which was and which is to come.

This placed the Reconquista within an eschatological narrative.  In adopting this paleo-Christian symbol, the Christians of Spain saw themselves as God’s Chosen People whose struggle against the Moors thus became an integral part of the working of Abraham’s covenant with God through history towards the Apocalypse.