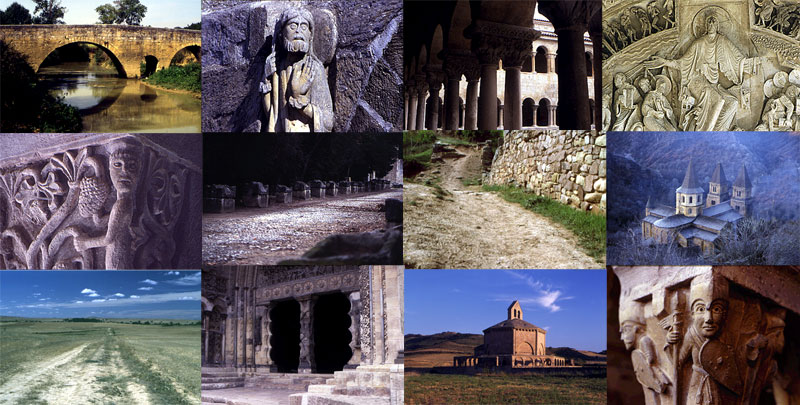 Everything goes back to the Jacobus, the Book of Saint James, a compilation of hagiographical texts dating from the mid twelfth century.

A strong wish not to include any anachronistic ideas and to attempt to grasp something of the culture of the world of that twelfth century pilgrimage, however impossible that may seem, is one the motivating forces behind the content below.

Time passed more slowly a thousand years ago. Ideas and stories which, with the passage of centuries would have lost any sense of contemporaneity in our modern world, still retained a vital hold on the imaginations of men in medieval times.

To look at a Romanesque sculpted image on a twelfth century church is surely to be stirred by conflicting impulses. On the one hand, there is the profound sense of the otherness of the culture being expressed, while at the same time there is an equally profound sense of connection to it.

Vézelay, Arles, Saint Gilles, León, Moissac, Conques, Toulouse and Santiago de Compostela are just the most illustrious names of places where one can be transported back to another time.

Amongst numerous others, they are the locations of twelfth century pilgrimage churches featuring large scale stone sculpture, bound together by being stations on the great pilgrimage roads across France and northern Spain to Santiago de Compostela.

The imposing stone carvings which can still be seen at these churches throw a light on a world as far removed from our own as it is possible to imagine. A world whose dominant cultural force was religious.

Pilgrimage was predicated on the cult of the saints and the miracles reported at their shrines. Massive movements of humanity took place as people flocked to venerate saintly relics. Within pilgrimage culture the world view and notion of time were ultimately defined by the certainty of impending Apocalypse.

This meant an ordering of society which involved a tripartite division, essential  in this eschatological scheme. Each constituent part providing a mutually beneficial role  for the others. The poor labouring to feed humanity, the aristocracy advancing the cause of Christendom by force of arms and the monks providing the possibility of salvation to the dead as well as the living.

The pilgrimage to Santiago interacted with the political order of twelfth century Europe in a complex web which is hard to untangle. The road to Compostela was the spine of the Christian kingdoms of Spain. Rulers promoted the pilgrimage to repopulate their regions, bring wealth and crusaders. They expressed their power through the construction of great Romanesque building programmes.

Perhaps the most emblematic expression of the inextricable connection between the spiritual and the political is the case of the Leonese census, whereby the kings of León-Castile contributed vast amounts of gold, extorted from the Moorish princes of Andalusia, towards the building programme of the largest church in Christendom at the Burgundian abbey of Cluny in return for the promise of continuing prayer for their personal salvation to be made there.

These concerns all find their reflection in one way or another in the great sculptural ensembles of the twelfth century which are the most resonant legacy of a disappeared world.