In the middle ages, Montpellier was celebrated for a cult centered on a miraculous Black Madonna at the church known as Notre-Dame-des-Tables.

According to the Pilgrims Guide the southernmost French route to Santiago de Compostela “Crosses Saint-Gilles, Montpellier, Toulouse and the pass of Somport”.  This is the route generally known as the Toulouse Road, and as with its description of the other three French routes, the Guide is brief in the extreme. 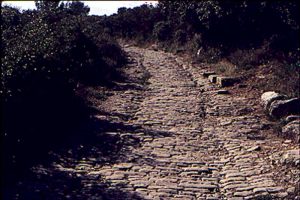 Historians and specialists have attempted to add more definition to these routes by including information provided in the chapter which lists the saintly relics of the road recommended for veneration. Montpellier is anomalous in this context in that there is no mention of a cult. As at Notre-Dame-du-Puy, there was a celebrated Marian cult in existence in the twelfth century but unlike in the example of Le Puy en Velay, it is not included in the designation given in the Guide.

After Arles and Saint-Gilles, pilgrims to Compostela continued to Spain by way the shrine of Saint Saturninus at Toulouse some taking the road which led them up into the mountains to reach the abbey of Gellone while others continued along the Roman Domitian highway towards Béziers and Narbonne. This route crossed Montpellier.

The origins of the city lie in the period of Saracen invasion of the region and the destruction of the nearby cathedral island town of Maguelone by Charles Martel to prevent the Saracens from using it as a foothold in the region. Refugees were drawn to Montpellier and the neighbouring town of Substantion.

A good number came from Moorish Spain and the town was able to benefit from the rich cultural mix provided by this new population. This led to its development as one of the great centres of learning of the middle ages exemplified by its celebrated medical school.

The cult of the Virgin was celebrated in the church of Notre-Dame-des-Tables, so-called because of the tables used by the money lenders in the immediate vicinity. Returning from the First Crusade, Guilhem V de Montpellier brought with him two notable items. The relics of Cleopas, a disciple of the Road to Emmaus and a black Madonna which he donated to the church of Notre-Dame.

In the early ninth century the Count of Substantion had paid for the construction of a small church at Montpellier dedicated to the Virgin Mary. Consecrated in 817 by Ricuinus Ist, bishop of the abandoned cathedral of Maguelone it was established on the site of a Roman temple dedicated to the Goddess Vesta.

Vesta was the Goddess of the flame of the hearth. It is worth noting that the likelihood of a preexisting Druidic cult is not to be ruled out and the  Celtic name for fire “visc” would provide an etymological  link to add to the religious one of Vesta and Virgin, given that the cult of Vesta involved a sacred fire which was maintained by the priestesses of the temple who were obliged to pursue a regime of chastity, the Vestal Virgins. The sacred fire was for the protection of the city.

The most striking of the miracle stories to emerge from Notre-Dame-des-Tables seems to be the product of long tradition. When Montpellier was affected by an outbreak of plague which was decimating the town, in the fourteenth century,

the inhabitants constructed an enormous circular candle with which they surrounded the city walls and set to burn. In ceremony they wound up the giant burning candle and processed to the church where it was laid before the altar. As the flame diminished so did the plague.

Vesta was referred to as Mater, the Mother who had a beneficent influence on the argicultural cycle, a reflection of this can be detected in another of the Virgin of Montpellier’s miracles. During a time when great drought threatened the harvest of the region, the Magestat Antiqua was taken in procession to the river Lez and ritually submerged. By the time the black Madonna was returned to the altar at Notre-Dame-des-Tables, the rains had already come.

The miracles of Notre-Dame-des-Tables were well known throughout medieval western Christendom. In the early thirteenth century the Cistercian chronicler, Caesarius of Heisterbach wrote, “There is at Montpellier a church dedicated to Saint Mary where the cures are so numerous and so brilliant and to which, the doctors, in spite of the resources of their famous school send their patients”.

The medieval churches of Montpellier suffered greatly during the French Wars of Religion of the sixteenth and seventeenth centuries. Notre-Dame-des-Tables was attacked three times, finally in 1794, leaving nothing apart from the crypt and a fragment of Romanesque sculpture.

The Bridge at Saint Thibèry