Another goes through Notre-Dame of Le Puy, Sainte-Foy of Conques and Saint-Pierre of Moissac 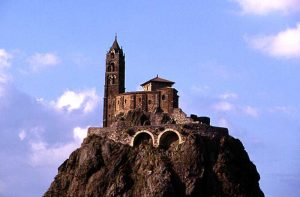 The Puy Road was one of the four French pilgrimage roads to Santiago de Compostela. In the year 951 the bishop of the Auvergnat town of Le Puy-en-Velay, Gotteshalk led the first recorded pilgrimage from France to Compostela. On his return it is said, he ordered the building of the church of Saint Michel de l’Aiguilhe on top of one of several volcanic pinnacles which rose from the ground of that geologically strange town, like a finger pointed at the heavens.

The road of Le Puy was frequented by the Burgundians and the Teutons according to the Guide. They passed through the cathedral town of Le Puy,  situated in a small depression on the high plateau of the Auvergne.

There they venerated a black Coptic figure of the Madonna and a miraculous druidic dolmen known as the Stone of Fevers.

This route led through rugged and inhospitable regions but in spite of the difficulties, its popularity was assured because it passed by way of the abbey of Conques, one of the most important reliquary shrines in Western Christendom, 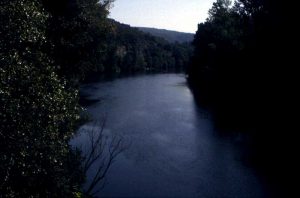 There they found the golden statuette when encased the relics of a saint of prodigious miracle working powers. This was Sainte Foy a virgin martyr of fourth century Roman persecutions. Great numbers flocked to this shrine which became a major station on the pilgrimage to Compostela.

Passing along the valley of the Lot River pilgrims venerated the relics of Saint Hilarion, martyred at the hands of the Saracens in the eighth century at Espalion.

Along the Lot river, pilgrims received assistance at the important abbeys at Figeac and Marcilhac before coming to the greatest monastic centre in southern France at Moissac.

Video: The Puy Road at Marcilhac