Of the days’ journey on the Apostle’s road 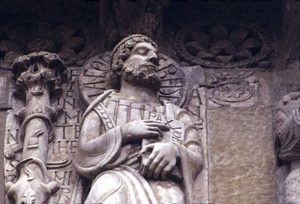 According to the Pilgrims’ Guide, the Camino was divided into thirteen stages. During the great florescence of the Compostelan pilgrimage in the twelfth century, travellers reached Santiago by a variety of ways. Some came by sea,  others from El-Andalus and Merida up the Via de la Plata. Only one of these itineraries was set down in writing and that was the road from the Pyrenees, the so-called French Road or Camino Frances.

This route is recorded in the Jacobus, that twelfth century medieval manuscript devoted to the cult of Santiago de Compostela which contains a chapter entitled “The Day’s Journey on the Apostle’s Road”.

In contrast to the scant account afforded the four roads through France in the previous chapter, the level of detail here given to the description of the Spanish road is revealing by the manner in which it is so clearly defined.

Stylistically the text takes its form from the itineraries which were drawn up for the Roman legions, which measured journeys in units of distances travelled per day.

It specifies two routes over the Pyrenees, either the Somport pass or the Cize and Roncevaux. Beginning at the village of Borce on the French side below the Somport Pass, the first route consists of three days journey to Puente la Reina in Navarre from where, the text tells us a “single road leads as far as Santiago”. From Borce to Jaca is the first day, Jaca to Monreal the second and Monreal to Puente la Reina, the third.

The second route is described from the village of Saint Michel Pied-de-Port “at the foot of the pass of Cize on the Gascon side”. From there the journey is divided into thirteen uneven stages between way stations of a day’s length. It is worth noting that according to these instructions the pilgrim would cover an unlikely average of over fifty kilometres per day.

Thus the first stage is between Saint Michel and the Navarrese village of Viscarret; the second, Viscarret to Pamplona, the third is Pamplona to Estella, the fourth, Estella to Najera, the fifth goes from Najera into Castile and the city of Burgos. The sixth is Burgos to Fromista. Across the meseta the road heads into Leon from Fromista to the Cluniac bastion at Sahagun which is the seventh days’ journey. The eighth is Sahagun to Leon, the ninth Leon to Rabanal, the tenth to Villafranca del Bierzo in Galicia. Villafranca to Triacestela is the eleventh, the twelfth goes as far as Palas and then finally the thirteenth to Compostela itself.