Roncevaux stood at a pivotal point on the pilgrimage road to Compostela both in spatial and also sacred terms. The story of the great battle which was fought there was told and retold. 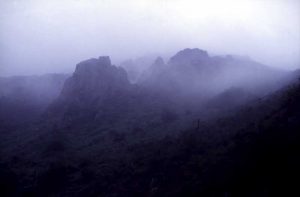 Located adjacent to the highest mountain in the Pyrenees as it was then believed, it was the first significant point on the Spanish side of the mountains. The mountains had marked the frontier between Christendom and Islam which in the early middle ages, carried the weight of momentous Apocalyptic import.

When the Historia Karoli Magni et Rotholandi stated that Ephesus was on the right hand of Christ’s earthly kingdom and Compostela on the left, it was Roncevaux and Roland’s sacrifice which had made pilgrimage there possible. It was the Vale of Thorns, the site of the necessary sacrifice.

According to the History of Charlemagne and Roland, the story begins when the Franks having succesfully conquered Moorish Spain, stop at Pamplona en route to their homeland.

The nearby city of Saragossa was ruled by two Saracen kings, Marsilius and Beligrand. Nominally they are Charlemagne’s subjects but their loyalty is feigned.

The Frankish count, Ganelon acting as Charlemagne’s emissary presents an ultimatum to the two rulers: convert to Christianity or pay tribute. Ganelon then hatches a treacherous plot. Between them, they arrange that Marsilius will pretend to agree to rejoin Charlemagne in France in order to be baptised but he will betray his promise and attack the Frankish rearguard after the main body of the army has gone on ahead. 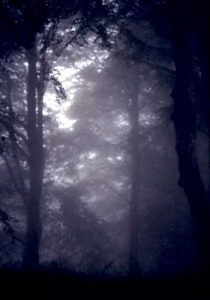 Ganelon persuades Charlemagne to leave Roland and his close companion Olivier in charge of the rearguard where they will be prey to the planned Saracen ambush.

Dividing their force in two, the Saracens attack first with twenty thousand men. Battle rages all night before the Franks have defeated their enemy. Exhausted, the Christian warriors cannot withstand a second onslaught of thirty thousand Saracens which now comes down on them.

Olivier is flayed alive and only a small handful of Franks remain standing. Among them, Roland who captures a Saracen and forces him to identify Marsilius who he then kills.

Beligrand and the other Saracens now retreat.

Walking to the foot of the Cize Pass, Roland tries to smash his sword Durendal against a boulder in order to prevent the mighty weapon falling into the hands of the enemy. The sword is too strong and cannot be broken and only the rock is split apart.

Now in an attempt to recall Charlemagne and the body of the Frankish army, Roland sounds his horn, the elephant ivory Olifant but the ferocity with which he blows the trumpet forces it to split in half and for the veins and nerves in his head to burst leaving him mortally wounded.

Hearing the sound of the Olifant in the valley below, Charlemagne is prevented from going to his aid by further treachery from Ganelon who insists that Roland is merely out hunting.

Dying, Roland prays and confesses before his soul is carried by angels to heaven.

Knowledge of Roland’s plight finally reaches the Emperor when Baudoin arrives with the news. Charlemagne immediately sets out for Roncevaux but arrives too late.

Grief stricken, the Emperor now takes his revenge and takes off in pursuit of the Saracens. The sun stands still for three days until the Franks reach the remaining Saracens, destroying them on the banks of the Ebro river near Saragossa.

When rumours of Ganelon’s treachery are heard a duel is arranged in order to ascertain his guilt. Theoderic acting as Charlemagne’s champion kills Pinabel who stands in for Ganelon, who is now quartered and dragged to his death by horses.

The Franks now take their fallen comrades back to France to bury them in sacred sites.

The account of the battle of Roncevaux forms one chapter, albeit a vital one in Turpin’s History. The Song of Roland devotes its whole narrative to the legend, rendering its Apocalyptic dimension with greater emphasis.

This is most evident in the episode of the Olifant.

Despite Olivier’s pleas, Roland refuses to blow his horn to summon Charlemagne to his aid until it is too late.

When he does, it can be heard thirty leagues away but now it is merely to recall Charlemagne so that their bodies will be buried according to Christian rite and that the Franks will avenge the deaths of the warriors of the rearguard.

From the Old Testament Book of Exodus, when it was the prelude to Moses’ vision of God on Mount Sinai up to Revelation, when the seven trumpets of the Apocalypse unleash retribution on those who have failed to heed the Word of God, the trumpet was associated with the voice of God.

When Roland sounds his trumpet it is to unleash the retribution of Charlemagne on the Saracens. The force of his trumpet call causes his blood vessels to burst. It has become an act of submission on the part of the Frankish hero to the Divine power and so the cause of his death and martyrdom

In the final battle against the forces of Baligant, the Olifant is carried as a standard at the head of Charlemagne’s Christian army.

On the crenellations of the fortified belltower of the abbey of Moissac, above the great tympanum of the Apocalypse, a stone carved representation of a lone warrior stands facing the Pyrenees. He is sounding an elephant ivory horn.