According to the medieval text known as the Pilgrim’s Guide, the Road to Santiago de Compostela passed over the Pyrenees. It came to be referred to as the Camino Francés, because it reached Spain from French territory and was the principal conduit for pilgrims to journey from the rest of Europe to the remote shrine of Santiago in Galicia. Beginning in Gascony at Saint Michel, (Villa Sancti Michaelis), it was replete with the legends of Charlemagne. Located near modern day Saint-Jean Pied de Port, Saint Michel was the base where stood a monastery and a hospice dedicated to Saint Vincent.

From Saint Michel, the Guide describes the ascent over the mountains as being eight miles long. There were two main routes which led to the summit of the Cize Pass, (Portibus Ciserei). One led to the peak of Monte Astobiscar and the other following the valley of the Nive via Valcarlos, named after the location where Charlemagne’s army was encamped while Roland and the Frankish rearguard were being ambushed by the Saracen force at Roncevaux. 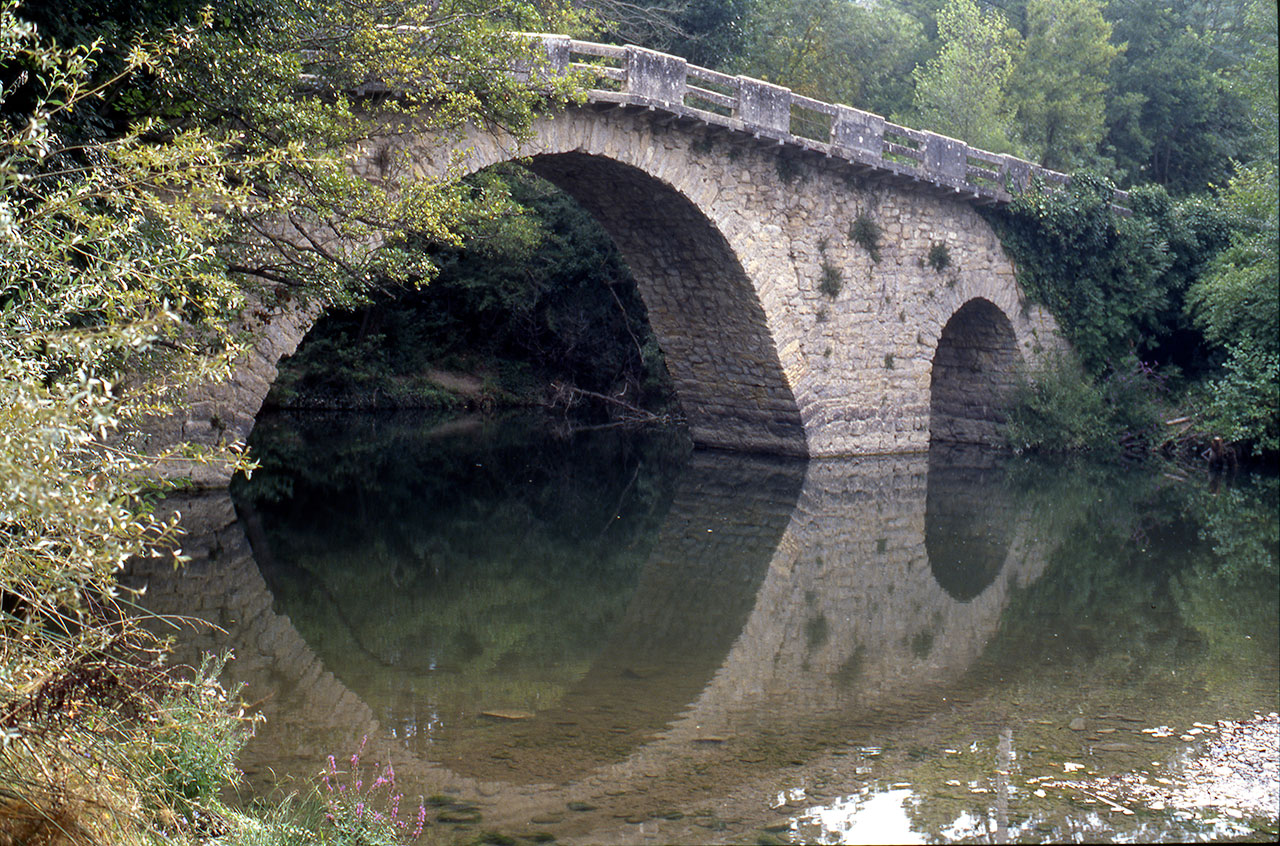 The routes met at the Cize Pass, below the mountain where Charlemagne had planted his legendary cross as he began his Spanish expedition. The Guide declares that from the summit the panorama included views which extended as far as the English Channel to the north and the Atlantic Ocean to the west. Just below was the valley and site of the battle of Roncevaux, (Runcievallis) where a monastery and substantial hospital (Hospitale Rotolandi), a dependency of the abbey of Conques cared for pilgrims.

From Roncevaux the Camino descended towards Pamplona via Viscarret, (Biscarellus) and Larrasoaña, (Ressogna) where there was an Augustinian abbey belonging to San Salvador de Leyre

Viscarret, according to the Guide, was the station, which marked the end of the second day’s journey from Saint Michel. 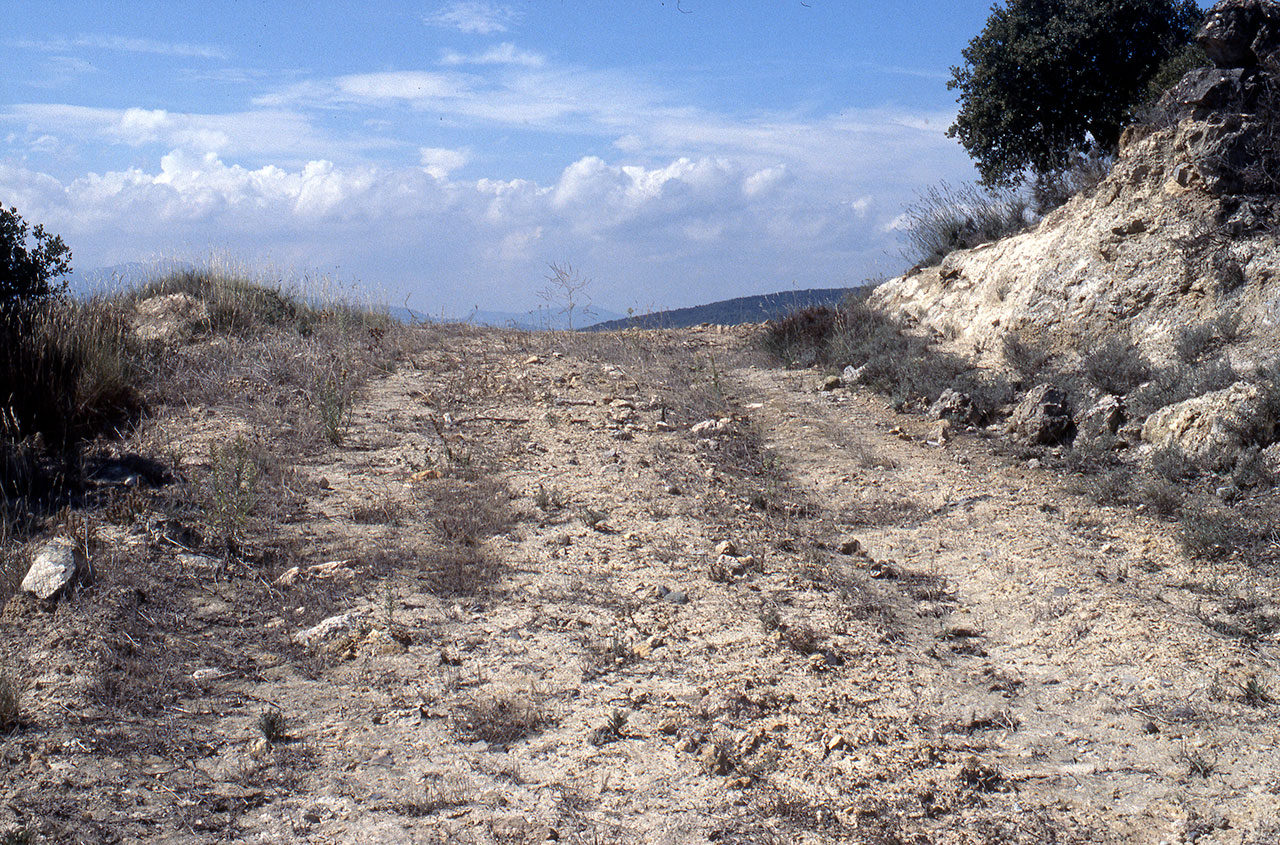 Pilgrims entered Pamplona, (Pampilonia) over the Puente de la Magdalena which spanned the Arga River. Adjacent to the bridge was a hospital for lepers.

Capital of the kingdom of Navarre, Pamplona was a major station on the Camino de Santiago. According to the Guide it was the stopover which marked the end of the second day’s journey.

Pamplona had entered into the mythology of Charlemagne when, according to the History of Charlemagne and Roland, it was the first city taken by the Frankish army as it commenced its Spanish campaign three centuries before. The city fostered the pilgrimage with the establishment of a number of benefits for trades which were directed towards the new influx of pilgrims. Privileges were also bestowed aimed at encouraging settlement, so that Pamplona prospered greatly from the Compostelan pilgrimage.

One of the city quarters was given over to French settlers by Alfonso el Batallador in 1129 to encourage the city’s expansion and was named San Cernín after the patron of Toulouse.

The cathedral of Santa María was a major Romanesque work, built under the guiding hand of the bishop Pierre d’Andouque who had such an important role in the development of the Compostela pilgrimage around the turn of the twelfth century. Many builders and sculptors who worked on the cathedral of Compostela were also employed in the construction of Santa María. 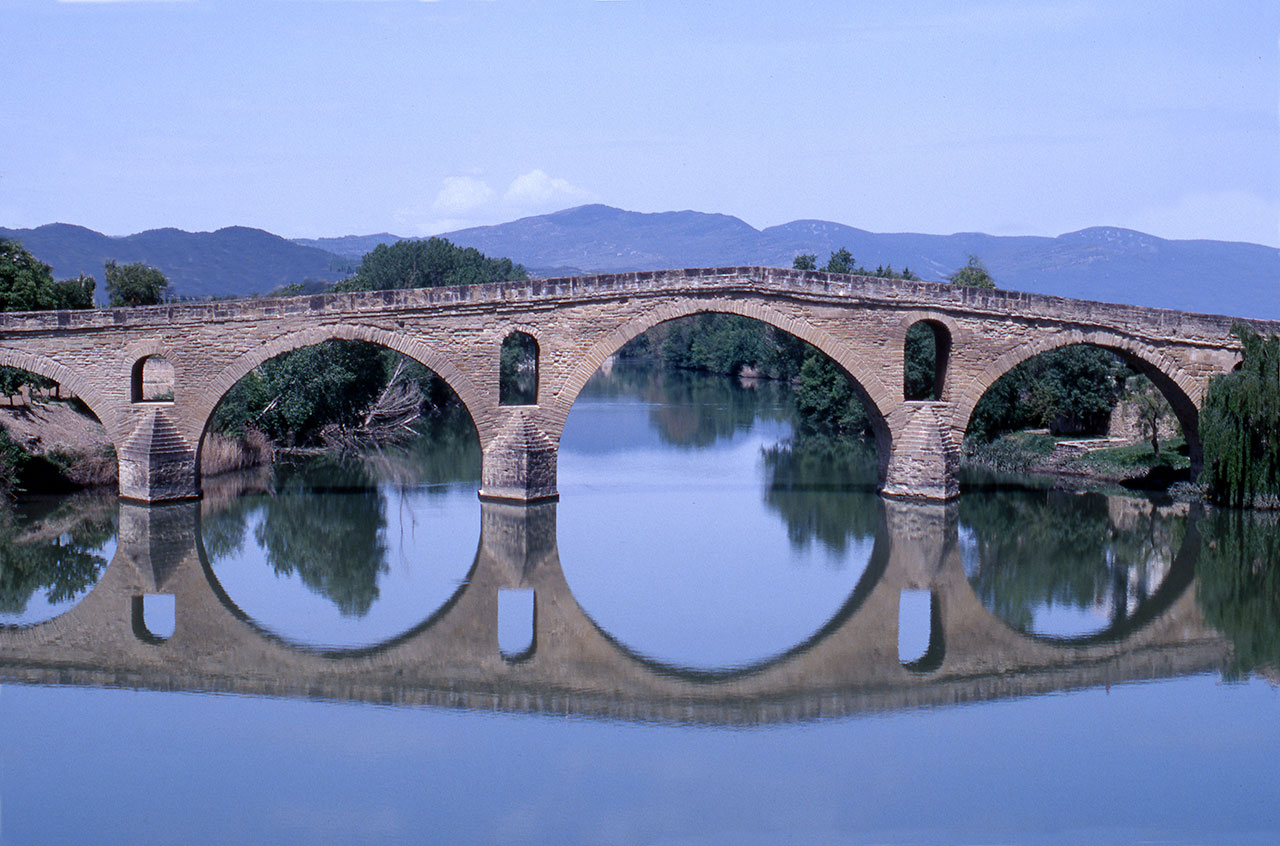 From Pamplona the camino descended southwards to Puente la Reina, (Pons Regine) and a five-arched bridge across the River Arga. Although unclear exactly which queen had sponsored its construction in the second quarter of the eleventh century, it is speculated that it was in fact wife of Sancho El Mayor who gave her name to the bridge.

This is the very bridge referred to in the Pilgrim’s Guide which declares that the four roads from France converge there to form a single road all the way to Compostela over four hundred miles westward. The Knights Templar were stationed at Puente la Reina for the protection of pilgrims and the town was built around the eastern end of the bridge, receiving numerous privileges in the early twelfth century from Alfonso El Batallador, who ruled the joint kingdoms of Navarre and Aragón from 1104 to 1134.

Beyond Puente la Reina, the Camino used occasional stretches of the old Roman road which left Cirauqui over another bridge towards the Río Salado, which the Guide warns was dangerous to travellers because of its poisonous water and the treacherous locals.

By the early twelfth century, the road which had originally passed by the Benedictine monastery of Santa María la Real de Irache, separated at Villatuerta and passed a few kilometres northwards to the new town of Estella founded in 1090.

Estella, (Stella) was a town expressly established to foster and aid, as well as to profit from the increasing pilgrimage traffic. As the Guide tells us, it is a town which “overflows with all delights” as well as marking the end of the third day’s journey.

The monastery of San Pedro de la Rúa looked down on the Camino which passed below, directly opposite the Navarrese royal palace. On a hilltop on the other side of the valley was the church of San Miguel.