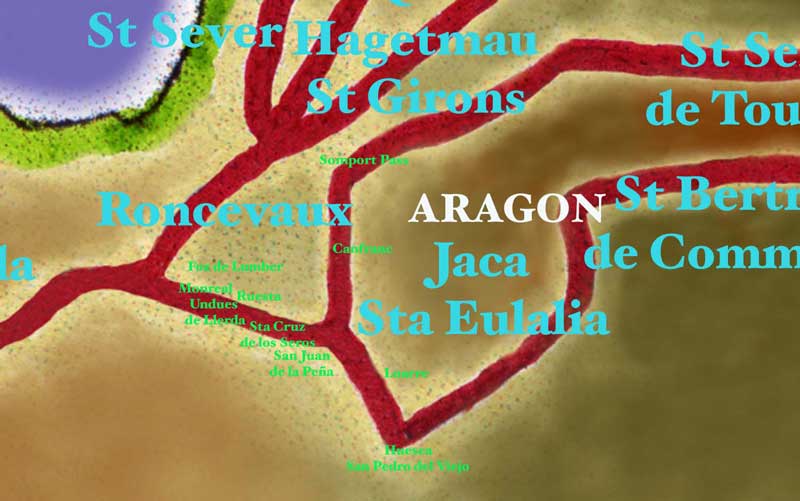 Initially the most popular route into Spain for pilgrims to Compostela, it has been traditionally considered that the passage over the Somport Pass was later restricted to those using the so-called Via Tolosana, from Arles. However its more central position along the Pyrenean chain suggests that the Aragonese Way drew travellers from a wider area.

A number of old Roman highways continued to serve medieval travellers. From Carolingian times a monastery at Siresa along the Hecho valley was strategically placed to assist the mountain crossing using the Palo Pass where there was an old Roman road. There, pilgrims benefited from an important collection of relics which included bones of the saints Andrew, Stephen, Benedict,

Adrian, Lupercius, Medardus and Sebastian as well as a relic of John the Baptist and a piece of the Holy Cross.

However with the development of Jaca and the retreat of the Moors to the plains, the pass at  the Somport became the the standard route from Oloron.

Just below the pass, which stands at 1640 metres, was the great monastic hospital of Santa Cristina of which the Guide speaks with so much effusion. This was protected by the fortress at Candanchu. Along the right bank of the fast flowing Aragon river, the road descended gradually the thirty kilometres to Jaca, passing Canfranc where a customs house was set up in the mid eleventh century to deal with the increasing amounts of trade which were now passing between the Peninsula and France carrying goods from as far as Africa.

The rugged and desolate gorge through which the road threaded its way, made the travellers easy pickings for thieves,

as evidenced in the naming of an overlooking summit as the Coll de Ladrones – thieves’ hill.

At Canfranc a bridge led over the river which could quickly become a raging torrent, to the left side. The road continued due south, on one side the castle at Castiello de Jaca and on the other the Monte del Apostol which rises to 1362 metres.

Jaca was a bustling frontier town, made prosperous by the passage of pilgrims and traders. As the capital of the early Reconquista, the royal coffers had been swollen from the money extorted from the Moorish taifa of Saragossa.  At Jaca pilgrims also had the opportunity to vist the shrine of Santa Eurosia at the cathedral.

Leaving Jaca via the bridge of San Miguel. the road followed the course of the Rio Aragon for a hundred kilometres as it turns due west, the high peaks of the Pyrenees visible to the north. A short distance to the south among the rugged

According to the Guide the stages following Jaca were Osturit and Tiermas. Tiermas was renowned for its “continuously running hot royal baths”. Alternate routes were available to pilgrims and the left bank of the Aragon river was favoured because there were fewer affluent streams to cross as well as an old Roman road, by contrast the right bank of the river received the fast flowing streams that ran down from the Pyrenees.

By the town of Osturit an important bridge crossed the Aragon after which, pilgrims continued along the river past the fortified hilltop town of Esco to Tiermas and Liedana.

The great massif of the Sierra de Leyre rises up here and on its slopes the celebrated monastery of San Salvador, a short distance from the camino.

San Salvador de Leyre was the oldest established abbey of the region and in the early days of the Reconquista had served as a refuge for the kings of Pamplona. This association of resistance towards the Moors was further emphasized by the presence in the abbey’s crypt of the relics of the saints Nunilo and Alodia, two sisters who had been martyred during the persecutions of Abdur Rahman II in 851.

At Ruesta there was a fortress built by the Moors in the ninth century but which they had been forced to abandon and was now taken over by the Christians. The town had a hospice for pilgrims and a monastery San Juan de Ruesta.

a road led south of the Aragon river via Undues de Llerda over hilly terrain towards the fortified town of Sangüesa. This was highly favoured as evidenced by the development of  the latter into an important pilgrimage station with its seven arched bridge. Alfonso el Batallador king of Aragon established his royal palace here and numerous hospices existed to care for pilgrims.

At Sangüesa, pilgrims headed north, crossing the Aragon once more over a massive bridge at Yesa leaving it to follow its southern course as the road headed northwestward along the valley of the Rio Elorz to Monreal avoiding  the Sierra de Izco. 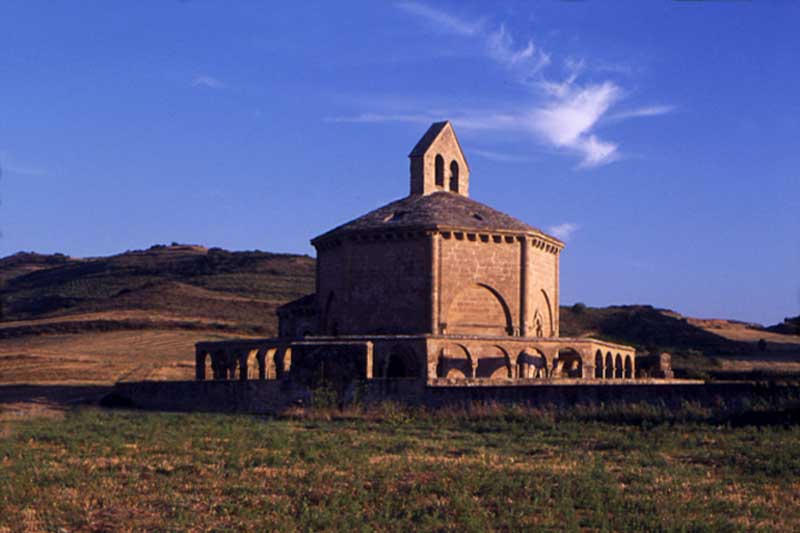 Just before joining the main Navarrese route at Puente la Reina, the road passed by the church of Santa Maria de Eunate. This octagonal church surrounded by a cloister arcade took its round design from the church of the Holy Sepulchre at Jerusalem. It may have belonged to the Knights Templar and been a funerary chapel to honour those pilgrims who had died en route.